One of the big storylines in the new Pirates of the Caribbean: Dead Men Tell No Tales is with Brenton Thwaites as Henry Turner, the son of Elizabeth Swan and Will Turner. With Orlando Bloom back in his role as Will Turner for the first time in more than a decade, we see him first in a father and son moment. Albeit, Papa Turner is sort of dead and sporting some face barnacles, and it’s a young Henry in the scene, the moment is touching. It’s when Brenton hits the screen the new faces of the Pirates franchise 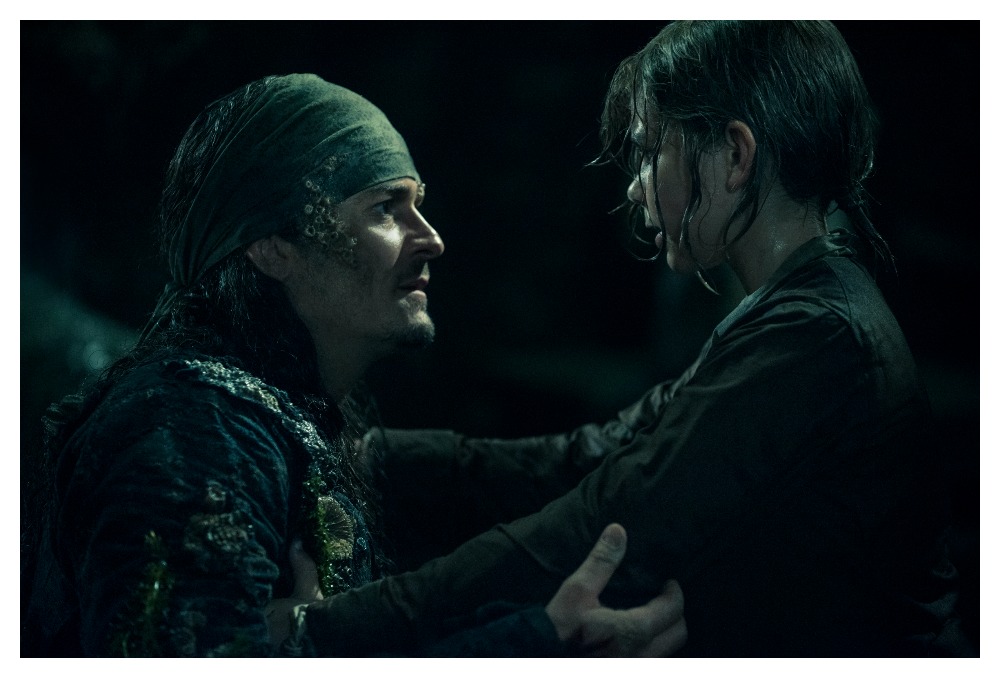 If you haven’t had the opportunity to see Pirates of the Caribbean: Dead Men Tell No Tales yet, you may want to come back to this interview after. There are some spoilers in this post and I encourage you to come back after you have seen the movie.

Hi, guys, how are you? I didn’t think I’d get applauded on my entry. I just saw Javier, and he was preparing me for this…

What did he say?

Did he tell you what to say?

I said, “They are at home with the kids!”

So how did you become involved with the film?

I auditioned multiple amounts of times here in L.A., and then I met the directors at a place in Venice Beach. Then the movie got put on hold for awhile, and I re-auditioned about a year later, or a little bit more. I met Jerry Bruckheimer and the producers, and then I just, and then I got the part out of nowhere.

What’s it like stepping into such a huge role as Elizabeth Swan and Will Turner’s son?

I feel as though as it was kind of easier than not having them because they provided such a backstory for my character. Dead Men Tell No Tales starts with the boy version of my character, basically saying, I believe there’s a treasure that can break your curse, and I can spend more time with you. And he says, “Okay, well if there is, go find Jack Sparrow. He can help you find it.” So I feel like the goal and obligation for my character have already been set. That gives Henry a lot more drive and focus for the whole movie.

What was it like working opposite Johnny Dep and the iconic Captain Jack Sparrow?

It was terrifying. (we laugh) It’s always terrifying because you never know what he’s gonna say or do, so it always results in humiliation for me. So you are always entering a scene thinking this guy now is five movies worth of Jack Sparrow. And he’s on the ball and you know, irreverent and impulsive. You just anticipate what he’s gonna do and say, so that’s great because as an actor it improves your acting in the sense that you’re always open and free and relaxed to go with the flow, but also pretty terrifying.

Since filming, you’ve become a father?

So what is it like now that you’ve done a few Disney films that one day your baby’s going to see?

Well, it’s great being a part of Disney because as a studio, it plays for the younger audiences. I did a movie in 2014/2012- released in 2014 called Maleficent which something I can’t wait for my daughter to see. Pirates may take a while just because it’s quite scary, you know? Maleficent is, as well, but I know there are moments in Pirates where I kinda even get scared. So I think it might take a while. I don’t know when- maybe until next year when she’s two. (laughing)

So being that you are a newcomer to the Pirates franchise, do you feel like they value your input?

I think they did value my input as an actor and as a newcomer. There were so many different characters coming into this one to make it a fresh new thing, and I think all the old-school dudes wanted to make it fresh and exciting. It’s something they hadn’t done before. So Javier coming on board, myself, Kaya, and the two new directors who primarily had done independent films, were supported and encouraged on this one.

You were recently named the breakthrough performer of the year. How does that feel?

It’s great. So when I first heard of CinemaCon and that I was to get that award, I had no idea what it was, to be honest. I did a bit of research and looked at the guys that had received that award in the past five/ten years and kinda just went, wow, I don’t think I’m in that caliber of an actor with those guys. But just to be even considered or thought of in that same group of those actors is exciting.

What was it like when you first walked onto the set and saw everything?

I was thinking, wow, it’s rained because my first day on the set, it had been pouring for months or weeks, and the town in Saint Martin, which was a farm town called Maudsland, which was about twenty minutes west of the studio, was covered in mud. Everything was, and they kinda used it in the movie which is really cool and dramatic. It adds to the dirtiness of the pirate’s world. I remember thinking, “I’m gonna have to get some new shoes.” (laughing)

It’s squelching, and it’s like in an hour, you’re squelching around. But I had a scene where my character, Henry is hiding behind a pillar, and he’s spying on Jack Sparrow. I remember thinking, wow, what a perfect way to start the movie, to see Jack Sparrow drinking rum in the middle of the street, and the whole parade of red soldiers trying to catch him.

The visual effects are amazing.

The visual effects side of things was mostly kind of behind the actor’s consciousness. In Maleficent, it was a lot of work that we would have to do with our imaginations to be specifically creating creatures that weren’t there. On Gods of Egypt, we did the same thing, but on Pirates, we were lucky because all of Javier’s makeup; all the ghosts were there. They looked fantastic.

The sets were real. You know, they, they had beautiful set pieces that allowed us to play and feel like we were actually in the space. The CG, I guess I was surprised to see Javier’s hair, you know.

Mainly it is the background, the CGI stuff which gave it this great depth of field when you watch it. But for us, we were lucky that we had so much given to us on the day.

What’s a typical day on set?

A typical day, I get picked up eight o’clock. And then I get made up and sit in the trailer for five hours, and then we start working, (laughing).

We’d meet for the logistics; sets changes, and every day there was something crazy happening. They like to give the directors all the tools to play around with, so we would all come to work; Javier and Geoffrey would get in makeup, and we would all be ready in case they wanted to do some improvised shot or something. We were always ready so that they could use any actor at any time. So it was a cool way of shooting, but it meant that I got better at learning my lines very quickly.

Did you do any special training to play Henry?

Just sword fighting. I had a few hand combat fights that we more or less on the day. The sword fighting stuff, we trained three weeks before principal photography.

Was there anything else you had to do to get prepared for the role since it’s kind of a period piece set back in the 1790’s.

I had to do a little accent work, but I’d done it many times before, so I just slide right in that British RP dialect.

You had a lot of scenes with Johnny Depp, how hard was it not to laugh while shooting?

Listen, if you guys look closely, Kaya and I are behind the scenes just trying not to laugh.

What is your hope that audience takes away from the film?

I just hope they’re entertained. This kind of movie with all the genres slotted into this two-hour gap. It’s the kind of movie that never loses its drive and has so many action pieces- set pieces; comedic elements; romance; supernatural; there’s something for everyone in this movie. So I hope, I hope everyone takes something from it and connects with the characters.

Speaking of set pieces, did you take anything from the set?

If I told you I’d have to kill you. (laughing) No, I didn’t, but if this ever gets back to the producer, I would’ve liked to have taken a rowboat. My mum is in the corner over there; I told her, I told her before we wrap the movie, that I would bring her a rowboat home and make a veggie garden out of it.

That’s sweet. We will tweet that to the producers!

Yeah. Get me my rowboat.

How many different locations did you travel and do you have a favorite?

We shot at about five or six different locations; mainly the studios. I was talking about Saint Martins Square twenty minutes west of the studios where all the mud was. We shot there for a good month and a half, and we shot in Northern New South Wales; they had a beautiful beach- both Hastings Point for our entrance into Saint Martins.

And my favorite location was up on Hamilton Island, shooting out on the Great Barrier Reef. We had some days at a beach called White Haven Beach which is a beautiful squeaky beach. You know, when you walk on the sand, it squeaks which is not so good for the sound, but it’s great for effect, and it looks beautiful, and I think we had the most fun right there.

Javier mentioned it as well.

Oh, Javier’s like a five-year-old kid, you know?As soon as he finishes a scene, he and his mate Juan Carlos are stripping off (their shirts), jumping in the sea, playing, and like fighting in the sand. It was the funniest thing I’ve ever seen.

We’d love to see that.

Well, I hope it’s in the bloopers reel!

Check out my other Pirates of the Caribbean posts from the #PirateLifeEvent. 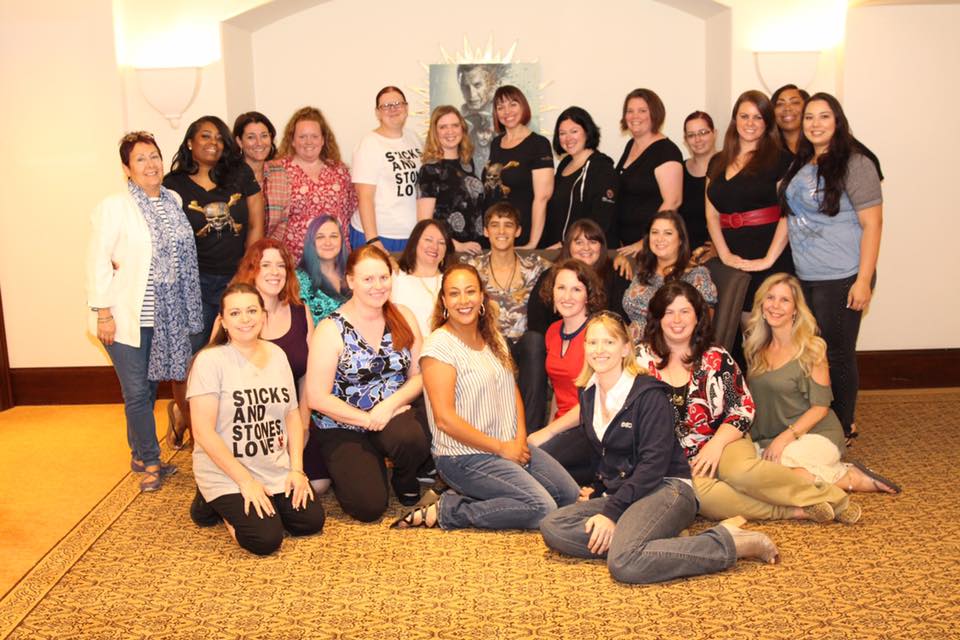