Directors Byron Howard & Rich Moore were smiling ear to ear when then arrived for the press junket to talk about all their efforts put into their latest Disney animated film Zootopia. With years of hard work starting with an idea of a world of animals, where people never exist, it’s really amazing to see them beam with excitement to finally share this creative masterpiece with the world.

Both directors are past Oscar nominees. Byron directed “Tangled” and Rich directed “Wreck It Ralph.” I think it’s safe to say, this is quite the dynamic due for a Disney film. After seeing just a few clips last time we spoke, it was fun to finally to have seen the whole film, leaving so many questions that they so graciously answered.

Sitting in the Animal Kingdom Lodge with the directors of Zootopia, Byron Howard & Rich Moore, kinda brings everything full circle.

Can you share what it feels like to have started the research here at Animal Kingdom and here you are now?

Rich: The circle of life. It all works out, right?

Byron: I finally understand it now. That was very, very company specific. (To Rich laughing) That was very good, thank you.

This was one of the first places that we came. Like after we pitched the idea of the movie, what we start with is research. And we talk about in a lot of these presentations. And the fact that this company has this amazing animal preserve, which is honestly, it is the best in the world. Like if you look at the animals they’re in herds. They’re moving around these amazing environments that feel like a real African environments and Asian environments.

The Kilimanjaro Safari is a must with at #AnimalKingdom #ZootopiaEvent #Disney

And the fact that we could take that real knowledge and these great animal experts and incorporate that knowledge into the film, it was amazing for us. And, so we stopped here first. We went back to LA and told. John Lassiter about our findings here. And he said, that’s amazing. But the next step you guys gotta do is actually go to real Africa and we’re like, Africa? And he’s like, Africa. And he sent us. And we took 14 of our leadership over there. And it was a good compliment for this place. When we landed in the Savannah of Africa we stepped out of these tiny bush planes. It felt like this. They did such a good job here in turning Florida into (a piece of Africa).

Africa was a life changing experience for us all. I think all of us came back honestly changed. We’ve been very fortunate with these jobs because they send us on terrific places all over Asia and Europe and South America. But Africa, for me, I had never been any place that kinda changed you down to your core.

And just to see nature, like full on nature right there. It really made us feel like, okay, if we’re gonna do this movie, we’re gonna do it right. And we came home just full of all this information and this great passion, for what we’re gonna create with Zootopia. And I think that’s why the crew dug in so much. We geeked out on all this stuff. And it came across in the film because all our crew cared so much.

The movie really talks about diversity, tolerance and acceptance. How do you tell that story so that it resonates with kids of all ages?

Rich: Well, that was very important to us that this wasn’t just an adult movie. That it was playing on some kinda lofty level that a child would be like, I’m not getting this at all. I don’t relate to it. It was important to us that Judy’s kind of journey, and her as a character, a child could relate to her. We knew if this is a story about discrimination and being put in a box, by other people, then Judy has to have a moment where that happened to her. That’s why we chose that. It was at the hands of a bully when she was young. You know, as a little girl. And a little bunny, because, unfortunately, I think that adults and children can relate to those moments. Unfortunately, I think that all of us have had those moments. Some more than others, but it’s relatable. So, that’s why we chose to have that happen to her as a child. It kind of became very relatable to both a child and an adult of what this movie was about.

Which animal was the hardest or the most difficult to anthrop  omorph?

Byron: That’s a good question. There were a lot of them that were challenging. Even Judy’s landlord, who’s an armadillo. It was a question of how does that character get her clothes on? Over the shell? 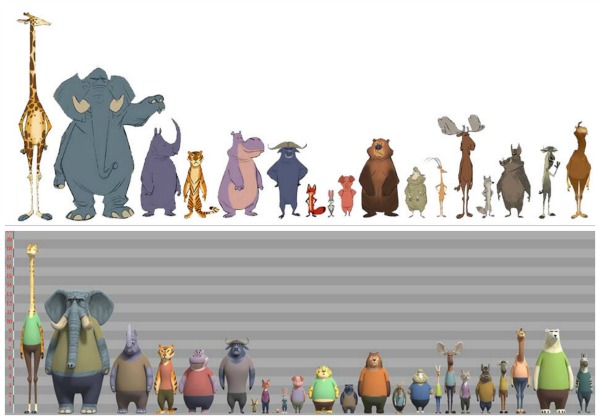 Byron: Well, we had a few story sessions where we were thinking like, well, what would be good jobs for animals? Should we go against type for some? Should some be very kinda on the nose? Our head of story, Jim Reardon, he kinda said, “How about sloths working for DMV? That could be a funny scene.” It was kinda one of these things where everyone was quiet for a moment. And thought like, has this been done before? You know, it seems like such an obvious joke or situation. We quickly went to the Internet and like, sloth at the DMV. No, no, no, no. Oh, my God. I think we found something that hasn’t been done yet. And again, we like to keep it on a level of that a child could understand. That to them they’re watching Judy who’s in a hurry at the mercy of a sloth who’s slow. Then for the adult, it’s like, oh, yeah, I know the DMV. That’s happened to me. Then also we wondered, well, is this universal like around the world? Do they have like the DMV in other countries? And I am happy to report the frustration with red tape and bureaucracy is well known everywhere. Every place that we’ve screened this around the world they’ve said like that reminds me of our blank. You know, of a department just like that.

Rich: She loves sloths. Did you see that clip from Ellen? Where she was like breaking down?

We said, we have one line from this scene…God, do you think she would do it? And we were trying to figure it out, because it would be perfect if she did the voice. We’re talking with our casting director, Jamie Roberts, and we were talking about, well, how do you go to someone like Kristen Bell and present like this idea, will you do one line that is literally words two words? You know? We’re thinking, like, okay, how do we approach Kristen with this idea and Jamie said, “Why don’t I just text her? Right now. I know her. You know? Forget this, we’re going about this the wrong, let me text her. Let me ask her”. She literally kind of, you know, “Kristen, would you like to play a sloth that has one line in the movie?” Then five minutes later,  we got talking about something else. And then Jamie said, oh, by the way, Kristen just texted back. She’s in.

Bryon: A real a real quick story, ‘cause we’re talking about seeing that scene around the world, and we had a really nice experience in Belgium. ‘Cause they showed it in French, Belgium French and also Belgium Flemish. When we were watching the Flemish audience watch the DMV scene and there was this father and this little boy. The father watching the Flemish movie he was cracking up at the sloths and the DMV. His little boy was watching his dad and he’s smiling at seeing his dad crack up at this lady. So, even the little boy who was like four, didn’t get the scene. He was getting such a kick out of watching his dad crack up. It was just the sweetest thing.

The script is really, really smart. Watching my dad at 72 down to my niece who’s 10 love the movie equally, it was really fantastic to experience that with my family.

Byron: Thank you. I think we tried to include as many of the audience as possible. ‘Cause we’re adults making these movies.

Rich: It’s rumored. Yeah, on the outside.

Byron: We’re kinda children inside. But the like the kids aren’t necessarily gonna laugh at the Breaking Bad reference, or the Godfather reference. But the adults get it. And it’s funny, ‘cause when Rich and I watch audiences see the film, we can kinda predict when the adults will laugh and when the kids will laugh. And to hear the giggles when the Godfather turns around in the chair, or when we mention Jessie and Walter…

Rich: Just on a personal level, that’s what I loved growing up, shows or movies or cartoons or books where I knew I was enjoying it. But I knew that my brother was getting it on some level. And that my parents were laughing at something. And it made me feel like, well, someday I’ll get that. Whatever it is that they’re getting but I’m getting my thing, you know? And then as an adult, you know, I to go to movies with my kids, and when the film makers where giving my children something and that didn’t feel like that they were speaking down to me or down to my kids. That there was something in it for me in it, too. I’m just always like that. And everything I’ve ever worked on in my career, I always try to kind of give service to everyone in the audience. Not just one group of people. So, that’s what we do.

And they did it perfectly!