So what is Zootopia? Well, in the world of Zootopia, humans simply don’t exist. This makes Zootopia a modern civilized world that is entirely made up of animals. They walk on 2 feet, wear clothes and use technology just like we do today. 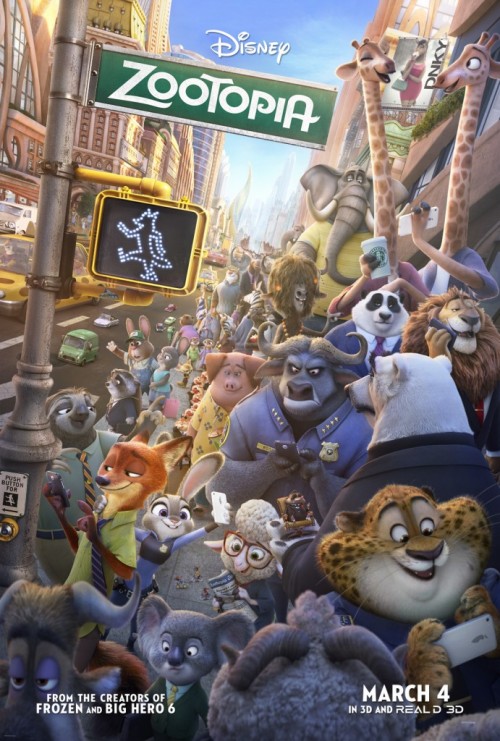 In Zootopia, you’ll find mammals from all over the world and even though all the animals coexist, that does’t mean that they all get along, meaning natural enemies in our world are natural enemies in Zootopia. So for us, this is where the story of Zootopia begins. And for me and my family, this movie is so highly anticipated for it’s so funny. Did you happen to see this trailer? Seriously, WATCH! I promise you will laugh.

The modern mammal metropolis of Zootopia is a city like no other. Comprised of habitat neighborhoods like ritzy Sahara Square and frigid Tundratown, it’s a melting pot where animals from every environment live together—a place where no matter what you are, from the biggest elephant to the smallest shrew, you can be anything. But when rookie Officer Judy Hopps (voice of Ginnifer Goodwin) arrives, she discovers that being the first bunny on a police force of big, tough animals isn’t so easy. Determined to prove herself, she jumps at the opportunity to crack a case, even if it means partnering with a fast-talking, scam-artist fox, Nick Wilde (voice of Jason Bateman), to solve the mystery. Walt Disney Animation Studios’ “Zootopia,” a comedy-adventure directed by Byron Howard (“Tangled,” “Bolt”) and Rich Moore (“Wreck-It Ralph,” “The Simpsons”) and co-directed by Jared Bush (“Penn Zero: Part-Time Hero”).

The makers of Zootopia

Behind this brilliant animation is Producer Clark Spencer and Directors Rich Moore & Byron Howard. During a press trip for Disney, I had the chance to chat with these three and learn about the process behind the Zootopia.

Clark shared, “We tell modern stories, we tell fairy tales, we have films, and animal films and human films and animals and humans (together in films). There are all types of stories which always has 4 key ingredients. One, we strive to tell timeless stories for today’s audiences. Two, we make these movies to be entertaining for people of all ages around the world. Three, our films must contain both a combination of great humor and deep emotion. And four, these films have to live up to the standard of Walt Disney. After all, his name is on each and every one of these films.”

What is it that sets Zootopia apart from any other talking animal movie you’ve seen?

Byron: John Lasseter said from the very beginning, if we were going to do a talking animal movie, it should be animals for animals not just people in animal costumes kind of acting like humans. It should really come from how animals relate to one another, and especially predator and prey.

Can you share a little about the thought process that went behind having everything within the world accommodating animals of all sizes from elephants to mice?

Clark: Zootopia is a world created for and designed by animals not by humans. Because this city has animals of every shape and size from jumbo to itty bitty, from the elephant all the way down to the mouse, which you can see by this very scientific chart, this scale was going to be a very important ingredient. From the beginning, we all agreed we wanted to be able to have the true size of each animal. What’s interesting is in most animal movies just go to a generic size, it’s just simple. But we didn’t want to do that. We wanted to use the true size of the animals. 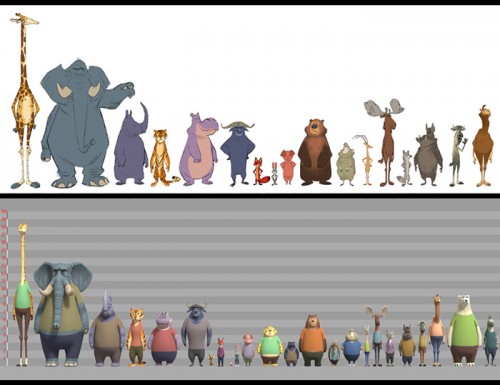 Rich: You want the world to feel alive. And then you want to put scale in there. I think people don’t quite see how hard that is because think about where the camera has to get placed. You have that scene with Nick and that huge Elephant and that little teeny fennec fox and you think well, you can’t just do your normal over the shoulder with a camera because these characters are magnitudes different in terms of height. So where do you put that camera?

The wildebeest is the same size as your average human. But the scale of a wildebeest to a mouse is 1:24. In other words, it’s the height of 24 mice as you see on the right side there to equal the same height as a wildebeest. And the height of a giraffe, that same mouse is 1:95. Which means we have to think about how these different animals of different sizes move and live within this world of Zootopia, that Zootopia had to be built for everyone.

What can you share about the relationships between the animals?

Byron: The animals are quick to put each other in a box, stereotype one another. Elephants remember. Weasels are sneaky. In Zootopia, the cops are all large animals. They’re animals like buffalos or hippos or rhinos. She’s [Judy] taking a huge step out of her box as a little bunny to become a cop, but she is super determined.

What about the look, the world of Zootopia is a place you feel like you want to visit.

Clark Spencer: I also wanted to make sure that the world of Zootopia, not just the characters in it, felt alive. To help accomplish that, we created technology that we call “Keep Alive” where the world always had some level of movement. We created a wind simulation that allows us to place vegetation into an environment and have the individual leaves and branches move. While the average viewer is not going to notice it, they will feel it. 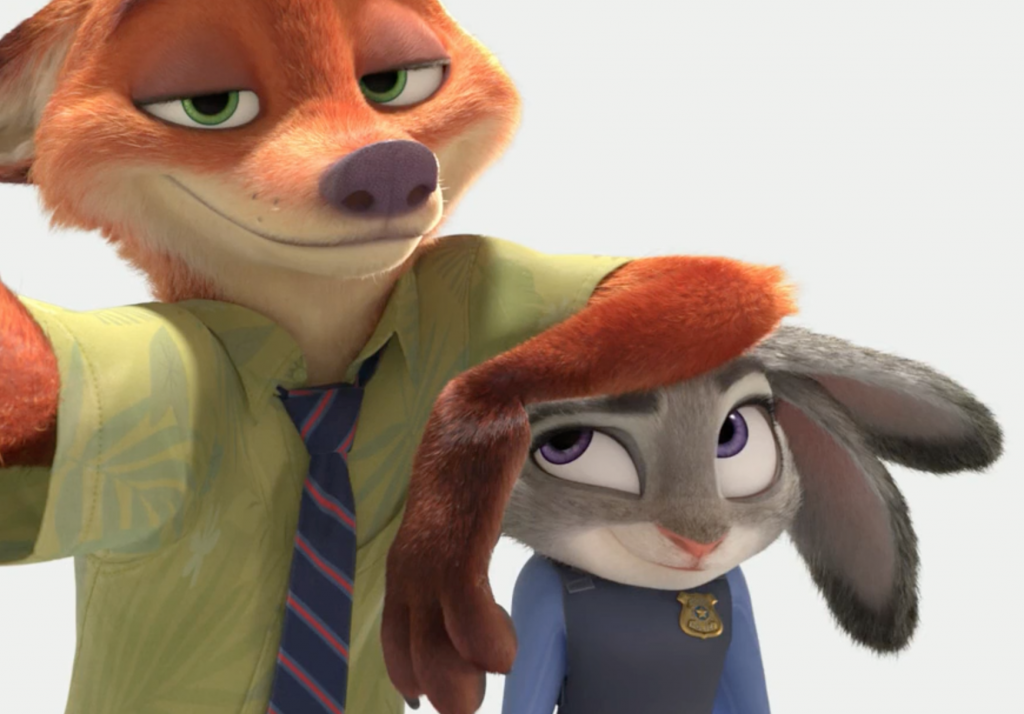