What do you think of when you think of Disney’s The Lion King? For me it’s the music with the sunrise scene. The pang of sadness when Mufasa falls to his death, and of course, possibly my favorite part of the original, Pumba and Timon’s Hakuna Matata. I bet you instantly have it in your head now! 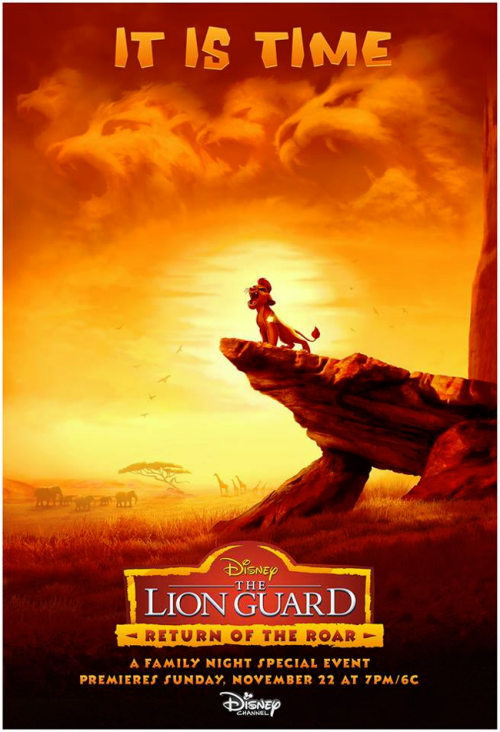 Ford Riley developed and serves as executive producer of Disney’s highly anticipated animated television movie “The Lion Guard: Return of the Roar” and subsequent series “The Lion Guard.” Both the movie and series take place in the world of “The Lion King” and follow Kion, the second-born cub of Simba and Nala, as he assumes the role of leader of the Lion Guard, a diverse team of animals tasked with preserving the Pride Lands.

Disney Channel’s The Lion Guard: Return of the Roar

After watching the 44 minute Disney Channel movie, Disney Channel’s The Lion Guard: Return of the Roar, the message is clear. Riley shared with us how he took inspiration from his son, Quinn, who was then 8. Riley watched the make believe superhero team that Quinn and his friends played in the park. It was the concept of a group of heroes with different traits and qualities who share a common mission to protect others, and that resonated with Riley. This is how it became the inspiration for Kion and the other members of the Lion Guard. He teamed up with Sarah Mirza (Author and Swahili expert), Beau Black (singer/songwriter) and Christopher Willis (Composer) to bring the new adventures to life taking place where The Lion King ended and before the sequel.

The music is what you would hope it to be and Black shared that, “the goal to writing music is to provide a story, not to make a hit. If I am singing it in my head a few days after I wrote it, then I know it will work.”

To keep things true to the core of the pride land animals, we learned that they consult Jill D. Mellen PH.D., Education and Science Director of Animal Kingdom at Walt Disney World outside Orlando, Florida helps on every script. She shared with us the same information shared in this quick background video of the making of Disney Channel’s The Lion Guard: Return of the Roar.

After watching the movie, I think this is a perfect way to bring back the story we fell in love with to a new generation with the story revolving around protecting the pride land and the circle of life, completely staying true to the film. 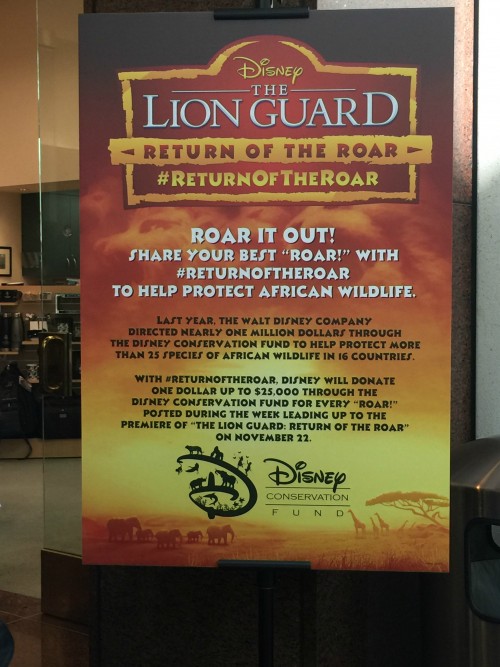 Be part of the #ReturnOfTheRoar campaign where Disney will donate one dollar to $25,000 through the Disney Conservation Fund for every “ROAR” posted until November 22nd, the day of the premiere of The Lion Guard: Return of the Roar.

Tune in this Sunday, 7pm EST and then watch for the 26 half hours shows beginning in January and follow along on social media.

*I was invited by Disney on a press trip covering The Lion Guard to share with my readers. All opinions are my own.