Do you talk to your pets? I do. Currently, have two cats, and since I work from home, I find myself having full conversations with them throughout the day. I think this is why I loved Downward Dog on ABC, a story about Martin (voiced by Samm Hodges), a lovable and loyal dog and his owner, Nan (Allison Tollman). The show has a great storyline about Nan’s life told from the perspective of her dog. Martin provides a uniquely unfiltered point of view, which gives great incite about what it means to be a human being in the twenty-first century.

While in Los Angeles for the #GOTGVol2Event we had a chance to sit down with Samm Hodges, not only the voice of Martin but also the co-creator and producer of Downward Dog and Allison. It was easy to see they are proud of this show, as they should be, it’s hilarious.

A show about a dog and the girl he adores, and even at their worst, Nan and Martin just might be best for one another.

So tell us how Downward Dog came to be.

Samm: Michael Killen and I are co-creators of the show. We were both commercial directors, working in Pittsburg where we created this web series, like four years ago now. Michael had done a lot of stuff with talking animals, like the Taco Bell Chihuahua.

Allison: The yo quiero Taco Bell dog, that’s Michael. He well versed in how to make animals talk and not look like they’re just licking peanut butter off of their faces.

Samm: I was a very unlikely collaborator with him because my writing has always been with way more different brands. I kinda looked down on the talking dog things. I had a little darker tone. One day he was like, “Oh, you just try to write these monologs.” And then I wrote the monologs and when we were trying to cast for the voice I just did a read not for myself to do it but just to be used as an example. And then Michael ended up using that read as the dog, and so that’s how I kinda got shoehorned into that role.

Allison: And then I mean it kinda snowballed from there.  I don’t know if you guys have seen the shorts. They’re online. You can watch them. And they’re, they’re beautiful. They’re what sold me on the project.

Samm: Which she was a bit hard to sell.

Allison: When I read the script I was like, “there sure is a talking dog in this.” (Laughing) Sure is the star of the show. But then I saw the shorts, and I was like, oh, I get it. It’s like sweet and down to earth and kind of indie. And then I was really into it. So, that’s kind of how it came about. Then they wrote this great script, and they had these, awesome shorts to kind of back it.

Samm: We had a lot of interest. It was a big project bringing it from the web series to the show and trying to figure that out, but a lot of that was just trying to figure out how that worked with human characters. In the shorts, it was about how a dog’s view of his own life. And then we realized a dog has such an intimate view of the life of the owner. So it became much more about the character of Nan and him as an angle on her life, ’cause he sees all these moments that no one else was there and he’s there for her. That was a shift, I think.

What kind of dog is Martin?

And his real name is Ned?

Allison: Ned, yes. In the pilot, he had just been rescued and had just started being trained. I was very (laughing) patient. No, he was jumpy. I mean he was a rescue dog and had rescue dog anxiety.

Samm: And he’d been there for a long time.

Allison: Yeah, he was wasting away in the shelter there.

Animal lovers certainly will have a connecting with Downward Dog. What do you hope people will get out of the show?

Allison: I mean I think that this is a special show because I don’t feel like there’s a lot of, if any, TV shows that focus on this relationship which a lot of people. I mean the relationship with their pet is significant. For me, it’s like the most significant relationship in my life. I don’t have kids and I’ve had my cat for 17 years. Like she’s the longest standing relationship of my entire (giggles) life, and I grew up with her. I’ve had her since I was 19 years old.

So transformative power of like loving an animal and being in charge of this little life truly has affected the person that I am, because I grew up with this cat. I was a baby when I got this cat. I think that’s whAt special about it is that it’s a love story that is universal for a lot of people because a lot of people are pet owners and love their animals. But it’s not something that we focus on. We focus on romantic love or familial love, but nobody talks about what a profound thing it is to love an animal.

Samm: I think to choose a focus in this very like small thing about here’s a girl who lives alone [with] her dog in Pittsburg. And…she’s not a movie star. Martin’s always asking if he matters. And for us I think it’s about how these little characters outside of where we usually put the spotlight on and how much our lives do matter. There’s so much comedy and reality to that. But he’s always a character to me. He’s like he’s a mutt in the backyard of Pittsburg asking do I matter. And if he matters, then we all kind of matter. You know, that’s something about that I like.

Can you talk about the process in post-production of making Martin talk?

Samm: So, it’s all in visual effects, but, what’s different is that usually, they’ll kinda replace the entire muzzle, a lot of the face, with CGI. In this case…it is done in post-production, but it’s a lot more naturalistic.

Allison: Any time he has a talking head where he’s just there, they would set up the shot, and then they would have him sit there, and the trainer would be behind the camera, and they’d like let’s make him look over here. Let’s try to make his ears move. So that he stays animated. Like when you talk your face moves. Then after the fact, Samm goes into a voiceover booth and puts a mo-cap stuff on his face so they can capture his entire muzzle. (wink wink) His face.

Samm: I had to cut my beard off for it, yeah.

Allison: So then they can marry them together. So, it’s like Samm’s like facial movements speaking on top of Ned’s face.

Samm: Yeah, and that’s why it looks natural, yeah.

Allison: But his mouth is just closed. He’s just sitting there.

Samm: It’s most fun in the edit to like go through these dogs little eye motions and then time it up with a joke. It’s a lotta fun to find the dog’s real moments then play with that. And like, I’ll like try to perform to his performance and stuff. Yeah, it’s fun. 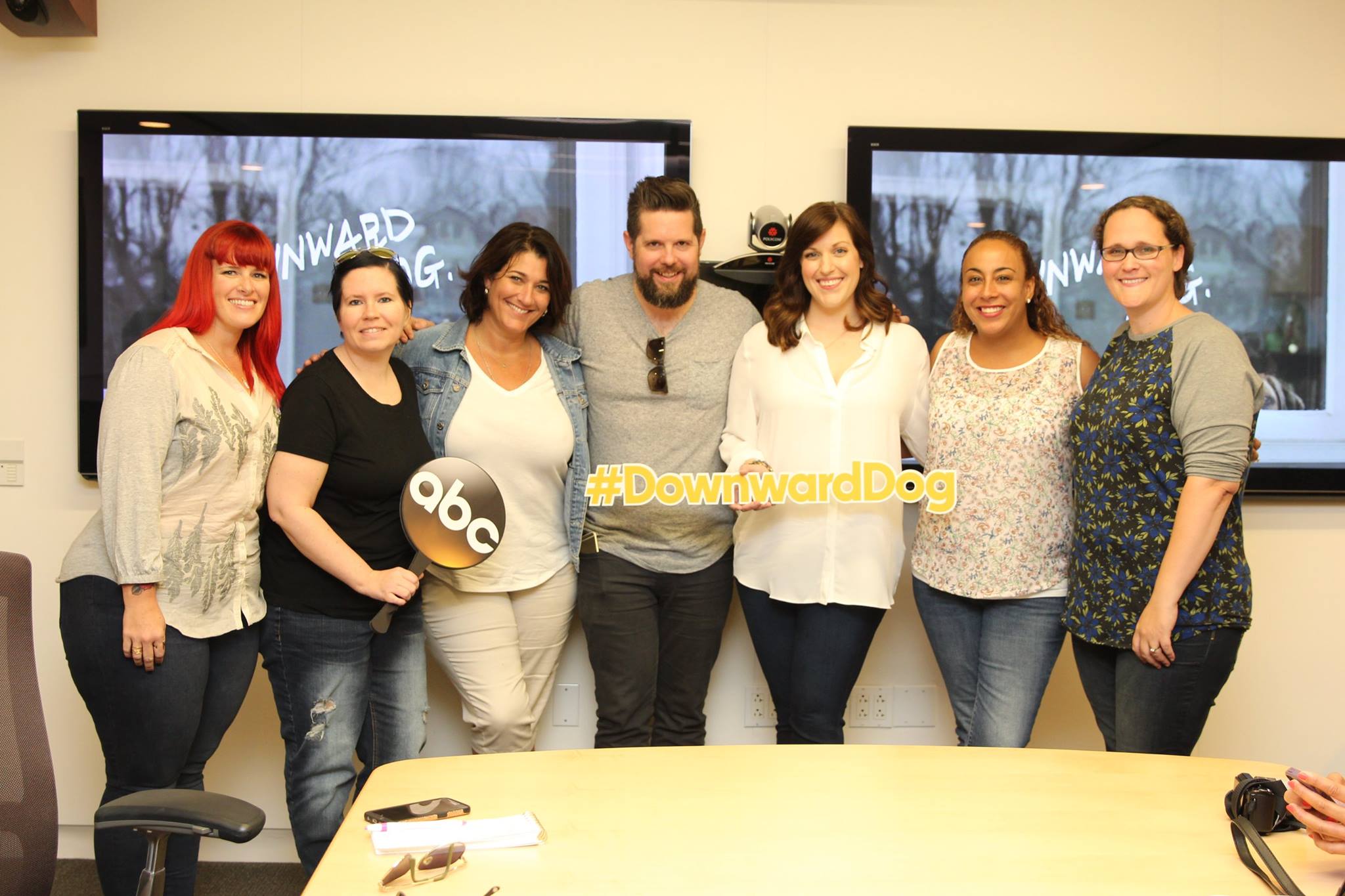 How do you get into that dog mindset?

Samm: As a creator, you write a fair amount, but then we have a full writing staff. We had this rule that like whatever joke we do it’s about what’s a dog’s experience and what’s a human experience. And so it’s always about drawn from our lives as writers. Like basically that I’m a dog in a human experience. And dogs want the same things that we want in this very primal way. In doing this show, I’ve started to think of our humans as animals a lot. Like we just react to things and then later justify our actions. We’re not so logical; I think I started to really relate to that aspect of a dog’s thought process.

So, he’s big at self-justifying. And so, it’s kind of just been, okay, like I self-justify. Or I’ll look at how my wife and I had a fight that night and how I was manipulative about it. (laughing) And then I’ll figure out a way to put that into what a dog wants. It might be a treat or food, but it’s very, it’s very easy to get to thAt point in some ways.

Allison: Can I just say you guys before you go — like we’re just so thankful that you guys are here. We’re so aware that this is such an odd little show and we just really wanna get the word out. We love it so much, and we’re so proud of it, but it’s a weird little show with a talking dog in it. (laughing) So, we’re just so thankful you guys are here to tap an audience that is not tapped by other venues.

I was invited by Disney to attend the #GOTGVol2Event to share my experience with my readers. All opinions are my own.