Yondu and Kraglin are Ravagers in the Marvel universe. To hear what it’s like to play those characters, in this Michael Rooker And Sean Gunn Guardians of the Galaxy Vol 2 Interview you get a good idea. Michael returns as Yondu and Sean as Kraglin, and this time around they are such an important part of the new film. In this interview, they both share what it is like to play their characters, and both of them feel very differently. Sean also acts as Rocket’s stand-in on the set, so he and Michael spent a good amount of time together on the set of Vol 2.

Guardians of the Galaxy Vol 2 Interview

If you haven’t had the opportunity to see Guardians of the Galaxy Vol 2 yet, you may want to come back to this interview after. There are some spoilers in this post and I encourage you to come back after you have seen the movie.

Michael: Oh, this is fancy schmancy stuff. Look, we have a table this time around. Last time we did this, we were like, squatting on a bucket.

There is an array of Vinyl Pop figures on the table, and Yondu is noticeably missing.

Michael: What do I have to do to get one of these figures made of me?

We joke that we left it at the hotel.

Is using the fin at the end going to be a tie-in to number three?

Sean: I don’t know anything other than where I’m to stand and what I’m supposed to say.

Sean:  So, I’d like to think there’s more in store for that character, but I don’t know anything. I mean, I don’t know if anyone knows anything.

Michael: I know everything.

Sean:  Yeah, he knows it all, but he forgets.

Michael: I know everything. I know it all. Five minutes after I know it, it’s gone.

Can you talk about the when you learned that your character Yondu was going to die?

Michael: You know what? I’m used to dying. I’ve died many times in different movies and different TV shows, and it doesn’t hurt at all. It’s okay. I’ll be back, somewhere.

Can you tell us about the makeup process?

Michael: Oh, you know what? Yeah, the makeup process is awesome. Maybe a three-hour process to put on and four or five, six layers of different shades of blue and gold and silver and yellow, flax and all kinds of stuff. And I’m like, what color is this? It’s gold, you know, and sometimes they just flick it on with a brush. You know, they put it on the brush, and they just go and just flick it, and it’s little spackling all over your face. Tiny little dots that helps to bring out the depth of the paint. It just looks like real skin, and it feels like real skin too.

How was it working with the teeth?

Michael: We both could answer that stuff. Oh, we both had some grills, baby. Do we not? You had more of a problem with it than I did.

Sean: Yeah, the teeth can be tricky. I tried to get the teeth made a good several months before we started so that I could just put them in and work with the talking. I think to talk through the teeth in the first movie; it was one of the most difficult things.

Michael: But I didn’t have a problem with it because everybody’s different. Sean can speak English. I cannot. Sean, he uses consonants. I do not almost never. My quality is more throatal and glottal. Sean’s is not. I mean, he can do that, of course. We are trained actors. This is just my quality in that’s how I do it, so thereby, the teeth are up in the front, so I form my words and my consonants and sounds more back, so it didn’t’ bother me at all with the speaking. What it did do, was make it tough for the whistle. A whistle’s all in the front right where the stupid teeth are so we got to fix these because I got to whistle. And so they did pretty well. I had to relearn a little bit of where I focus the sound for the whistling and stuff.

Michael: They enhance it, but it is my whistle.

What is your favorite character besides your own and why?

Michael: Besides your own. You can say me if you want.

Sean: I like ‘em all in different ways. I love Drax. I love sort of the journey that I’ve seen Dave take from his audition for the first movie through a magnificent performance he gives in this movie. If I had to choose, I’d say Dave, but I love all the characters in the movie.

Michael: Yeah, well, I don’t like working with real humans. Never have. I’m going to go with Rocket and Baby Groot. They are my favorite. But that being said, Rocket is my friend right here (referring to Sean), and we worked together day and night doing this. He does all the vocals and all the voice stuff for Rocket.

Sean stands in as Rocket.

Michael: We go through like, how many times when we’re doing a scene? Like, four or five good ones to layer all that stuff.

Sean: We have to do several takes for scenes that Rocket is in. We do a reference take. We make sure we get one or two good ones of those. Then we have to do one with a light. I’m doing the lines from just behind the camera.

Michael: A light. That’s right. Got to do one with a stick. With a piece of tape.

Sean: Got to do one that’s empty. All that kind of stuff. So it’s a whole process.

Michael: So, the process of doing this kind of movie with such heavy CGI and also characters that don’t truly exist. It’s like doing five movies, for God’s sake. I will forever get a whole hell of a lot more money if I ever have to do this again. That being said, I’ll probably never get hired again for this kind of movie. But if ever I do, trust me, guys. Producers out there, you better know you better come with your best offer because I know how this shit works now. And it is hard. It’s difficult.

What has it been like for you Sean to transition from a behind the scenes character to an onscreen character?

Sean: Well to the first point about working with my brother, I mean, we’ve been working together in various capacities since we were little. I have an easier time working with him than just about anybody because we have such a shorthand for communicating with one another. I know for the most part, what he’s looking for so when I read scenes, I have a pretty good feel for what he’s going for. We work together really well. I’m certainly grateful that he gave me such a nice role in this in this film. I have so much to do.

Michael: You owe it all to me. I talked to him about you.

Sean: Did you? Thanks, I appreciate that. I really am happy to be part of it. I know that that’s kind of what I’m supposed to say, but it’s true. It’s a great franchise, and I think that the movies are made with a lot of love and a lot of heart. I’m very happy to be part of that.

Michael: And you should be happy that he didn’t torture you too much.

Sean: No. These guys, what they go through with makeup and stuff is amazing. You hear Rooker talk about having hours worth of makeup and it’s really impressive. He never complains, and so it’s not just going through the makeup process. It’s then also being ready to go and ready to perform and focus. What he, Dave, Karen, and Zoe go through every day.

Do you see the potential of expanding Yondu’s back story into a stand-alone movie?

You just have to get paid more, right?

Michael: Yeah, oh, I will get paid more, yes. (Turning to Sean) Have you ever spoke with these ladies before?

Michael: This is the pinnacle of all the interviews that we have done.

Sean: I agree. I know. We should just do this all day.

Michael: Oh, I could totally do this all day.

What was it like on set filming the death scene?

Michael: You know, it was emotional. Very, very emotional for everyone but me. I was sleeping. It’s true. Swear to God.
Sean: When we’re doing the funeral scene at the end where Chris has his big speech. We’re all super sad and all of the sudden you hear (making snoring noises). Rook was out. So funny.

Michael: Absolutely. I don’t know why. I have no idea. That scene put me to sleep. 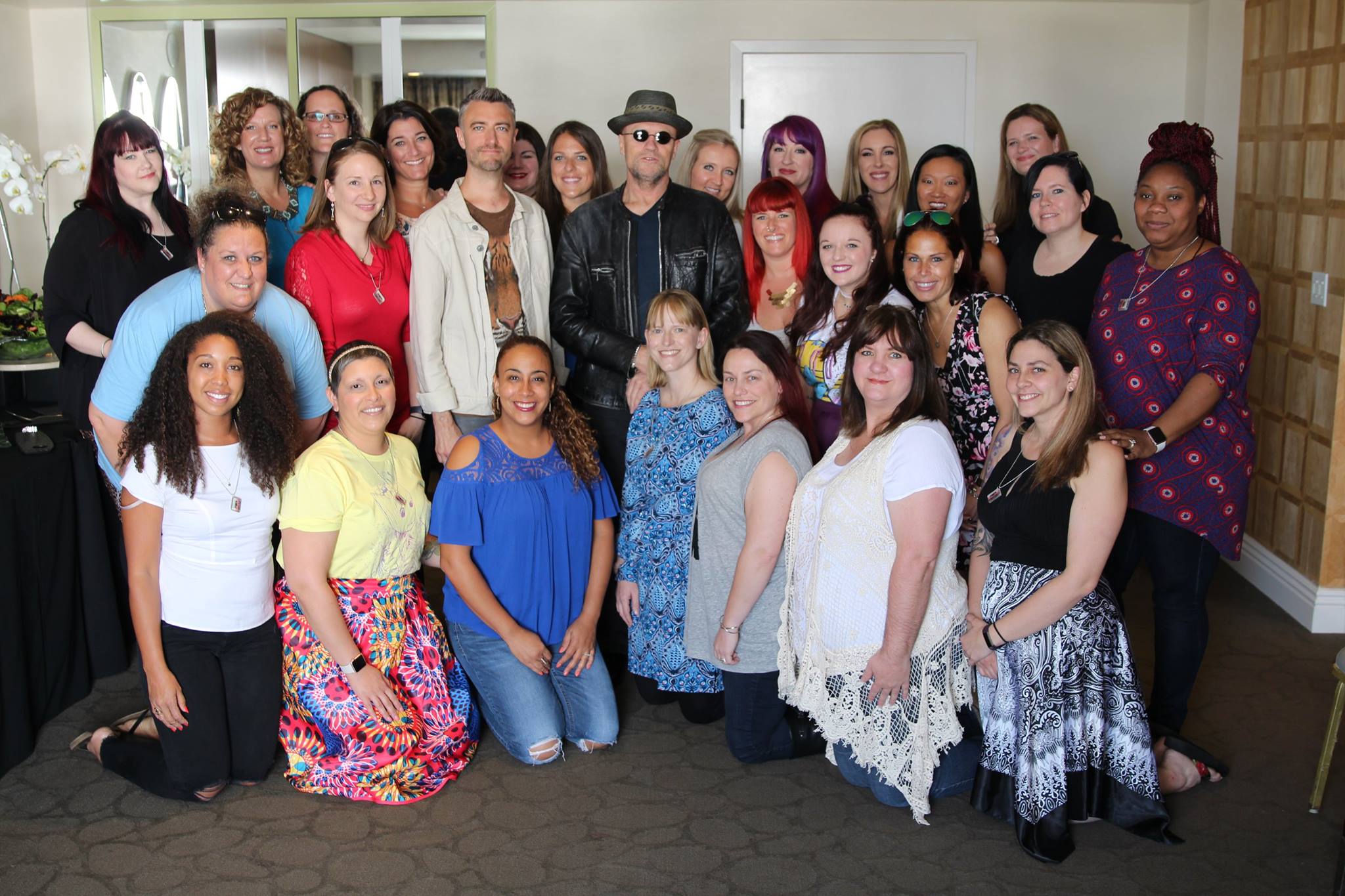 Michael Rooker on the set of GOTG Vol 2

Guardians of the Galaxy Vol 2 in theaters now!