It was easy to see that the time spent on the set of Mystery Girls was a lot of fun.  Meeting Tori Spelling and Jennie Garth was a real treat, but actually exploring the set, seeing the wardrobe and talking with the director was a great experience.  While on the set we also had an opportunity to sit down and talk with actor Migel Pinzon.  The 3rd Mystery Girl as the ladies like to call him.

The day we were on the set, Miguel got the news that he was nominated for a Kids Choice Award for Male Breakout Star.  He shared with us his excitement by doing a little happy dance and then talked about what it is like to hang with the ladies, and who is the one person he would love to work with most!

He walks all bubbly and excited to chat with us.  One of the bloggers notices a pin on his shirt and says, “Tell us about your pin.”

Ha!  And what does that say about you?

Miguel:  It says that I working on self-esteem issues.  And if you can’t love yourself how the hell can you love somebody else?  Can I get an amen?

How much are you like your character on Mystery Girls?

Miguel:  I think Nick is slightly more psychotic than I am.

How is it working with that hunky detective we saw earlier on the set while shooting.

Miguel:  Ryan McPartlin is an absolute sweetheart, so professional.  At the same time I get to be paid to feel him up occasionally.  You know, to be paid and play is fantastic.  And he also did this show with Fran Drescher and he’s got great Fran Drescher stories.  I mean I’m in heaven.

Congratulations on your nomination.

Miguel:  Oh, thank you so much.

Did you have a thank you speech already prepared?

Miguel:  No, but I am very excited because like you know when you play that fantasy in your head about like things you want to accomplish.  Like one of mine is like an EGOT.  So it’s like if I can’t win a Tony at least I can win a teen choice award maybe?  And then I was like playing a game like what if I can like replace a teen choice award, an Espy, and Obie, like anyway it’s fantastic.  I haven’t prepared– it just happened this morning but I was just thinking how fun it is to be nominated for a character that’s queer and fun and vibrant.  And I think that’s great that teens are getting to see every shade of human being and celebrate them.  Yeah.  So I’m super, super happy about it. 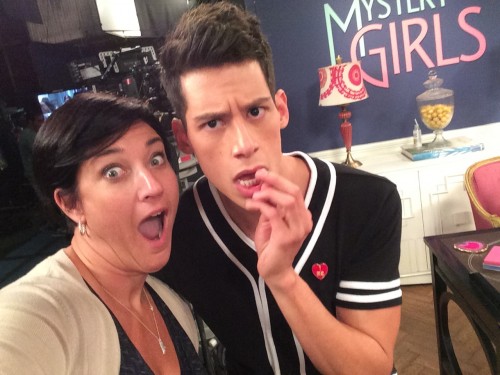 So how did you get involved in the show?

Miguel:  I was in San Francisco doing a job, not an acting job.  Those jobs you sort of take to like make the acting jobs work  – and my agent sent me the info like can you please put yourself on tape and I was like oh, man like I really can’t.  Like I’m doing 10 million things at once.  I think like this is just one that I’m going to like let go.  And he’s like please, please, please just do it.  And I was like okay.  And I scrambled and put it on tape and let it go as one usually does.  And then like about two weeks later got a call like the producers want to see you.  Oh my god you’re kidding.  And then I kept presuming it would sort of stopped there.  Like oh, cool.  And then it just sort of happened, which was amazing.  And then I’m a big fan of like sort of like fortuitous circumstances and like that everything is a guidepost if you’re looking for them.  Did you happen to see the pilot?

So, my character Nick is new to LA and the first thing he does is he gets on like the Hollywood tour bus and he stops to take a picture of Katy Perry’s mailbox and like witnesses a murder and that’s what like directly puts them in like the girls line.  And when I found out that I got the job I was at my partner’s house and they called to tell me I had the job.  And then a Hollywood tour bus went by like literally.  And he stopped the bus and he was like come here.  Come here.  Come here.  And I was like no no no what are you doing.  I thought he was going to be just like me — do something embarrassing.  But then after I hung up he pointed out like you have no idea like how cosmic this all is.  He’s like that happens in your script and he liked you know whose house that is right there?  And above his house is Katy Perry’s house and I was like wait, you’re kidding me?  Just one of those really fantastically parallel moments.

So this is your first job?

Miguel:  This is my first big rodeo.  I came from New York and had been in LA for a period of time and did a little thing on Law and Order. And then did a little bit on 30 Rock.  But this is like my first series regular thing and my first time I get to do three camera comedy like just a dream.  It’s so awesome.

Where are you from?

I was birthed in South Florida.  Fort Lauderdale.  In the parking lot of the General Hospital in the front seat of a Toyota Camry on Thanksgiving day.  That’s the story of like my mom telling me all the time.  I just love seeing her talent.

How is the family about you being on the show?

Miguel:  My family has been so, so supportive and so celebratory and texting me about like oh my God I love this line.  I think that’s so funny.  My eldest sister who was an actress and no longer is but she loves to give notes, has been surprisingly so supportive and not giving me a single note, which is what it is.  But everyone around me has been so nice and supportive.  It’s been awesome.

Have you always wanted to act?

Yes.  I recently discovered just like this little autobiography I did like him, what was it, second grade?  And it was like tell us about what your future wants to be.  And I was like I want to be an actor and then I listed all the people I wanted to work with.  I’m like what an absurd list.  I want to be in the movies with, my first-person was Whoopi Goldberg, which I was like when was I in a big Whoopi?  But I love Whoopi.  She’s an EGOT winner by the way.  And then towards the end I trail off and I’m like and if that doesn’t happen I’d love to be a veterinarian.

What’s it like working with Tori and Jennie, long time friends with a long history of working together from their 90210 days?

Miguel:  It’s amazing to see their shorthand.  There’s this ongoing joke that they have in the script of the characters which is like are you thinking what I’m thinking?  And then usually Tori’s character will say something completely off the mark and that’s always where the joke is.  But they actually often are thinking what the other one is thinking.  I just sort of love seeing how collaborative they are and the fact that they’re not only acting on it but are executive producers on it.  And just seeing that relationship, that balance is inspiring because you got to make your own work.  No one’s giving it to you. Something I keep trying to learn.  And then at the same time on tape night the residual 90210 fan base is incredible.  They are always here, so supportive and they like — their jaws hit the floor when it’s like oh my God it’s Donna and Kelly.  So it’s, it’s so cool to see like — to see them and see them through their eyes, you know what I mean.

You have a favorite scene or episode?

Miguel:  I really love the pilot, when the first time meeting the two girls, like any time someone gives you the allowance to like into the room like a hurricane and chew up scenery I’m a fan of.  And that scene is so fun because it’s like me that initial explosion of like meeting your idols and like the goose bumps that you get from it.  Yeah I think that was one of my favorite scenes.

What is your favorite thing about your character?

Miguel:  His authenticity, his lack of filter, his I think reaction to living in a world where no one’s telling him that he’s any different so he’s just who he is and there’s no apologies.  They’re sort of reflection on like oh, I should really been.  He’s a thing has come from like a place of being celebrated and like just supportive.  So I think just being able to be completely 100% authentic him is I think one of my favorite things about him.

If you could be in any action film what would it be?

If I could be in an action movie?  Well if I could turn back time I would want, which by the way I just saw Cher in concert and it’s life-changing.  If you weren’t there go on my instagram and like I was like broadcasting the entire thing.  11 looks, 11 wigs, that’s crazy.  The woman is 68.  If I could turn back time I would want to be in this weird film with Meryl Streep called River Wild, where it’s like her only sort of action film.  So I would love to be in that.  And then I was always — I still am the big X-Men fan.  I mean, A, such a good story, such a good metaphor for like different, how people treat differences.  And they’re awesome.  Does anyone know Bryan Singer?

Who’s that one person you want to work with?

Carol Burnett.  100% Carol Burnett.  She is money.  I on lonely nights will watch the Carol Burnett show.  She is connected to something else.  I have no idea what that is, timing, instinct.  She just– the ability to land a joke and change a joke and keep everyone guessing.  She’s amazing.

Be sure to tune in to Mystery Girls at 8:30pm ET/PT on ABC Family!

*I was invited by ABCFamily on a press trip to visit the set and interview the cast of Mystery Girls.  All photos not credited are my own.  All opinions as always are mine.  Some editing has been done to the interviews to make it easier to read.