If you are around my age (40), it’s next to impossible to not have ever heard of the 90’s hit TV show Beverly Hills 90210.  So getting the news that I would be on the set of Mystery Girls with THE Donna Martin and Kelly Taylor, known in real life as Tori Spelling and Jennie Garth, I couldn’t help but get a little excited.  I mean, they were 2 of the girls that I watched for years and had numerous conversations with my girlfriends about their 90210 story lines.  This made finding out what this Mystery Girls was all about.  On the list of things to do, tour the set and interview not only Tori and Jennie, but also the hilariously talented Miguel Pinzon.

I have been to a few different set visits with ABC this year.  Each and every one of the them have been very different.  This is the first time that we actually watched scenes being shot for their season finale.  Watching the cast in action was so fun, but that was just the beginning of our time at the Mystery Girls set, for once they took a break for lunch, Tori and Jennie sat down with us to answer our questions as to why this and why now.

On the Set of Mystery Girls

Watching them approach our group dressed in the same clothes they were shooting in earlier, with perfect make-up and hair, it was almost like a weird dream to be sitting with these women.  Maintaining a job in an industry that has never claimed to be easy for over 20 years, sitting down to chat with them was definitely a treat.  One of the bloggers complimented Tori on her poodle skirt, noticing the poodle pattern.  Tori loved that she noticed.  Then letting everyone one know, “H & M”. 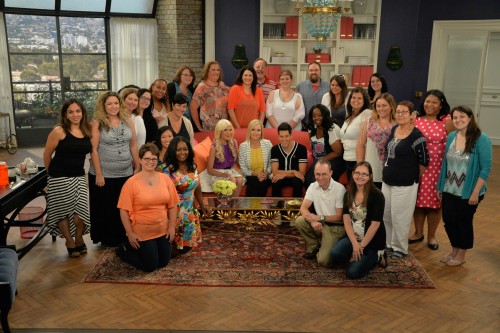 How did you come up with the idea for the Mystery Girls?

Tori:  I had done a Christmas movie for ABC Family and I knew they were looking for comedies and I used to be a huge fan of mysteries in the eighties and my dad’s shows and I loved Remington Steele and I just wanted to pair that with comedy.  And that’s where it came from.

So was it automatic for Jennie to play the other part?

Tori:  I was hoping?  But yeah, I was praying that she would wanna do it.  And when I thought of the idea, I was like no one else could do this.  But, I didn’t know at the time what she was doing, what her plans were so I was just, I emailed her and…

Jennie:  You emailed me a very sweet letter.  No pressure but, I just read it.

Tori:  You know when friends ask you to do favors like, “Hey, I have this thing for you,” you always feel so like guilty asking?  So it was one of those.  But, I felt like we had a pretty good script to back it up you know.

Jennie:  Yep, made me laugh.

Jennie:  We have so much fun and it’s just really easy.  You know we know each other very well so there’s, we’re past all the, the awkward getting to know each other and we kind of know each other’s ups and downs.  when we need space, or you know need comforting, we’re very familiar with each other already.  And we already have that built in chemistry too as actresses.

Tori:  Which we did drama for years.  I mean kind of.  We always had our like funny moments together?

Tori:  Yeah. (laughing)  But it wasn’t a no brainer that we could do comedy together, but then when we tried it, we just fit right together and it was perfect.  And of course, you know, anyone can do a female buddy comedy, but I feel like the chemistry, like the bond we have, over twenty years of a friendship, like you can’t replace that.  I don’t feel like anyone else could really have that back story.

Is there any relation to your characters and yourselves in real life?

Tori:  Obviously we’re different than our characters.  But I think there is a part of both of us in our characters.  Like the relationship we have in real life.  Especially, like I feel like I’m in real life very trusting of everyone.  And I go into everything kind of full force and I don’t really take into consideration what’s going on.  And in our friendship, Jen always kinda steps in and protects me over the years.  And I feel like that’s what Charlie and Holly are like too.

Jennie:  Yeah.  I always have been more of protector, a big sister to her.  Since the very beginning.  I’ve always been a little tougher you know?  Uh, physically?  (Laughing)  You know I can, I can take care of myself.

Are there any plans on having any more cameos from your former 90210 cast mates?

Tori:  We would like that.  We think so.  I think the first season we’re establishing the show and the reunion of us from 90210 and, if should we go a second season, which we hope we do, I think we would want to have a cameo or two from our 90210 group of stars.

Who do you think you’d ask?

And in the episode airing July 23rd you have Nat from the 90210 Peach Pit in it?

Tori:  Yes.  Next week’s episode is High School Mystery and kind of is a wink-wink at (90210) where Donna Martin graduates and we go undercover back at my old high school, which is West Beverly.  Nat from the Peach Pit, Joey, plays the high school principal.  So that was really fun to do.

Both moms in real life, I really wanted to know if  any of their children are interested in acting?  And if so not yet but are later, what kind of advice do they have?

Jennie:  (Turning to Tori) Are yours?

Jennie:  All three of my girls are intrigued by it.  I have a seventeen year old and I don’t know.  I support her passion for anything, but I’m not crazy about the concept of it.  She’s seventeen.  Like I’m holding her off as long as possible.

I’m surprised!  You’ve been in the industry a long time.

Jennie:  I’ve seen it.  I’ve seen what happens and it doesn’t matter how great you start out, there’s a lot of things that can happen, a lot of things that can lead you in the wrong direction.  And I have three kids, I can’t always be with her, you know?  Who would want their mom out over their shoulder constantly?  You know what I mean?  So it’s just a very tricky position to put a kid in.

How’s it working with Miguel?

Jennie:  He’s a lot of fun.  He’s our third mystery girl.  He completes us.

Tori:  I mean it has to be hard to come into this, because we’ve known each other for so long.  We had just met him, but it wasn’t like that at all.  It was as if we’d known him for twenty years.  Like we had this friendship that’s just instantaneous and…

Jennie:  He didn’t let it be an issue.  He was just like, “I’m coming in.” It’s very similar to the relationship on the show.

After chatting with the girls, we had a chance to sit down with Miguel.  That interview is to come.  But take a look at some of the fun I had on the set!  He hung out with us for some fun photos and we even got to spend time in Mystery Girls dressing room! 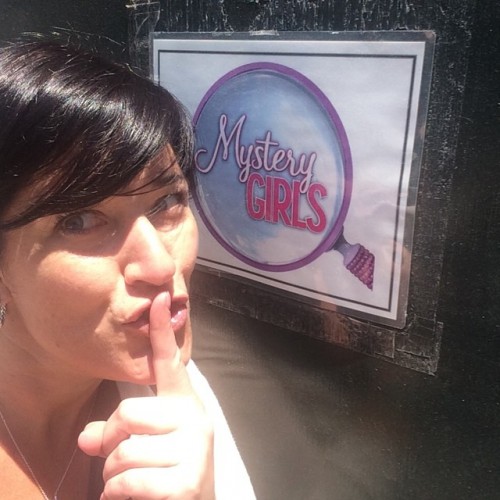 Heading onto the set of Mystery Girls! 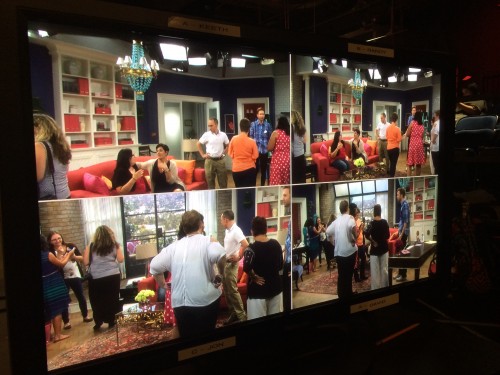 Yup!  That is me on the couch! 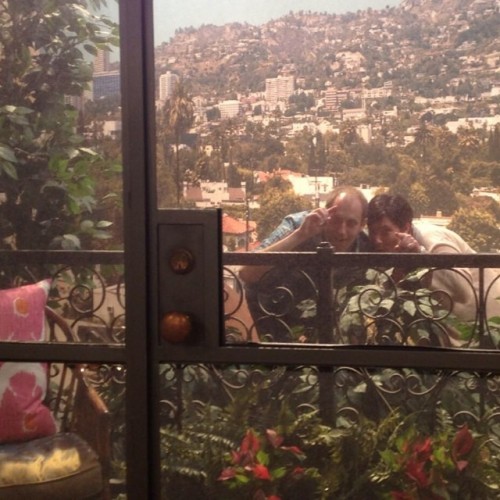 I spy two wanna be Mystery Girls!  Having so much fun on the set! 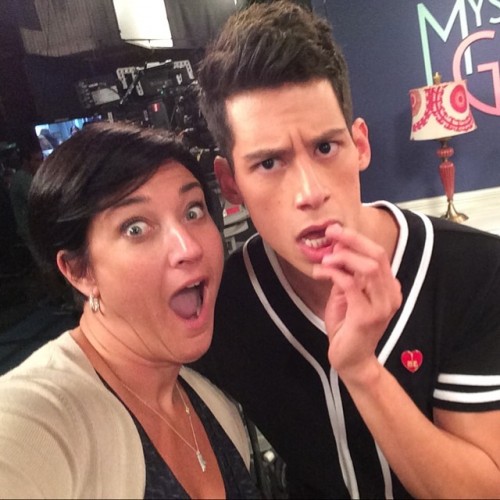 Miguel Pinzon took the time to take selfies with everyone! 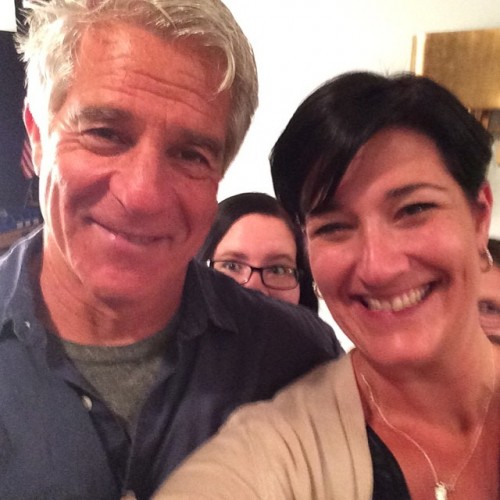 You may not recognize his face, but this is Director Michael Lembeck – he’s worked tons of shows, including Friends and of course now, Mystery Girls. 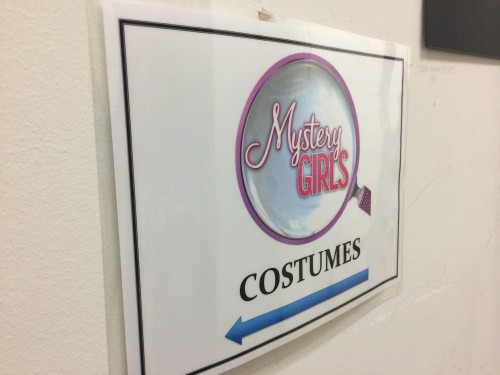 This is the way to many girls’ dreams!  The Mystery Girls dressing room! 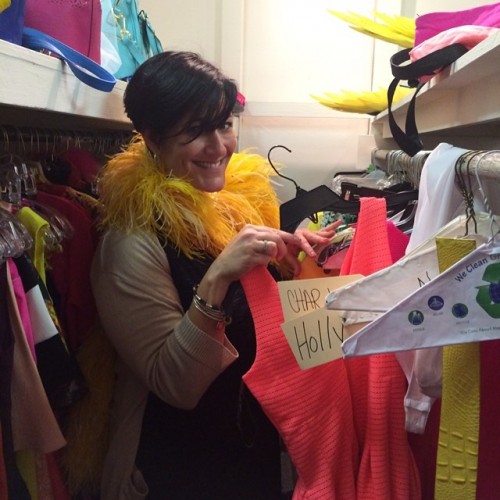 I can’t imagine the work that goes into buying wardrobe for the actors on the set, but it sure has to be fun!

A little about tonight’s episode!

In “High School Mystery,” Holly’s high-school principal Mr. Frost (Joe E. Tata) hires the Mystery Girls to make sure he does not become the target of the senior prank before he retires.  When the detectives go undercover at West Beverly in order to stop the culprit, Holly realizes this job is her chance to have the normal high school experience she never had but always wanted.  Desperate to fit in, Holly becomes obsessed with being popular and momentarily forgets about their case, while Charlie takes her role as gym teacher a little too seriously.  Once the mystery is solved, Holly asks Mr. Frost for her long-awaited diploma, prompting the student body to start chanting “Holly Hamilton Graduates.”

Be sure to tune in to Mystery Girls at 8:30pm ET/PT on ABC Family!

*I was invited by ABCFamily on a press trip to visit the set and interview the cast of Mystery Girls.  All photos not credited are my own.  All opinions as always are mine.  Some editing has been done to the interviews to make it easier to read.