Having two teenage girls, it was easy to sit down and watch ABC Family’s hit show Young and Hungry.  They have been fans of the star of the show, Emily Osment (“Gabi Diamond”), and now have quickly begun to love all the characters of this new show.  I was lucky to sit down with several of the stars of the show, including Aimee Carrero (“Sofia Rodriguez”), Rex Lee (“Elliot Park”), Jonathan Sadowski (“Josh Kaminski”) & Executive Producer David Holden.  We talked not only about Young and Hungry, but I also learned a little bit more about each of the people behind their very funny characters.

In comes four of the actors and the Executive Producer ready to sit down in the hotel restaurant and chat.  The room is set up with 5 tables so we all get a little more intimate conversation time with each of them.

First question was a good one.  The person asking is a gay man, and he talked about how when growing up he really never had normal gay actors to relate to.  So he asked what was the importance of creating the character Elliot for the show?

David:  I’d watch sitcoms never really felt part of or a world that I didn’t feel a part of.  When I watched the old shows there were hints of being gay, but not a character that was gay.  But in this day and age not only do we have a gay character, but we have an Asian character, we have a black character, we have a Latino character.  In my world where I grew up, there was every race.  It’s important to me that everyone sees a part of themselves in the characters.

I think you hit that perfectly.

David:  Well thank you.  The notion is that everyone is quite a mess on their own.  This is a girl that is messy.  That’s another thing, girls have always been supporting characters.  And I have always thought of that as total bullsh*t.  All my best friends in college and growing up were women.  The biggest people I looked up to were also women.  So it always made sense to me because I thought they were always the funniest people I met.  I think women are funnier then men.  I’ll tell you exactly why.  They, in general, have given birth to a child and if you can still put a smile on your face after that.  I mean they go through pain and then find the fun in life.  That’s what makes this show enjoyable.  And kinda that breath of fresh air.  You can have a complicated life and things can work out while having a good time. 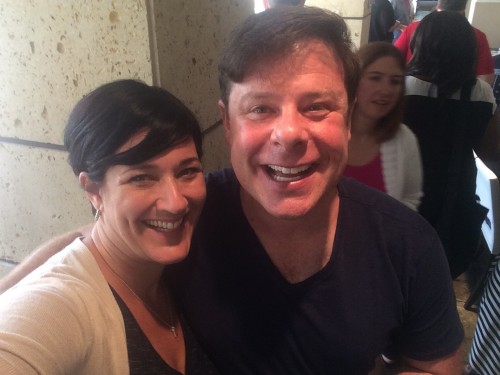 What were you hoping to give your audience from this show?

David:  At the end of the day, I just want families to be able to sit down and watch something together.  With some adult humor, but still ok to watch with your family.

Emily sat down next.

I asked about the fans that have followed her over from her Hannah Montana days to now this, my girls included.

Emily:  It’s great, I hope they all watch the show.  It’s fun to see, and it may be a little more raunchy than they’d expect.  But it’s fun to see.

How much of yourself to you put into your character on the show?

Emily:  As much as I can.  It’s easy to find myself in her, we seem to have a same sort of situations in life.

Emily:  The fact she isn’t afraid to make a fool of herself.

Not really knowing very much about Aimee I was curious as to how she started in the business and if she weren’t an actress what would she be?

Aimee:  I wanted to learn what it was like to be other people.  I love playing people.  I studied international relations in college and thought I would go to law school.  And when I had some doubts, I thought, “what else can I do to save the world?”  And then I decided to be an actress and moved to LA.  I feel an artist can reach different parts of the world that even maybe a politician can’t.  They let the artists in, so I feel there’s a lot of merit to that. 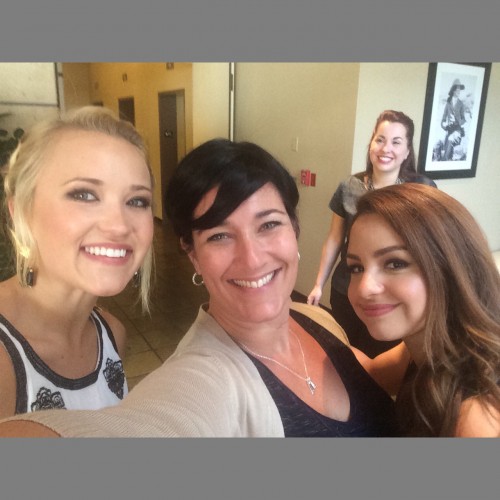 And I love the job.  Some people hate what comes with the job.  I don’t understand that?  Then why are you here?  They are asking when they get to go home.  I am thinking, “do you have something better to do?  This is a pretty great job!”  I love actors that love acting.  That is why I love these guys I am working with.  They all love what they do.

I didn’t do acting until I decided not to go to law school.  My first job was actually my first audition Alvin and the Chipmunks: The Squeakquel.  So yeah, that was my first job, and also on Hannah Montana with Emily.  Even though we didn’t have any scene together.

So are there any guest appearances coming up?

Aimee:  Well, yes, Jesse Macarthy will be on!  Which is also my favorite episode.  We have had some great guest stars.  This is ABC Family’s best comedy right now.  It feels great to be part of something so great right now.  Anything that keeps me out of working in a restaurant is great, but to work on something that I am proud of feels really great.

And check it out!  Jesse McCartney will be guest starring on this Wednesday’s (7/30) episode

For part two, including interviews with both Rex and Jonathan, come back next week.

*I was invited by ABCFamily on a press trip to interview the cast of Young & Hungry.  All photos not credited are my own.  All opinions as always are mine.  Some editing has been done to the interviews to make it easier to read.