John Stamos. Yes, this post is about being on the set with the cast of Grandfathered, but still, let me say it again, John Stamos. Whether you are 42 like me, 15 and 17 like my daughters, or 68 like my mom, John Stamos is one of those ageless heartthrobs that breaks the barrier of all generations.

When we arrived to the soundstage where FOX films Grandfathered, we walked right into the soundstage where we see a row of the cast chairs that I took a quick photo of before getting into the area we would be doing interviews. As I was taking the photo of the chairs, John happened to walk out, gave my back a quick rub and said “hello, how’s it going?” I kinda froze for a second for it was unexpected, but of course very welcomed. 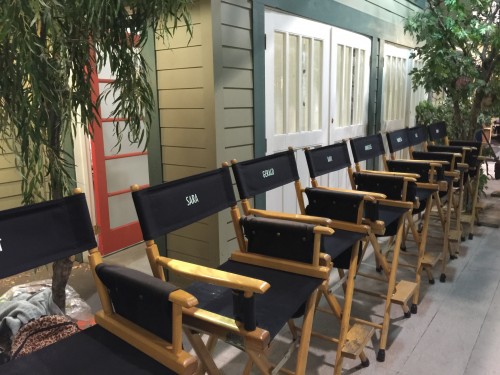 On the Set with the Cast of Grandfathered

OK, so this post isn’t all about John Stamos. The group of bloggers and I were fortunate enough to also sit down with Josh Peck, Christina Milian, Paget Brewster, Ravi Patel, and Kelly Jenrette. The set up was 3 tables that the talent rotated in the bar and restaurant area of the set. I have some of my interview that I am going to share here, but unfortunately my audio was bad, so I am using some of the parts of the interview that was transcribed when the cast sat with the other groups. So, some of this is first hand, some is from the transcript, but all of it is with my excitement as I share the fun of visiting the set of Grandfathered.

Funny, charming, full of energy and well, looking extremely handsome, John and his beautiful co-star Paget joined our group. John came to the table asking us how we were doing, thanking us for coming and then asking about our blogs. He was really interested about what we do, and it was nice that he seemed to care, but this isn’t about us, so I turned the tables back on him and asked him how and why he got involved with Grandfathered.

“I wanted to do something, and I love being on TV, and I was doing other things like guest starring on other shows. So I got together with my agent and he said, ‘do what you do best’ and the next day I had a meeting with show creator Danny Chung and he told me about a story he had in mind that I would be a playboy kind of a guy and then I find out that I have a son. Then they mentioned a baby, and I thought, ‘that could be interesting’, and then we thought of who could play that baby momma, and how we need a strong woman to play a woman in her 40’s that is single and not afraid to play a grandma. And how that would be a good story for me for I would be a guy that would have to overcome his bullsh!t to overcome that looking for that young girl because what I am looking for is right in front of my face. She’s beautiful and smart, and we have a lot of common. And that was a dynamic I wanted to put on TV.”

Paget was quick to thank him, almost blushing! He continued that he loves family shows, and it working out well for us. As the years that go by divorce rates go up and he feels that Full House had such longevity and that Grandfathered is similar as to it’s a goofy unconventional family. “I mean, I have to be a dad and a grandfather, and be emotional, and learn what it’s like to be in an adult relationship.”

Paget chimed in that she didn’t have a problem playing a grandmother at her age. It’s not often in Hollywood that actresses embrace those roles mentioning that it is a sexist industry and if you play that part you are pretty much typecast as that role forever. “I haven’t found that. I played a mother on Huff, I played a FBI agent. It just has to be well written.”

At 52, John was sweet in sharing his secrets on being ageless, “I don’t have a good answer. I eat healthy, work out, no stress and I meditate. It’s important to be calm and rejuvenate. I pray everyday.”

Casting on this show is brilliant. With the wide range of fanbase from Josh and Christina, and John having fans as young as 5 to as old as 100, how much better could it be? John’s response is “hashtag grateful”.

How is the chemistry on the set? It seems to be pretty amazing!

Josh: It’s magical! I think we’re just so incredibly lucky to, to have brought this group of people together and that we all like each other so much and there’s sort of this mutual respect and we’ve all gotten to see each other’s characters really grow.

Ravi and Kelly talked about the chemistry as well telling us how much fun it is to work together. They say they get a long like a brother and sister and they love to mess around with each other.

Ravi: I think the writing is so good. I think the more we settle into our characters, ad I’m speaking on my behalf, but it’s taken me a while to kinda settle in to understand my guy, and really on the consistency in how I perform as him. I see the tone of the show as settling in more as I see more episodes. And there’s just this chemistry just seems to be improving. It’s cool to see. I hope we’re around (a while) ‘cause I feel like every episode is so much better.

Ravi has created a snack bar “This Bar Saves Lives”, a company that raises money for children sufferning from acute malnutrition with a gluten-free and non-GMO snack bars for sale at Whole Foods Market, Target and other top retailers. For every bar sold, they donate a lifesaving meal packet to a child in need. He was very passionate about this product and it was exciting to hear about it.

Every year, severe acute malnutrition claims the lives of 2.6 million children. That’s one child every 12 seconds. But here’s the thing…it’s preventable. Children suffering from severe acute malnutrition have a low weight-for-height ratio and suffer from wasting (extreme thinness) or edema (swelling)—often resulting from illness and a lack of nutritious foods in their diet. It is a preventable, yet serious, life-threatening condition currently afflicting 20 million children worldwide, and right now less than 10% of children are receiving the life-saving treatments they need. But that’s all about to change. Find out more at http://www.thisbarsaveslives.com/

So after all the interviews we took this group shot. 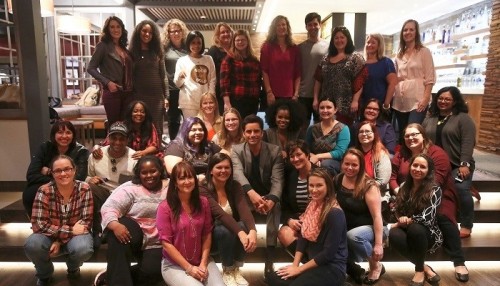 While sitting there I shared with him a text that my 17 year old sent me. 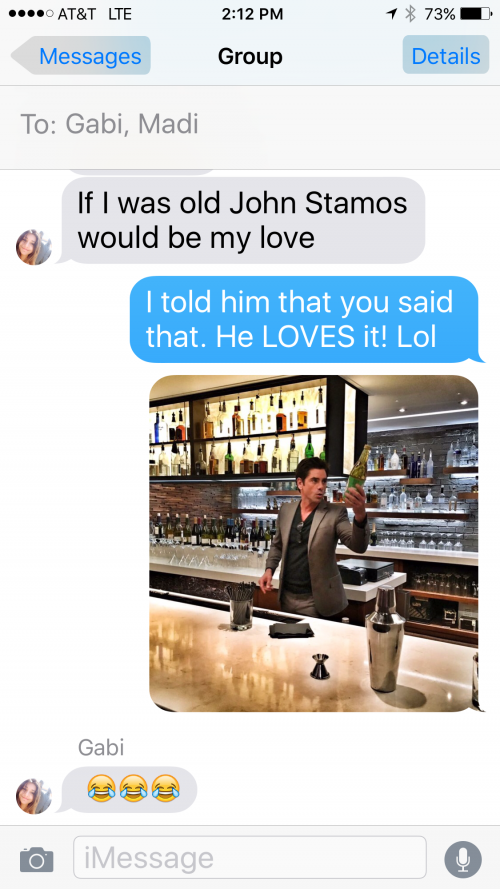 He also did ask her age and when I said 17 he said…’oh yeah, that’s young” and winked. Did I mention how handsome he is?

Here are some of the photos I snapped while walking around the set of Grandfathered.

Here’s a look at tonight’s episode!

Guest Starring Dr. Phil McGraw (“The Dr. Phil Show”)
After hearing that Jimmy hasn’t been to the doctor in over ten years, Sara and Gerald trick him into seeing their family doctor (Dr. Phil McGraw) for a routine physical, which results in an unsettling discovery. Meanwhile, Gerald and Vanessa stress over Edie’s upcoming surgery and Annelise and Ravi stumble upon Jimmy’s secret safe in the all-new “Perfect Physical Specimen” episode of GRANDFATHERED airing Tuesday, January 5 (8:30-9:00 PM ET/PT) on FOX.

*I was invited by ABC (yes even though it airs on FOX) to the set of the show Grandfathered to share my experience with my readers. All opinions as always are my own.