Having the chance to talk with the movie makers of Planes: Fire and Rescue when the movie was being released earlier this year was a treat, but to have a chance to chat again with the release of the Blu-ray and DVD gave me a second go around with co-writer Jeff Howard and Paul Gerard, Director of Creative Development.  These two obviously love what they do and are quite fond of each other too.  It seems they never get tired of sharing the process of what goes into the research side of making this movie. 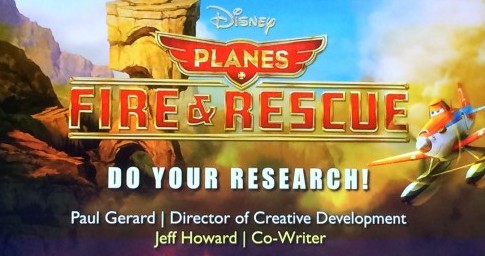 Here’s a little of our chat.

JEFF:    So you guys went out to LA County this morning?  Yes?  We went out there and we had lunch at 94th air squadron.  I think that might have been where we had our first lunch when we were brainstorming.

JEFF:    Like, “Let’s go out there and just sit and look at the airplanes and talk about what we want to make,” for the first Planes movie.

PAUL:    This is a Truth in Materials.

JEFF:    Do your research.  It has an exclamation point.  It’s a command, so this is a mandatory thing.

PAUL:    John Lassiter, our executive producer, believes in this idea, Truth in Materials, which  you know. We can find not only character, but story, but the grounding of our movie in our research. We have a huge conceit going on, which is that airplanes talk and have eyeballs, so everything else around that should be as grounded in reality as possible.

JEFF:    Right. So we went out and talked to dozens of aerial firefighters and ground crew and smoke jumpers and air traffic controllers, and visited several national parks to try to get all of the details of the movie right.

When you’re doing a movie like this, do you have a story before you go out and research or does the story develop from the research?

PAUL: Sort of a little bit of both, yeah.

JEFF: Little bit of both. There’s — it’s more of the latter. Basically, the — the impetus for it was, okay, you know we started it when the first Planes movie was only a year into development and production, so it was still going to be three years before Planes came out, but we thought it was coming together pretty well, and we said, “Let’s do — let’s start working on a follow-up, ’cause we think this is gonna be pretty successful,” and Bobs started looking into the different arenas of aviation. What could we do? We could do this sort of a story, this sort of story, different things, and he started looking into aerial firefighting which is something that hasn’t been shown a lot in movies, and when he first started investigating it, the very — you know, this is where the research sort of led us into what the story was gonna be, because he discovered that the first aerial firefighters were crop-dusting aircraft, and that the type of planes that Dusty is modeled after are also used for firefighting. They put pontoons on them. They let them scoop off the water. Exactly what happens to Dusty in the movie. And we said, well, this is a natural extension for what Dusty’s next adventure is gonna be. It was a great “in.”

Of like, well, somehow, he has to go do that, and he gets modified to it like these aircraft actually are. Um, and then we went out and started talking to the people who actually do it, and we would get little tidbits of — of things, and the idea of like, second chances. You know. You do go through a few iterations of the story. Like, the first version of the story was not about second chances, necessarily, when we went into it. And then, once we started learning more from the research, we said, “You know, what’s really interesting about this world, is this, that all of these aircraft used to do something else, and what if you had a story — ” You know.

Bobs came in one day, and said, “What if Dusty can’t race anymore. It’s not a choice. What if he’s — it’s like an injured athlete story. You know. You’re at the top of your game, the top of your sport, you break your leg. What are you gonna do with your life? You know?” And so we started thinking of it in those terms, but it was sort of born out of seeing that these other aircraft had second chances as well. So, they sort of both feed each other. Sometimes you will go in with a story idea by the things you discover. Sometimes you go into this story idea and you realize, “Oh, no, it’s actually this,” which would be much cooler of a story to tell, and you shift over to that.

PAUL: At least a year.

None of the animation is done until you have the story done?

JEFF: Once you have the story together, in terms of like, a script or, you know, a treatment of a script, then you start doing the storyboards, which is just the black-and-white drawings, and you edit it together into an animatic or a story reel where you can watch the whole thing with a temporary voice and sound FX and music and everything to see if it works, and you go through that, four, five, or six or even more times, and at the same time, you know, the guys are doing designs. And building things in CG. And then only when that is nailed down, then you go ahead and say, “Okay. Now we’re gonna really start animating it,” and that part, just the animating takes a year or more by itself.

And even then, there are things that you will change down the road, like the thing about the smoke jumpers looking before they jump out. That was late in the process.

PAUL: That was late in the process, with the jump —

JEFF: So, we were like, even though we’re in animation, it’s like, all right, we need to go and put that sequence in, and sometimes we’ll change lines, you know, up till even a month before it’s done, you know we’re tweaking stuff, with, you know, Travis, or Chuck, would come in and say, “You know what? It’d be better if they said it this way or you showed this, or maybe you need a shot actually clarifying to say this.” We would add stuff later on, but it takes a long —

PAUL: Yeah. Takes a long time. I mean, people are already shocked — that, like, it takes three years to –

JEFF: Yeah. Some people were like, “Wow, you churn that out in a year after — ?” Well, no, [OVERLAP] we started it three years before the other one came out. This is — both of them took, you know, a really long — it’s just very labor intensive.

So, you said that you’d started working on the second film three years before it’d come out. So, are you planning another one?

PAUL: I cannot confirm or deny that.

JEFF: Confirm nor deny. Cannot confirm nor deny anything that we’re working on. Just don’t walk around the building too much…um, you know, we’re always thinking of stuff. It’s, if people want to see it, and we have a good idea, then it’s totally a possibility, so, um, but, we’re not allowed to say. Stephanie has a gun, and she’ll shoot us –

The accuracy is pretty amazing!  I mean, kids are learning so much from this movie!

JEFF: Yeah. Well, that was part of the intent. And we’ve talked to different — you know, we had this one screenwriting consultant come in who talked about how people in movies loved to see process. You love to see —

JEFF: — to get insight into a world that you know nothing about. Whether it’s, oh, this is how chefs operate. This is how fighter pilots do it. This is what it’s like in the boiler room of a brokerage firm. You know.

PAUL: This is what the bottom of the ocean looks like.

JEFF: Yeah. People are interested in seeing that. There’s — there’s fun in being able to learn those kinda things, so, you know we didn’t set out to make an educational movie.

But the details that we would learn, that we’d think were cool, we’re like, “Oh, let’s put that in, just ’cause we think that’s interesting and fun and we’re all animation — we’re all aviation geeks to begin with, so…”

PAUL: You don’t have to make stuff up if the world is fascinating. It makes your job a lot easier if the world is really interesting and you’re seeing a lot of really cool things, and, you know, I — I always liked the idea of immersive experiences, where you’d go and you explore a world that you’d never seen before. I think that that forces you to be original, and it forces you to actually be honest with your storytelling.

So you know, it’s fun when you get to go to the movies and get entertained, and learn something.

Disney’s Planes: Fire and Rescue is now available! Get yours today!

*I was invited by Disney to a press junket to cover the release of Planes: Fire and Rescue. All opinions are my own. Interview has been edited to make it easier to read.