Last week I shared with you the time I spent with the ladies and creator of ABC Family’s Young and Hungry, but I’ve gotta give some love to the men of the show.  Rex Lee (“Elliot Park”) and Jonathan Sadowski (“Josh Kaminski”) are hilarious and such important characters on the show.  They had plenty to share during our time together.

The Men of Young and Hungry

Rex Lee is not new to the screen.  He is best known for his role as Lloyd Lee on the HBO original series Entourage.  We talked a little about that, as well as bringing his character to Young and Hungry, and why it is so important to him.

Blogger Mitch of Gay Dad NYC started off the conversation.  The fact that there are gay characters on the show, and that they are just regular part of the cast.  Mitch told Rex, “Being gay and having a straight son, this means a lot to me, for growing up I didn’t have that.  Gays were always hidden characters.  So having them out in the open is important.”

I completely agree with you.  I am sorta in disbelief of the strides that have been made.  You know, it took me many years to become an overnight success.  When I started, what you are describing was more of what it was like.  Gay characters were more your stereotypical.  It was disappointing.  Needless to say, it’s not like that anymore and it’s very encouraging to say the least.

Tell me what it’s like to get handed a script that is so funny each week.

If I get the script and when it’s funny I am so happy.  I come from the school of acting that when the script is bad, you make it good.  That is NOT the case here.  David is such a good writer.  He’s amazing and the writing is so good.  I am at the point in my career that I am spoiled.  Being on two shows that I’m proud of, I am at the point that if you hand me a script and it’s not good I am inclined to say no.  David had me in mind for this role, so I didn’t have to audition.  And when I read the script, it was really funny and it had heart.  So I thought, this is something I want to be part of.

You and Kim have great chemistry.  What is like working with her?

It’s a really nice surprise.  I think in the early script, even though my character had interaction with her character, I thought the bulk of my cattiness would be directed at Emily’s character, but the Kim thing was a nice surprise.

Does that bantering with each other continue off screen too?

We are extremely different people, so when we aren’t working we don’t really go back and forth like that.  She’s a mom.  I have to share this story about Kim.  This is an amazing story.  Once upon a time Kim had this protege, or, well a flawed lady.  At some point Kim randomly got a phone call from a hospital and they said “we have your kid”.  And Kim is like, “WHAT?”  So this woman that was her protege had a kid and and told the hospital that Kim Whitley would be raising my kid.  So Kim got that phone call and said “OK, I’ll come get the kid.”  And now she’s a mom!  This was a few years ago.  I just can’t imagine getting a phone call and becoming a mom overnight.  Kim is amazing.  What a big heart she has to take that on.

What does your family think of your acting?

My dad is a doctor and my mom is an evangelist.  But neither are in show business.  My mom is proud of me.  English is not their first language, so for years they didn’t even know what I did.  The Korean girl that was on Lost was once photographed at an award show and I was walking behind her.  And that picture ended up in the Korean newspaper, and my mom saw it.  She called my sister and said, Rex is in the paper!  My sister is like, yes, that is him!  And my mom asked why, so my sister told her that I am in a TV show and people know who I am.  My parents just don’t watch TV, so they just didn’t know. 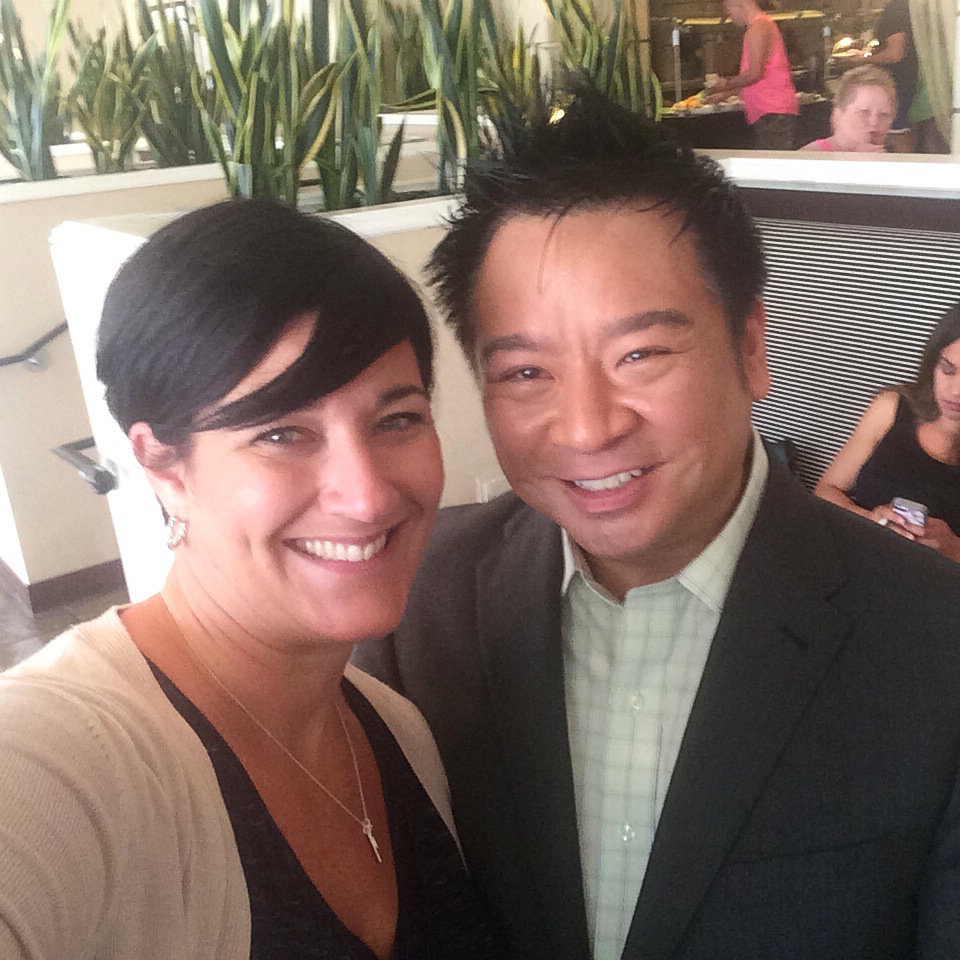 Then comes Jonathan.  On crutches, but he’s seriously as cute as ever.  Totally loving the attention of our group.

What did you do?

So I broke my ankle, snapped in half, going up my steps on my way to work.  So they had to shoot me from the knees up for the last episode that we shot, which isn’t the last show of the season.

So what is it like to do those shirtless scenes?

So you know what’s funny?  We shoot this scene where I am in a towel.  So we got it out of the way during a pre-shoot so I didn’t have to do it in front of a live audience.  So we are done for the day and I hadn’t really had anything to eat, so I am like having these ribs, brisket – a huge plate of food.  And then I am told that we are going to go ahead and shoot it again live.  I was like, “Are you kidding me????”  They are like, “we are soooo sorry.”  I mean I was gorged.

He was reassured that we couldn’t tell.

When you watch the show you can feel the energy of the cast, what’s that like?

It’s a very special project to be part of.  When you think what it takes to get a show on the air.  When it comes to writing the script.  Then writing the pilot.  Then cast for the pilot.  To get a perfect cast, there are so many variables.  So to get a cast that works…it’s just a miracle that everyone’s schedule worked.

Yes, a lot.  In rehearsals we try what works.  But certain situations you find funny things to say.

“Young & Hungry,” airing on Wednesday, August 13th at 8:00 p.m. ET/PT.
In the episode, “Young & Car-Less,” when Gabi’s beloved car breaks down again, Josh sees it as an opportunity for her to drive something safer, and takes it upon himself to replace the ancient vehicle.  But Gabi is devastated at his gesture and reveals her car was the last gift she ever received from her late mother, leaving Josh horrified and the whole gang determined to get Gabi’s car back.  Meanwhile, Yolanda and Elliot call Josh out on that fact that he treats Gabi differently than them.

*I was invited by ABCFamily on a press trip to interview the cast of Young & Hungry.  All photos not credited are my own.  All opinions as always are mine.  Some editing has been done to the interviews to make it easier to read.