Just over a month ago I spent some time with Tony Brent, the star and producer of Orlando’s number one dinner show.  Tony has made the Outta Control Dinner Show, located at WonderWorks on International Drive, home to his typically sold out weekly performances.  Tony was very kind in spending some time with me giving me a glimpse at the man behind the curtain. 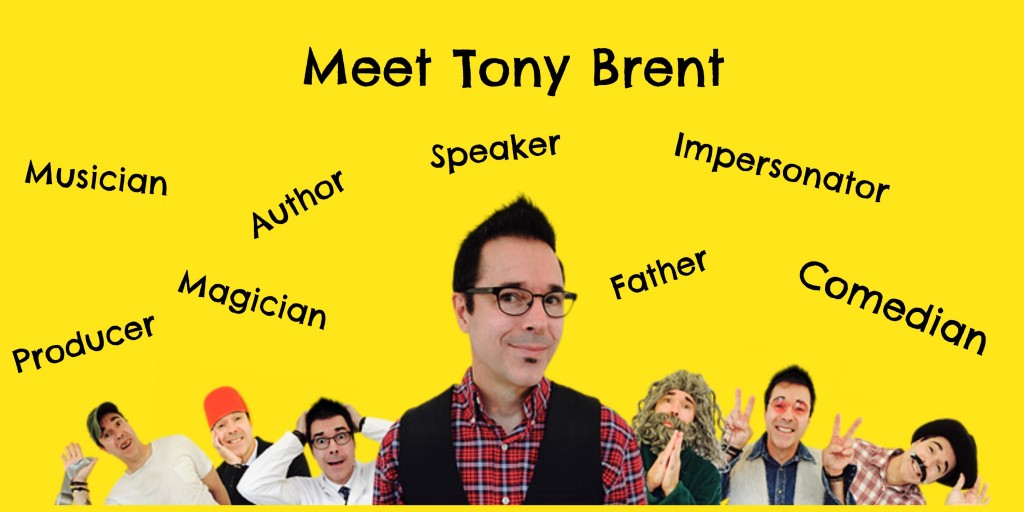 Tony grew up on a farm west of Memphis, Tennessee.  An only child, he spent a lot of time, teaching himself magic, learning voices and how to do impersonations, and probably creating some of the very characters that he brings to life in his shows today.  From the young ages of 8 until his later teens, Tony spent a lot of time of learning, loving and leaving magic.  He went on to the University of Tennessee where he studied acting, theater and improvisational comedy that gave him opportunities to work in the front and behind the scenes at a few Tennessee amusement parks like Opryland and Liberty Land.  All that talent eventually brought him to the land of The Mouse, and moved to Florida to work at Disney.  All of the twists and turns brought Tony to this time in his life.  Meeting me at a local Starbucks to chat over brew, he shared his love of the stage, passion against bullying and what’s next for him.

You know, the first time I saw your show was probably 10 years ago.  I have the DVD.  That’s impressive to have a successful dinner show in the Orlando area for so long!

Ya know, a few weeks ago a young lady that just graduated college came to the show.  She told me she was on my stage when she was 12.

I moved from Tennessee to Orlando to do the pre-show at Disney’s Fantasmic! with Danny Devaney”.   I did that for almost a year.  I actually broke my contract to do the dinner show.  A few months after, they asked me to come back.  I did a show at EPCOT.  I worked part time there and then did the dinner shows at night.  That lasted for about a year.  I only worked for 3 or 4 days a week at EPCOT but doing the dinner show 6 nights a week.  This year I went to 5 nights a week.

How did you end up getting into magic?

A guy came to my school and he did a “Say No to Drugs” program.  I must’ve been around 7.  I was enamored with it.  I went to the smallest school in Tennessee.  There were less than 100 kids in the school.  Only 6 kids in a class.  We had a tiny library, about as big as this – (looking around the small Starbucks we were sitting in).  There was only one magic book and I checked it out over and over again.  And then one day my dad took me to the public library and they had a bunch of magic books there and I would check those out.

By the time I was 12 I was doing little shows for birthdays.  But the time I turned 16 I lost interest in it.  Completely.  And then later in high school I got interested in acting and theater.  I went on to college to study theater, and that is how I spent my time.  I didn’t do any magic.  I did comedy improv. 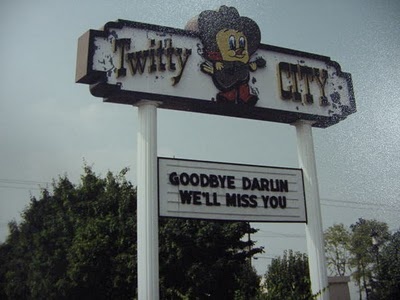 Then I got a job at Opryland as a stage manager.  I managed some of the live shows they had there and special events.  I worked with Minnie Pearl, Brenda Lee, Lee Greenwood…country artists.  I did that for 4 years.

Then I started performing again.  I’d do magic on the weekends at an outdoor mall where they have a walk of fame with country stars.  Very Nashville!  And they hired me to do magic and stuff.  I really wanted to move to LA to get into acting.  I was doing some commercials but the stage managing was paying the bills. 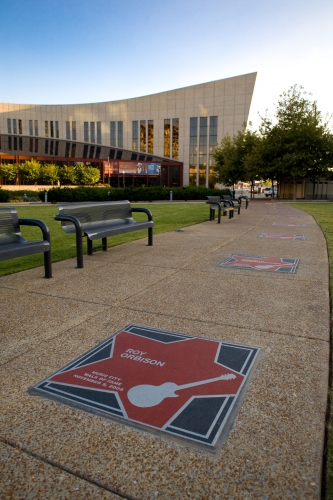 After the birth of their first child, they decided to make a move to Memphis and make a year long commitment of Mitzi living with her parents while Tony gave LA a shot.

I had one contact out there.  It was a relative of a friend of my in-laws.  Harry and Linda Thomason, the writers for Designing Women and Evening Shade, 2 of the 10 top tv shows on at the time.  So I got on the set at CBS and I got to hang and met a bunch of people and visited them for one day.  It got me nowhere.  I didn’t know what I was doing.  I was out there for a while but ended up moving back to Memphis.

After about two years back in Memphis and owning a couple of coffee shops that did really great when he and his partner had one, but opening the second was a mistake for them and he was ready to get out.

So oddly one day I was in the coffee shop and I saw this local flyer.  I was thumbing through it and saw this big, huge ad for the Circus Circus Casino and they were looking for magicians.  I hadn’t done magic in years.  I went down to the audition with a deck of cards, a rope and some coins in street clothes.  I found out later that is the only reason I got the job was because I was the only one that did any close up magic.  Everyone was doing big stuff.  That isn’t what they wanted.  So that is what started all of this.  And that was 20 years ago this year!

Wow!  What an awesome story.

After working at Circus Circus for 2 years and then a few other casinos he eventually started traveling doing comedy clubs and corporate shows.  Then it was while he was working for Fox Family Channel MC-ing a national show that Disney called and asked him to audition for what was then MGM Studios.  He was offered a contract that day for a year.

While working at MGM someone talked to me about the dinner show and that they were looking for magicians.  But an actor and singer.  It was a musical.  So they need someone to sing and act as well as do magic.  They came out to watch me at MGM do a street show before Fantasmic.  And then I was hired for that.  It was a great series of events that got me here!

Describing his comedy as more Shrek like, that is clean and not offensive.  It’s important to him to have a family show.  After seeing it again, he nailed it, that is exactly the kind of humor he puts out there!

Now with a successful career where is his passion?  We talk bullying! 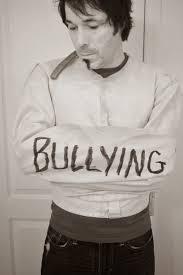 Where does your passion to stop bullying come from?

I was bullied as a kid.  I was always small.

Even in a small school with only 6 kids in a class?

Yes, it was primarily two of them.  Two boys.  They would pick on me out on the playground.  One kid knocked my tooth out when I was in 5th grade.  He slammed my face onto my desk.

Four or five years ago, when bullying became more of an epidemic, I thought about writing a show about it.  Around 2009 I did a show in a performing arts center in Tennessee.  I became Facebook friends with some folks that were at a show.  We were chatting on Facebook and they shared a story with me that their neighbors daughter committed suicide because she was bullied.  She was 16.  Then I learned my son started to get bullied over his feet being pretty small at the time.  After asking my wife one day after school if he could get a pair of shoes in a bigger size she asked him why.  He wouldn’t answer her.  But when we eventually found out why, that hit me about me being bullied and now him.  So I wrote an autobiographical show that’s sorta a story of my childhood.  How I was bullied as a kid and then it goes into the current day of cyber bullying.  I do a Q & A with the kids.  The first time I did it was for a week, with one or two shows a day.  It’s nice for they bus students in and I stay in the same place for the week.  This year I did it for the public on the weekend so parents could go too.  I started to take it to other performing arts centers to share the message.

It’s such an important message!  One that he should be able to share with throughout the country. 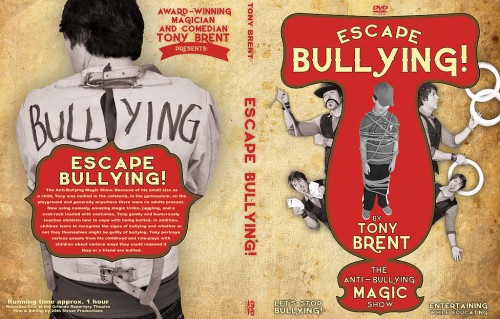 People don’t seem to know what to do about it.  And parents have a hard time dealing with it.  So a lot of time parents ask me questions.  Social Media is a big part of it.  I have about 1/3 of my show that talks about that.  It’s like the crumpled paper – have you ever seen that done before?  It’s a powerful message.

I try to point out that adults can be bullies.  Why some kids bully.  You don’t know their stories. The message is an important one to get out there.  It’s time to make a difference.  It’s not going away.  Social Media playing a role in the fact that online images are even damaging lasting longer, so it’s not going anywhere.

Another book.  Big Foot based on my son and kind of a Beauty and the Beast story. 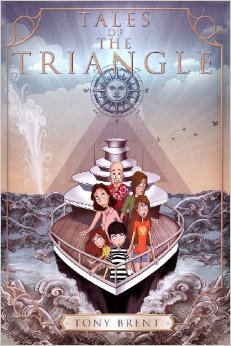 Tony has a book Tales of the Triangle

Strange magnetic fields, UFO sightings, ships, planes and people vanishing? Those mysterious stories about the Bermuda Triangle can’t be true, can they? The Milton children expect to enjoy a week cruising the Caribbean as their father conducts scientific studies; that is, until a most unusual storm occurs. The storm somehow alters each family member endowing them with amazing, superhuman powers! They will need these special abilities and more to elude the secret organization that wants to trap and study them!Tales of the Triangle combines a fast-paced, exciting story along with real scientific experiments that will bring science to life!

And with that, a new book, more shows and hopefully a few other things in the works, Tony Brent is a very busy man with a very big heart!

Tony has provided a copy of his book along with is Escape Bullying DVD for a giveaway!  Make sure to enter here!

Here’s my review of Tony’s Outta Control Dinner show and and make sure you check him out next time you are in town.  Or if you would like to purchase one of his videos or book, make sure to check out those links as well.

Keep in touch with Tony via Social Media! 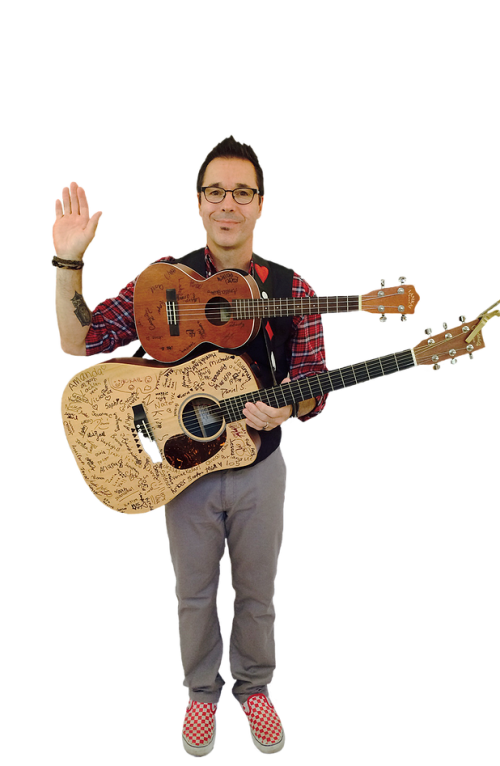