A few weeks ago I shared my time with the makers of Zootopia, Producer Clark Spencer and Directors Rich Moore & Byron Howard. Being the visual type of person that I am, it was quite a treat to visit the current location of Disney Animation (currently under renovation), and it was here you walk into a world of all things Zootopia. While there, we had the opportunity to learn how at Walt Disney Animation Studios, story is the king of the jungle and we got a look of how the words turn into images. 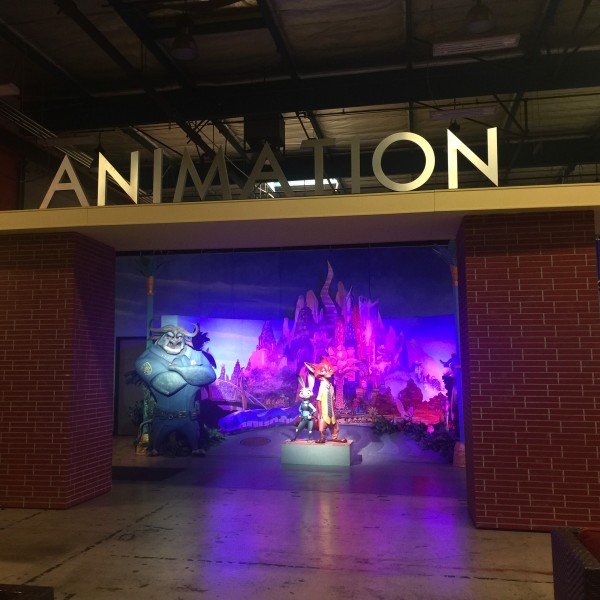 Writers and Co-Director Jared Bush, Writer Phil Johnston, Co-Head of Story Josie Trinidad and Head of Editorial Fabienne Rawley took us on a unique journey of creating “Zootopia,” from script to story sketches to the editing room. I learned so many fun facts and ones that will have you in awe of what goes into the making of an animation.

Zootopia: From Words to Images

In Zootopia, you can find 64 different species unique in topology: elephants have trunks, pigs have snouts, some animals have hooves, some have paws, some have three fingers, some have two. All of these things had to be closely looked at to make the animals still true to what they are in the real world, but perfectly animated for the world created for them.

While researching the variety of animals that were chosen to inhabit Zootopia, one of the challenges of the filmmakers was coming to the realization that not all fur is the same. For example, a strand of polar bear fur is clear. The light reflecting off of it is what makes it appear white. Try drawing that! Think of a rabbit, a fox, or even a sloth. The artists worked hard to replicate their findings to ensure that the animals in Zootopia had that believable element.

It was fun to learn to watch the process of Josie reading as she would while pitching a scene. Learning how much is cut it shocking. But it was made clear that you have to have a tough skin, but also, recognize that everything that makes it in or gets cut tells the final story. And when the final story is fantastic, they know they did their job well.

So once the story is strong, one of the next stops is with the ones that bring these characters to life. Head of Animation Renato dos Anjos and Animation Supervisors Nathan Engelhardt and Chad Sellers shared with us a little about ANIM(AL)ATION. They talked about studying the animals, learning just how slow sloths are. Watching the animals and putting them into situations to watch how a one runs, or dances was part of the research. These 3, along with the talented artists of the animation team, merged animal and human behavior to create the unique and varied performances of the animals of Zootopia. Take a look at how it all comes together.

I am so excited about this film!

With over 700 drafts and over 550 animator that worked on the film since the beginning just under 5 years ago, the research was taken very seriously. After visiting Kenya, they feel that they are just beginning to share a little of what they learned of the most interesting characteristics of animals. Learning things like how an animal may drink, blink, and even that some animals aren’t really all that smart. All of this was used to shape and mold the characters of Zootopia.

After learning the process of bringing it all together, we got to take a few photos via green screen and made this fun little video.

The modern mammal metropolis of Zootopia is a city like no other. Comprised of habitat neighborhoods like ritzy Sahara Square and frigid Tundratown, it’s a melting pot where animals from every environment live together—a place where no matter what you are, from the biggest elephant to the smallest shrew, you can be anything. But when rookie Officer Judy Hopps (voice of Ginnifer Goodwin) arrives, she discovers that being the first bunny on a police force of big, tough animals isn’t so easy. Determined to prove herself, she jumps at the opportunity to crack a case, even if it means partnering with a fast-talking, scam-artist fox, Nick Wilde (voice of Jason Bateman), to solve the mystery.