There is something so elegant and proper about Cate Blanchett.  I mean even her name is, well, put together perfectly.  She has this Old Hollywood look about her, that makes it kinda hard not to stare.  So to see her play such an evil woman as the wicked step mother Lady Tremaine for Disney’s Cinderella, it was fun yet odd to see someone as beautiful as her to be so mean.  But even that she does perfectly. 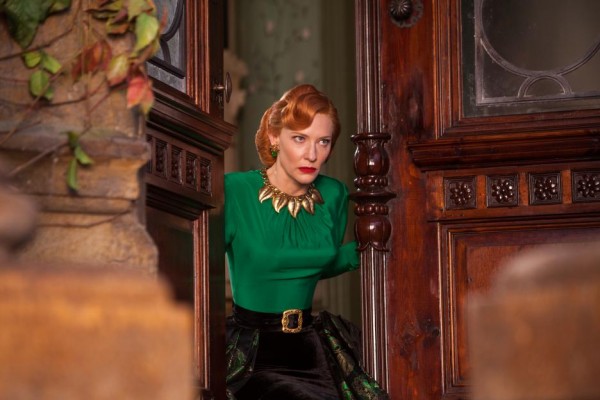 Cate was kind enough to sit down for an exclusive interview and chat about her role, the scene that made her cry, and how she knows firsthand what it’s like to deal with grief.

Did you go after this role?

Yes, like a rabid dog, (laughs), and I didn’t get the Cinderella role, though I had so many friends who asked me what I was doing in the summer, and I said, ‘I’m in a live-action version of Cinderella,’ and there was a big kind of awkward pause. And they didn’t quite know how to ask me ‘Are you a little old to be playing Cinderella?’ Yeah. A bit Bette Davis. No, it sort of landed in my lap, actually. 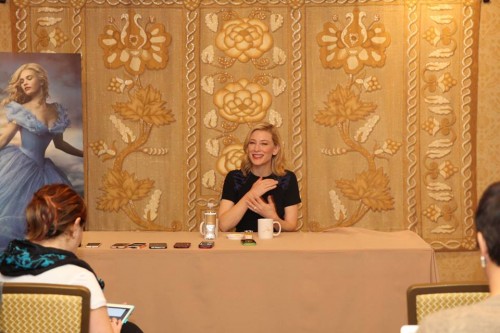 I was very lucky. When Sandy Powell and Dante Ferretti were on board, and they’re two of the greats that they’ve created such extraordinary visuals in modern cinema. And then Ken Branagh came on board, who’s so fantastic with actors and with language, so it was kind of a perfect storm.

I think the chemistry between Lily and Richard is palpable, and I wept like a baby, completely inappropriately and out of character when they waltzed for the first time. The music is beautiful, but also it was really big feat because Lily was cinched in so tightly, and that dress was like an armored tank, and he was in 700 layers of wool, and the dance was really athletic, and they acted like a dream. And the chemistry was palpable, and I just I wept because it was beautiful to watch.

I think maybe being the mother of sons I found it very, very moving, and every time I see it, I do cry a lot. I love the scene between Derek Jacobi as the king and Richard Madden as the prince. The wonderful thing about the film, I think, is that, you know, we try and shield our children from moments of grief, and I know it from having lost a parent at the age of 10.

Children are resilient. In a way, it’s harder I think, to lose a parent, you know, the age the way that we are. Well, I mean, I might be a 1,000 years older than you all, but I found that really moving.

I thought, for him as a man to be curled up like a young boy, you know, and I’ve had a lot of friends recently lose a parent, and whether you’re 80 or 8 and you lose a parent, you’re always the child, and so I find that that scene very moving. 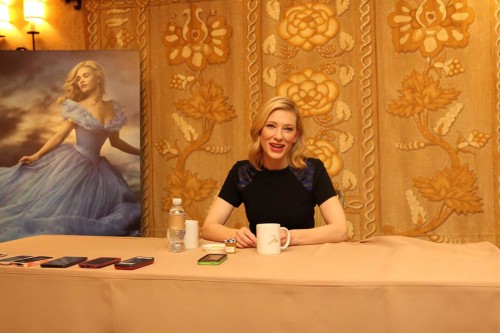 How much fun was it to play a Disney villain?

There are a lot of great Disney villains, and a lot of them are women and they always have fabulous frocks and fabulous hairdos, and so it was an enormous amount of fun. The wonderful message in the film of course is to have courage and to be kind. You know, kindness is a super power, and we try to teach our children you share, you be respectful, you be generous, you be thoughtful, put yourself in someone else’s shoes, and to play someone who can’t do any of those things, to have that as your avatar during the day was quite fun.

How did you prepare for your role?  You’re so evil, and you’re not.  I love it.

Thank you. Often in film, we don’t get a lot of rehearsal time. Actors come in at various different times, and so for me, the most creative two parts of the process early on are your costume fittings, and so working with Sandy (Powell), who I’ve worked with before, and makeup and hair. We get to try things out. 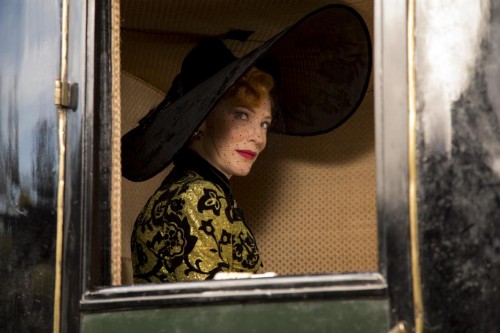 Before you even utter a syllable, we form unconscious judgments of people (the way they smell, by what they choose to wear). How you choose to present yourself—it’s a big part of who we are—and particularly on film because it’s so visual, obviously. Once I knew what those silhouettes were, I knew which bits I didn’t have to act because the costume was revealing those things.

You could play against it. So that was an incredible amount of fun and then obviously it gives you a sense of how the character might move, and you try those things out because the camera’s not rolling—no one’s looking at you.

And the other thing I find very creative is the camera tests. Because obviously the cinematographer and the director are looking for lighting effects and how will it affect on your skin or the hair with wig color. They’re not looking at you, and I always like to see the camera tests because you can try, try things out.

Oh, gosh, yes, it’s been a Sophie’s Choice moment hasn’t it? Yes, I mean, Sandy’s got very, very strong ideas. I mean, that’s what makes her Sandy Powell. We talked really early on. We started emailing pictures that we found inspiring, lighting references, hat references, drapes, fabrics, and we sort of found this pool of images that we were both drawn to and the big offers that Sandy began to make, which I found really exciting is when she pulled out the color swatches. 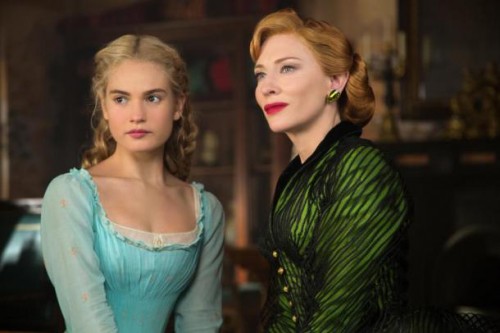 There was a lot of green—my school uniform was green, so I tend not to wear a lot of green in everyday life—and I call that dress that I wore at the ball, the gherkin, that was my least favorite, but everyone seems to like that one. 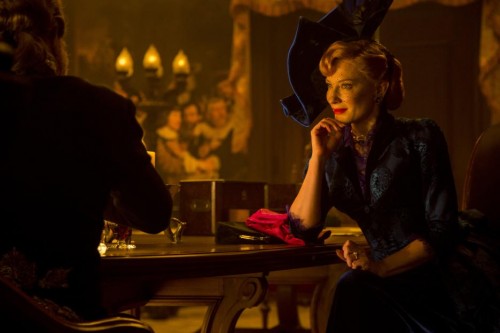 I like the blue one. There’s a scene where the stepmother goes to see the archduke, the poppy gloves and a blue hat. It was sort of, I think for memory, it had a bird on it. I mean, the detail in Sandy’s costumes are just extraordinary.

How much input did you have on the script?

There’s a sense that actors are sort of puppets that get moved around, but no. I’m always interested in input. My husband’s a writer, and I come from the theater, so I have a great respect for the script. Oftentimes, you know, the line that you want to change is the line that you need to make work, and that once you make that line work, then you’ve actually shifted from yourself. 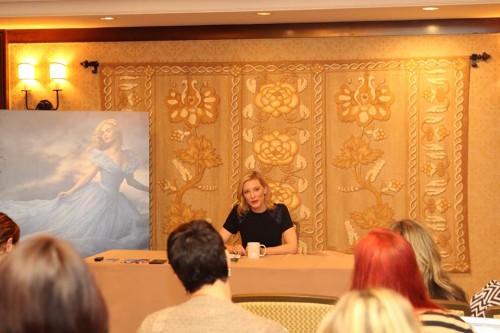 Without getting too kind of complex, it’s quite a difficult neurolinguistic process to actually make someone else’s words sound like they’re your own. And so the one I find that you may find most difficult to make your own is often the one that will unlock the character. It was really important to me, and it was the case when I first read the script that Cinderella had the final line of the film. And I said to Ken, so it’s a really great message. She comes in and says, ‘Well, I’m not gonna be rescued. If this relationship is gonna work, he has to accept me for who I am,’ which I think is wonderful for young girls to say. I think it’s fantastic. And then there was a line at the end where [the prince] said, ‘Shall we go?’ and she didn’t say anything. And I thought, ‘It’s not his story, it’s her story.’ And so then we added in this sense of forgiveness. ‘I forgive you,’ and I feel like that’s a wonderful conclusion to her superpower. Ella has an incredibly generous spirit and she also closes out the film, which I think is great.

Where did you draw the inspiration for that laugh in the movie?  I found that very iconic.

Well, I was mucking around with a friend of mine on set and we were talking about what makes people ugly. I said it’s interesting, you can go out with somebody and think, ‘Oh my gosh, you’re so attractive,’ and then he or she eats, and you think, ‘Oh my god, you’re a pig.’ Or, someone is amazing and you think, ‘Your politics are reprehensible,’ or there’s something about them will give them away, and I said we were talking about dirty laughs. 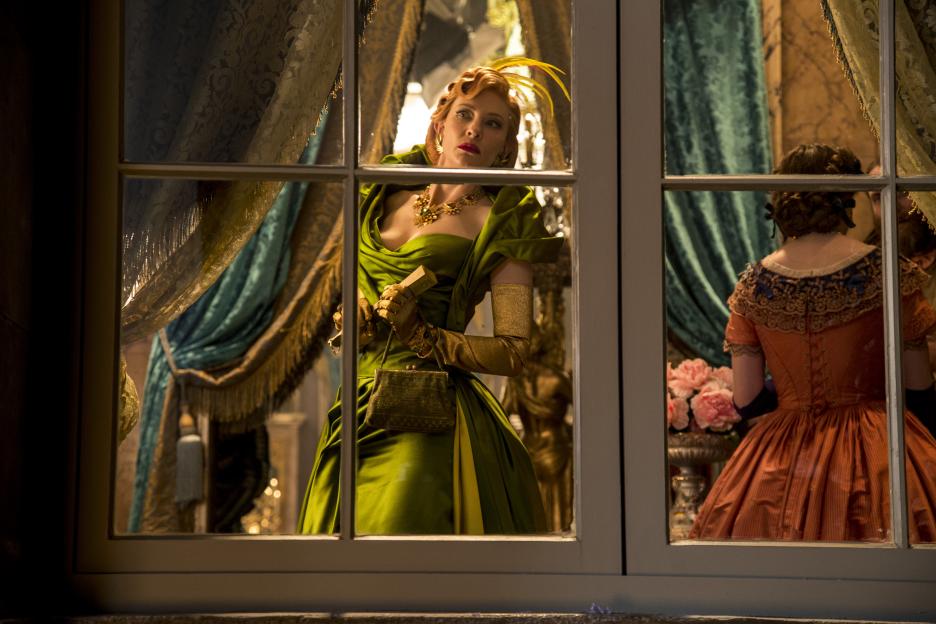 And so I just did it, and she laughed, and there is the gambling scene, and I laughed, and Ken’s face was so revolted. He was really worried. He said, ‘You’re not gonna do that, are you?’ And I said, ‘Oh yes I am, now.’ I think his reaction made me wanna keep it. [Lady Tremaine’s] got exquisite dresses, perfect makeup, and then she opens her mouth and that comes out. And so I thought that that was a bit of a red flag about what was to come.