While watching the trailers to Maleficent, I couldn’t help but smile at their casting choice for Aurora.  Acting since she was in diapers, Elle Fanning is not only visually perfect to play Sleeping Beauty, but an actress that has enough under her belt to be up against the very seasoned Angelina Jolie. 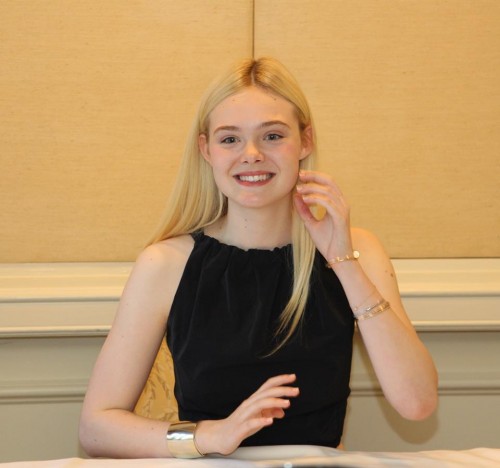 Having a 16 year old myself, I wondered if she would be “normal”.  Growing up in Hollywood can’t be easy, and she’s been in the public eye before she even knew she was an actress.  But I was very pleased to quickly learn that she is very normal.  She giggles and gets excited as she shares her experience of playing Aurora.  She is like a breath of fresh air.

She comes in the room wearing a cute little trendy black crop top with matching pants.  She is so pretty, and mature.  Obviously taking her job very seriously, but at the same time, totally having the time of her life.

Q:  What’s it like taking on the role of a Disney princess?

Elle:  It was my dream.  Like, when anyone asks you like what I wanted to be when I grew up when I was little, I would say, “A Disney princess,” ’cause that’s the ultimate goal in life, I think, for any young girl.  And especially Sleeping Beauty.  She was always my favorite one ’cause I felt like I looked (like her), you know, when you’re little you see which ones you look like the most and she was the one that I looked like the most.  So I would go to Disney store and I would buy her clothes and her shoes.  So to get to play (her) it’s really like a dream.

Q:  Did you feel any pressure living up to the original Sleepy Beauty’s standards?

Elle:  Yeah, ’cause, I mean, obviously I watched the animated movie so many times and it’s like you wanna do it justice because I feel like that Sleeping Beauty — they’ve already done it so perfectly, you know.  I mean, I have to live up to that.  So I did watch the animated film right before I started filming just because she has a certain physicality ’cause she’s drawn a certain way.  And, and she holds her hands in this, (showing her hands and putting her fingers in way a ballerina would)  you know, with these little gestures and her posture and her feet. 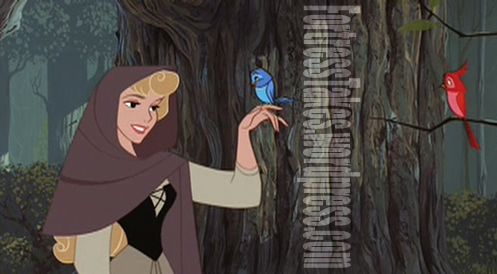 So I tried to bring that charm to the role.  But also, in ours there is a little more to her ’cause she’s not just a delicate princess, you know.  She has some strength and she actually shows real emotion.  She gets sad and feels betrayal, ’cause a lot of secrets are hidden from her.  So it was nice in ours that we could make her more human than just the cartoon.

Q:  I felt like she was so very innocent to the point of being naïve.  How different is the character from Elle? 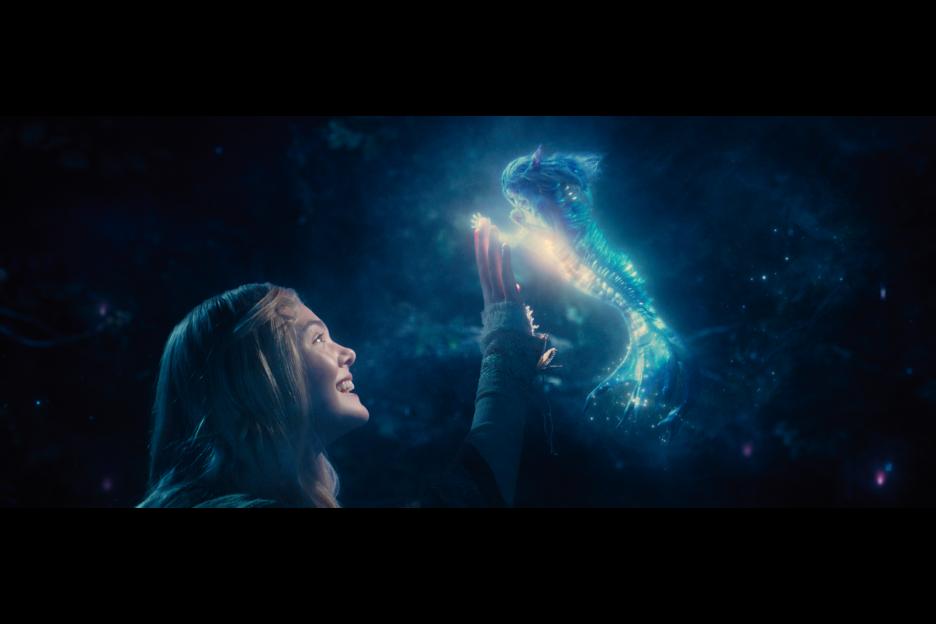 Elle:  Right.  Well she is that way ’cause she’s been trapped, she’s in this little cottage.  She doesn’t know outside world.  She’s raised by fairies.  Definitely very naïve in that way.  Everything she’s learned she’s kind of had to learn on her own and I guess for me, I’m still as happy and as curious as she is, so I like to soak up a lot of information, so we’re very similar in that way.  But I guess, it is exaggerated as a fairy tale.  So her naïveness is like to the point of so much.  Whereas I don’t think any child can be that sheltered like she was in our time.  So I guess I’m, I’m different in that way from her.

Q:  I think you made her very believable and you kept us very attached to her.

Elle:  Thank you.  I tried to do that ’cause it could get boring if it’s oh, that girl is just the one who’s happy and doesn’t know anything, you know?  But I thought that to bring a sense to her that she’s kind of desperate to learn and she’s trying to figure things out, that’d be nice.  And to show that she hasn’t been taught to be scared yet.  She doesn’t know to be scared of things that look different.

Elle:  So when she does see Maleficent, she’s not scared of her, which is very strange for Maleficent ’cause, normally everyone’s so terrified of her ,but this little girl’s not.  Which I think that’s what makes them have this bond that they do.

Q:  Have you been able to see the film yet?

Elle:  You guys have seen more than I have because you saw it in 3D and everything and I haven’t at all.  I’ve seen it but all the special effects weren’t done. 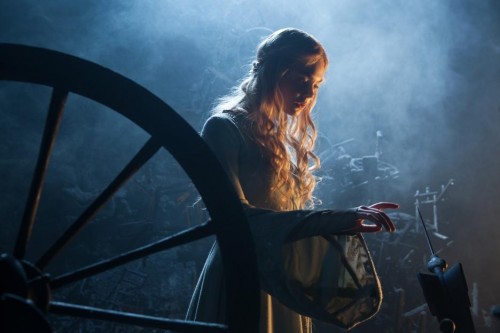 Q:  What was your favorite scene to shoot?

Elle:  To shoot?  Mine was when I pricked my finger on the spindle ’cause it’s such an iconic (scene).  I mean, when I think about the original, that’s the scene I think of.  To film that scene, it was the very last day of filming that we did.  So I was like, oh gosh, and it, kind of everything was building its way up to that monumental moment and I felt wanted to do it right.  Everything has to be a certain way.  ‘Cause that scene impacted me a lot when I was little.

Elle:  It scared me more than Maleficent did because of the way the lights were and it looked like Aurora was morphing into Maleficent with that green and purple light.  So I was like, “We have to have those lights.”  So they changed it and made it more of a green hue and then I had the trance.  I think it turned out good, right?

Q:  Can you tell us about your audition process and where you were when you found out you got the part? 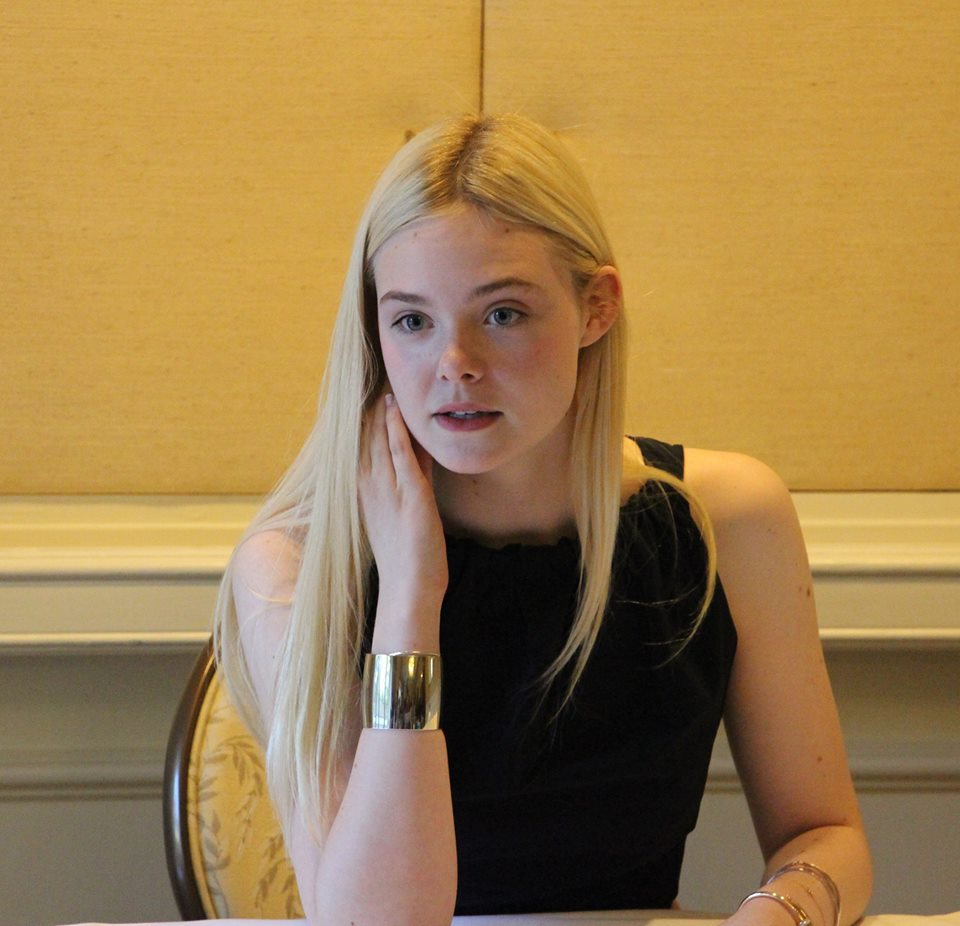 Elle:  Yeah, it’s funny ’cause it all happened really fast.  A lot faster than those things normally do.  I heard there was gonna be a Maleficent movie which it’s from the villains point of view you know there has to be an Aurora in there.  So I was like, oh my gosh, I hope I get to, to be that.  So they asked me to come in, the director Rob, for a meeting.  So I met with Rob and Linda, and Linda was the writer.  She wrote Beauty and the Beast, so I was like so excited to meet (the one) who wrote Beauty and the Beast too.  And so I went and had a meeting with them and we just talked.  I think they just wanted to get a sense of me, kind of what I was like.  And they didn’t describe much of the story ’cause they wanted me to (read it), they kind of already decided that they were gonna give me the part.  So they told me in there that I got it.  And then they handed over the script.  Handing over the script was like the coronation of everything.   I read the script in the car and kind of got motion sickness reading it while driving home.  But I did not stop.  I just kept going.  I was so excited.

Q:  Was it hard for you, without being able to see everything that was going on because of the special effects, to get where you needed to be in that moment? 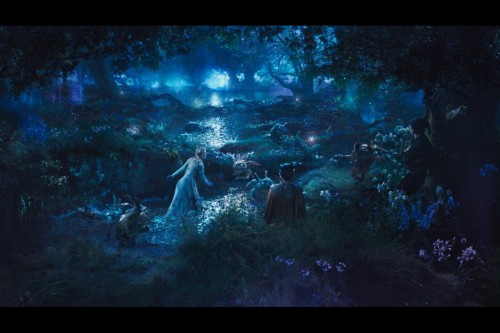 Elle:  I know!  It was a lot, it was more than I’d ever done before.  You’re on a set so there is a stage and things are built on it, but everything basically surrounding you, all the little fairies, those are just tennis balls or little lights.  And there’s like green and blue screens that you’re basically standing in, so you really have to imagine everything.  It also can get a little technical too, but then you don’t want your performance to be prohibited by the technicality of it.  You want to make sure that you’re still playing your character but you still have to be aware of the little hand that you’re holding, but you’re not holding a hand, it’s air.  So you have to make sure how would I hold it if it was there?  We also had to do all this scanning of your body, so what we would do, whenever you had a hair change or a wardrobe change, you stand on this turntable and stand completely still and they turn you inch by inch and scan your body.  So then that makes a virtual you into a computer and then they can take that virtual you and put you onscreen.  Yeah, so when I did all the floating and stuff, a lot of that was manipulated.  I don’t know how it works but they did it.

Q:  Do you feel bummed out that you got a princess role with no singing?

Elle:  I know!  I was thinking about that!  I was like, I’m surely gonna get to sing the song, you know?  But I think that for this one it just didn’t happen.  Also for Lana Del Rey, she sings that song in our trailer, and it’s so perfect.  I mean our movie’s more gothic, you know?  So it’s nice to have her haunting voice, you know, a different take on it than just the original one.

She is adorable!  She made a fantastic Aurora and I feel like she really got the point across that she wanted of her character to not know fear and having that sense of wonder.  You’ll see for yourself when you take your family to see Maleficent!