“Now I’ll never be Father of the Year”
My wife’s family has a tradition – I believe Eastern European in origin – that prevents babies in the family from getting their first haircuts until they’ve turned at least a year old.  Amy and I have carried on this practice with our first three children, but last night, I decided, “The heck with tradition,” and gave Chace, our three month old son, his first haircut.
With a moving ceiling fan.

Yes, this actually happened, and while I’m joking about the haircut, I’m not joking about the ceiling fan.  It was fairly tragic and one of those parenting slip-ups I doubt I’ll ever forget.  It sounds incredibly dumb (because, let’s face it, it is), but I wasn’t being careless or throwing him in the air or anything like that.  I was removing him from the front carrier I was wearing and I lifted him, shall we say, a trifle too high.
My heart practically stopped when his screaming commenced and I had the full realization of what I’d done.  I saw the horror spread across Amy’s face and I wondered briefly if she was going to call DCF on her dumb husband.  I know mistakes can and do happen, but they rarely involve your infant son’s head.  I felt guilty and stupid and I paced in small circles waiting for a phone call back from the on-call pediatrician.  In the meantime, Amy fed the baby and calmed him down. 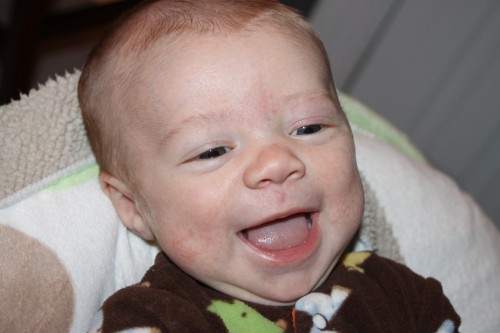 We inspected the damage: small cut above his left ear with a bit of swelling…superficial scrape across the top of his head.  No blood, but now our worries turned to the threat of a concussion.  As I stood there, apologizing repeatedly to my son who has no idea what the word “sorry” even means, I thought of other lapses in my generally awesome parenting that led to injuries – or at least phone calls to the doctor – with the other kids.
I remembered turning my back on Parker just after he learned to crawl and he went right off the edge of our bed.  I remembered Cailin taking some of her first steps in a nearby playground and getting creamed by some kid on a bike because I was too far away.  I remembered Kylie playing at the top of the stairs in our house, slipping, and tumbling all the way down because I was just beyond an arm’s length away.  Boy, I am an awesome dad, I realized.  Fortunately, my wife and I have forged four durable, bendy, hard-headed kids.  Luck may have prevented serious injuries, too.
This morning, thankfully, Chace has been all smiles and seems all but completely healed following his trauma.
I’ve yet to meet perfect parents.  We all do dumb things that will directly or indirectly lead to our children getting a little banged up.  If you love them, you’ll feel awful about it and then move on.  Terrible news, like the mother in southern California, helps to keep things in perspective, too.  It seems that all too often we are hearing about parents intentionally harming or trying to harm their own children.  These incidents must make national news at least weekly.  I felt disgusting accidentally hurting my child and I cannot understand the dark place where a person must be to do it on purpose. 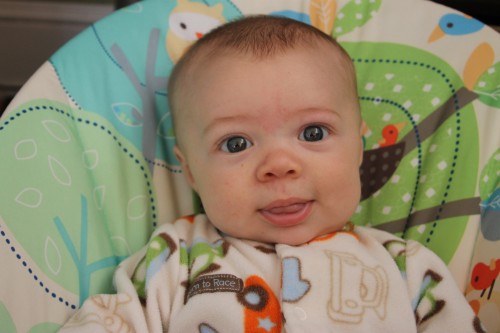 Just remember, your kids are going to get hurt one way or the other.  Your job is to love them, patch them up, and keep going forward.  And Chace, I’m sorry about your head, buddy.
I’ve shared mine – what were your most bone-headed parenting moves?