Ironically as I write this post today I am sitting on a plane enjoying my favorite Marvel movie. With Guardians of the Galaxy Vol 2 on Bluray, you too can do the same. Join Peter Quill and his fellow Guardians on an adventure once again, but this time with a behind the scene clips and more.

Guardians of the Galaxy Vol 2 on Bluray 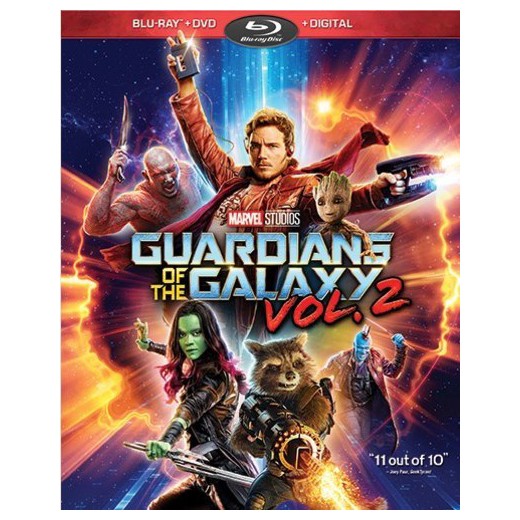 Set to the all-new sonic backdrop of Awesome Mixtape #2, Marvel Studios’ “Guardians of the Galaxy Vol. 2” continues the team’s adventures as they traverse the outer reaches of the cosmos. The Guardians must fight to keep their newfound family together as they unravel the mystery of Peter Quill’s true parentage. Old foes become new allies and fan-favorite characters from the classic comics will come to our heroes’ aid as the Marvel Cinematic Universe continues to expand.

– The Making of “Guardians of the Galaxy Vol. 2” – A four-part, behind-the-scenes look at the making of the film, done in the style of classic-rock album liner notes.

– Visionary Intro – Director James Gunn provides context on how he continues and expands the storylines of these beloved characters in “Guardians of the Galaxy Vol. 2.”

– Gag Reel – Laugh out loud at all the hilarious off-script shenanigans and bloopers that took place on the set of “Guardians of the Galaxy Vol. 2,” featuring all your favorite Guardians.

– Four Deleted Scenes – Check out four specific scenes that had to be cut from the film, including two extended scenes and two deleted scenes.

– Audio Commentary – Check out a special narration of the film by director James Gunn, who guides fans through an inside look at the making of the movie.

All the features listed above plus four extra exclusives:

– Three Scene Breakdowns (Digital Exclusives) – We’ll reveal the anatomy of a few key scenes from the film. Discover the process in bringing these scenes to life. It starts with a doodle and the rest is film history. Audiences will be given the option to view 5-6 layers of specific scenes in the film. Scenes include “Eclector Escape,” “Gamora and Nebula,” and “Rocket and Ravagers.”

Kurt Russell on the set of GOTG Vol 2

I was invited by Disney to attend D23 to share my experience with my readers. All opinions are my own.