Having survived the ‘tween years with my now 15 and 17 girls, I feel like I am a well versed in what that emotional roller coaster ride is like. That is what makes the familiarity of 11 year old Riley from Pixar‘s Inside Out so relatable. Whether you are a parent or if you just remember that time in your own life, it makes the those voices in your head come to life and I know it made me wonder, who was the brilliant mind behind this idea and how did it come about? Lucky for me I had a chance to ask those very questions and got those answers from that very person that thought it all up, Director Pete Docter. He and Producer Jonas Rivera answered some questions without giving too much away, and here’s my chance to share some of that with you. 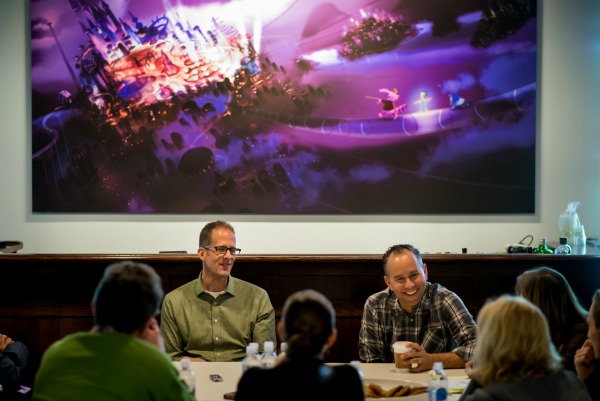 Inside the Minds Behind Inside Out

Now, I should mention I only saw just under an hour of the film, so I don’t know how it ends or even some of the biggest parts of the storyline, so these questions are based on what I did see and careful not to spoil any of the film.

Watching the film you can see that Joy seems to lead Riley, so I wondered if they ever considered a more neutral leader of the mind?

“We did, in the first draft we had logic that was kinda of leading everyone else. But this is a story told from a parent’s point of view, so there has to be this relationship with Joy, who is our lead, and the kid. So we need to leave something to the kid”, shared Pete. 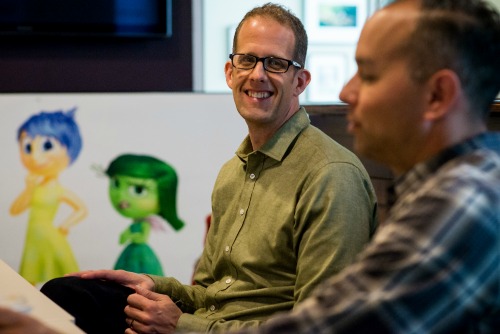 He further talked about how these characters in the mind don’t run your life and make you into some type of robot, for that wouldn’t have worked. So ultimately they came to the conclusion that the “logic” leader they were thinking about was Riley. For we don’t choose the emotions we are feeling. We don’t choose to be angry, or sad, or in fear. What we do have is the choice on how to react to those feelings.

So with that, were there any emotion characters that didn’t make the cut? Well, Pride was considered, but that was too similar to a combo of Disgust and Joy. There was also talk of having Surprise as well, but in the end they found the ones that they chose pretty much covered all they emotions just right.

I found it interesting as well that they made the characters out of this “boiling energy”, as Pete describes. “We wanted to make sure these guys didn’t look like little humans or Muppets or anything. They look as our emotions feel to us. Through that we were able to fall back on all this amazing animated history that we grew up with and love, like Chuck Jones and the early Disney films.” 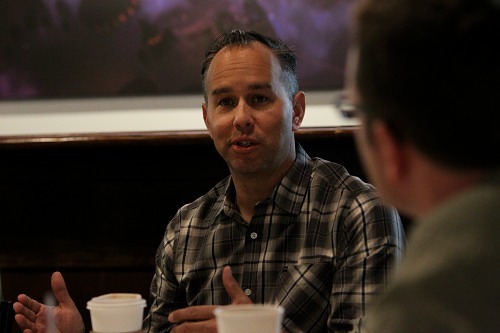 I love how they made the characters look as the feelings they are portraying. “It was fun to break a lot of the rule of our medium while making this film”, added Jonas.

Let’s talk about where these emotions live, Jonas described Headquarters as a cross between an Apple Store and a It’s a Small World. When you see the movie, you may just see that for yourself.

I wondered if Pete has shown his daughter Elie the film completed yet since she was the inspiration and he had. “Yeah, she said, ‘Good movie dad”, which, I don’t know”, he laughs.

Well, I know I loved it, and my teens will love it too. It’s so good.

If you are one of those that look for the Easter eggs, this one has several. I don’t want to spoil the search, but a few things to look for would be, the Pizza Planet Truck from “Toy Story” and bumper stickers on the cars in San Francisco from “Cars” to name just two.