I’ve attended countless Mickey’s Not So Scary Halloween parties and Disney’s Magic Kingdom. Last year I got to get in on the fun and got an up and close look at some of the fun. This year, however, we celebrated in the rain. Yes, that’s right, there’s no stopping Mickey’s Halloween Party Rain or Shine. So where do you go? What do you do? Here are some things that my daughter and I did during the down pour during our visit. 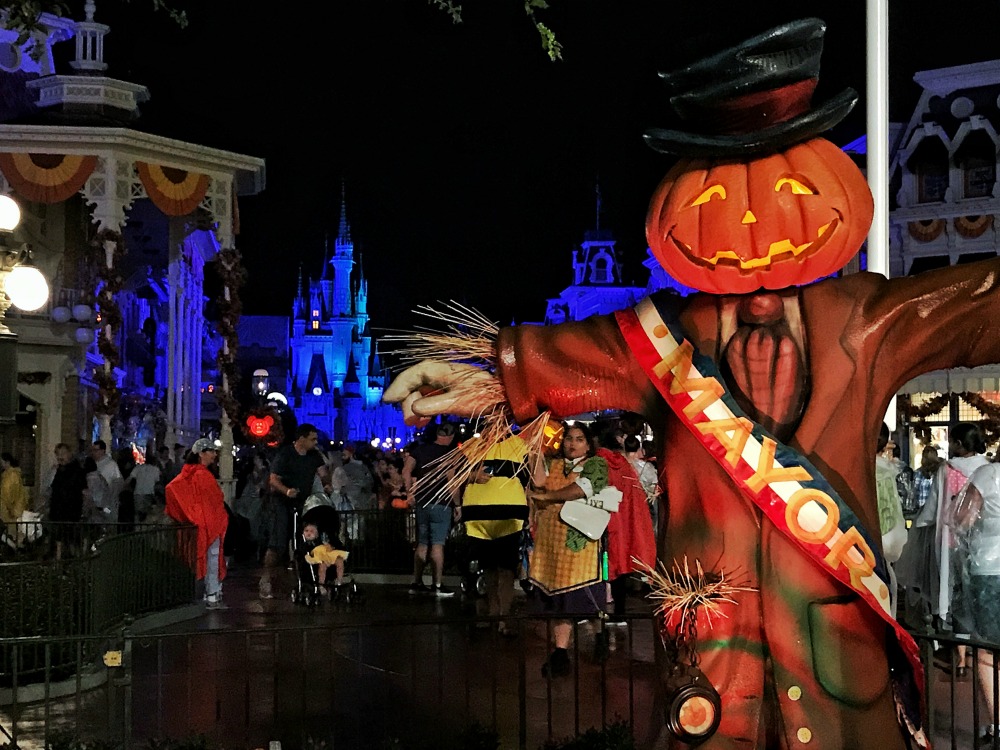 Wear your favorite costume for Mickey’s Not-So-Scary Halloween Party for this separately ticketed event in Magic Kingdom park. (Please read the official costume guidelines at Mickey’s Not-So-Scary Halloween Party for children and adults.)A perfect event for kids of all ages with a chance to collect frightfully delightful treats at marked spots throughout the park. Bags are provided, and the candy is plentiful! 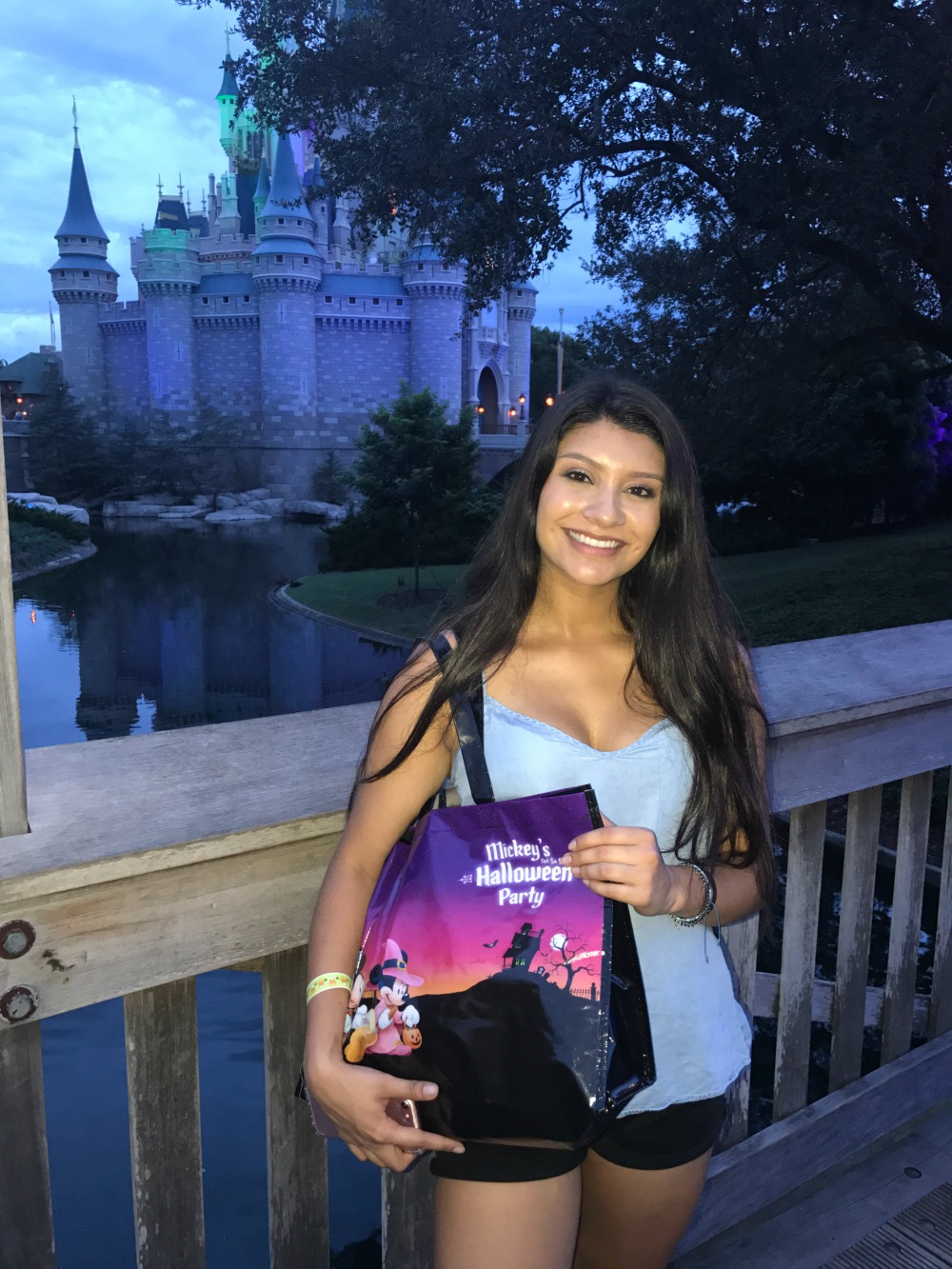 Let me mention the inevitable. If it rains, especially with lightning, chances are the 3 main attractions Mickey’s Halloween Party offers will be delayed or canceled.  With that said, even though the party doesn’t officially begin until 7:00 p.m. you can enter the park starting at 4:00 pm with their Mickey’s Not So Scary Halloween ticket. Once you enter with your special ticket, you will be issued a wristband. If happen to already be in the park, just go to the main entrance to have your ticket scanned to receive your band.

The Ghost Host from the Haunted Mansion invites you to “drop in” as Disney Villains light up the night with fireworks and a wicked version of melodies from Disney’s past that echo through the night—and creepy colors crawl over Cinderella Castle. 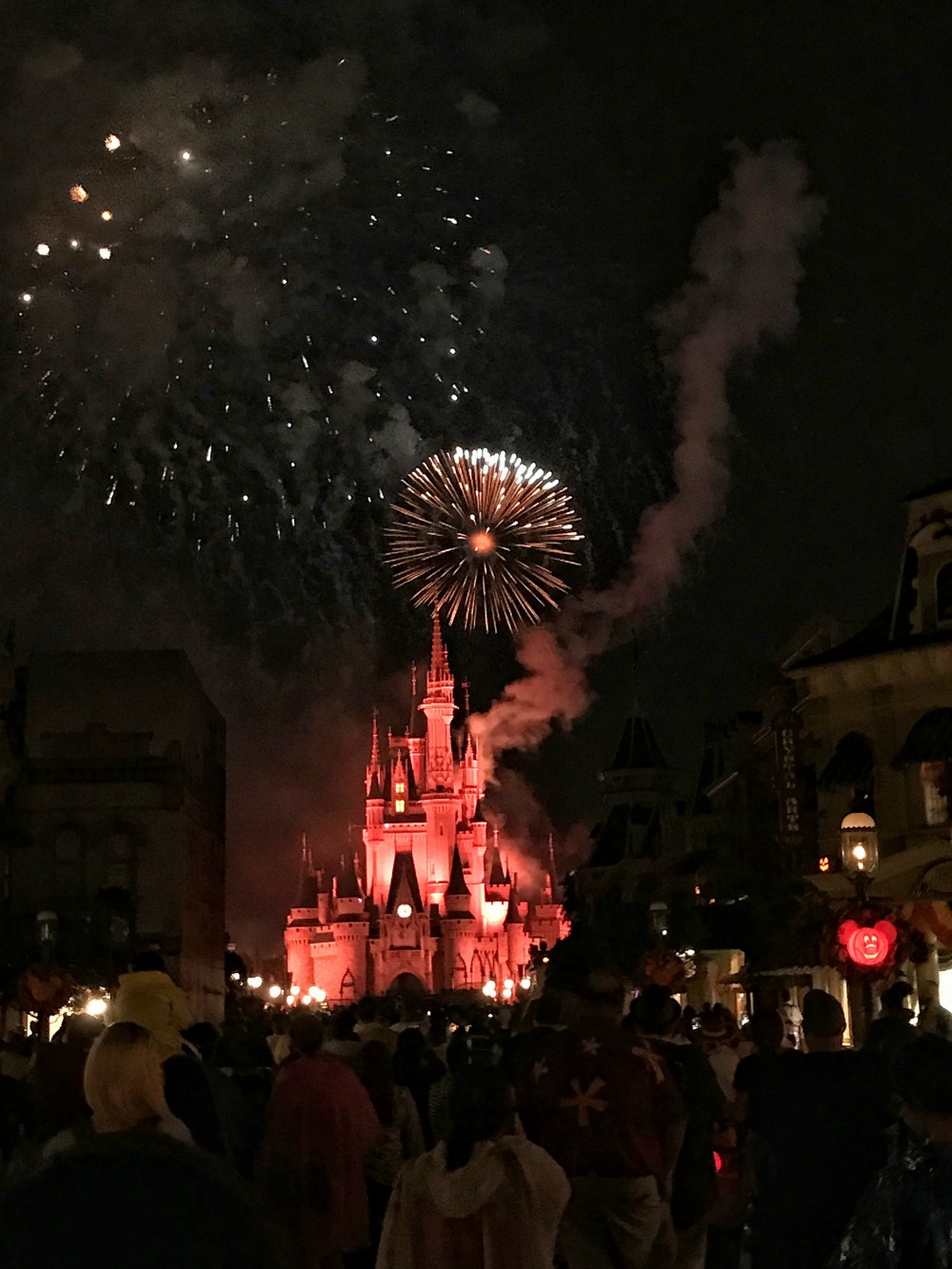 We were lucky to catch the show on the way out. It’s a spectacular light show with the most beautiful fireworks.

Watch the live show on the Cinderella castle stage starring the Sanderson Sisters from Disney’s film Hocus Pocus. Winifred, Mary, and Sarah take over the Magic Kingdom to throw the “best, evil Halloween party this side of the graveyard.” 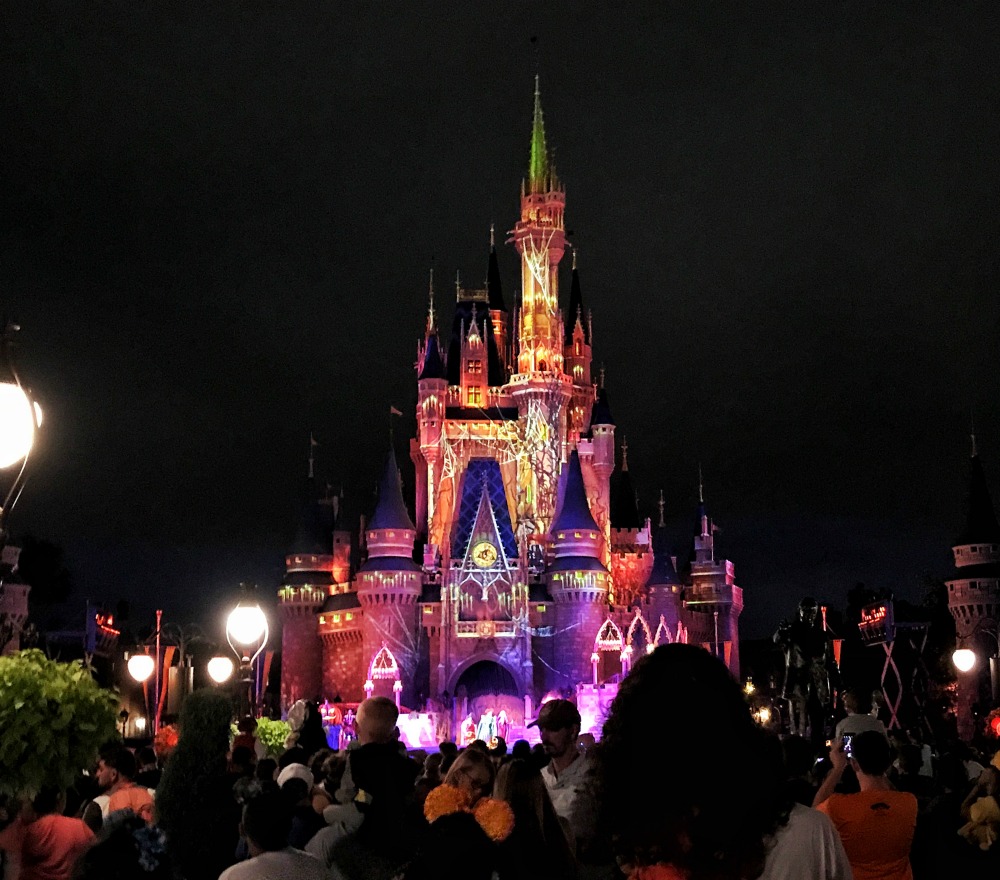 The Disney villains help create the Hocus Pocus Party Potion to cast a spell on all the partygoers. See Dr. Facilier, Oogie Boogie, Maleficent and other villains too. But my favorite part of the show are the projections and special effects on the castle.

Prepare for a cauldron of grave-digging delights as the stars of the Haunted Mansion steal the spotlight in this family-friendly parade. Boo-lovers beware—you’re sure to have one scare-tastic time…

So what do you do if it rains?

Since the park is open to a limited amount of people it’s a great time to take advantage of short lines. There are plenty of rides open and indoors, keeping the fun alive while staying dry. We spent a good portion of our night in Tomorrowland. Space Mountain had less than a 25-minute wait and all the other rides we didn’t wait longer than 5 minutes. 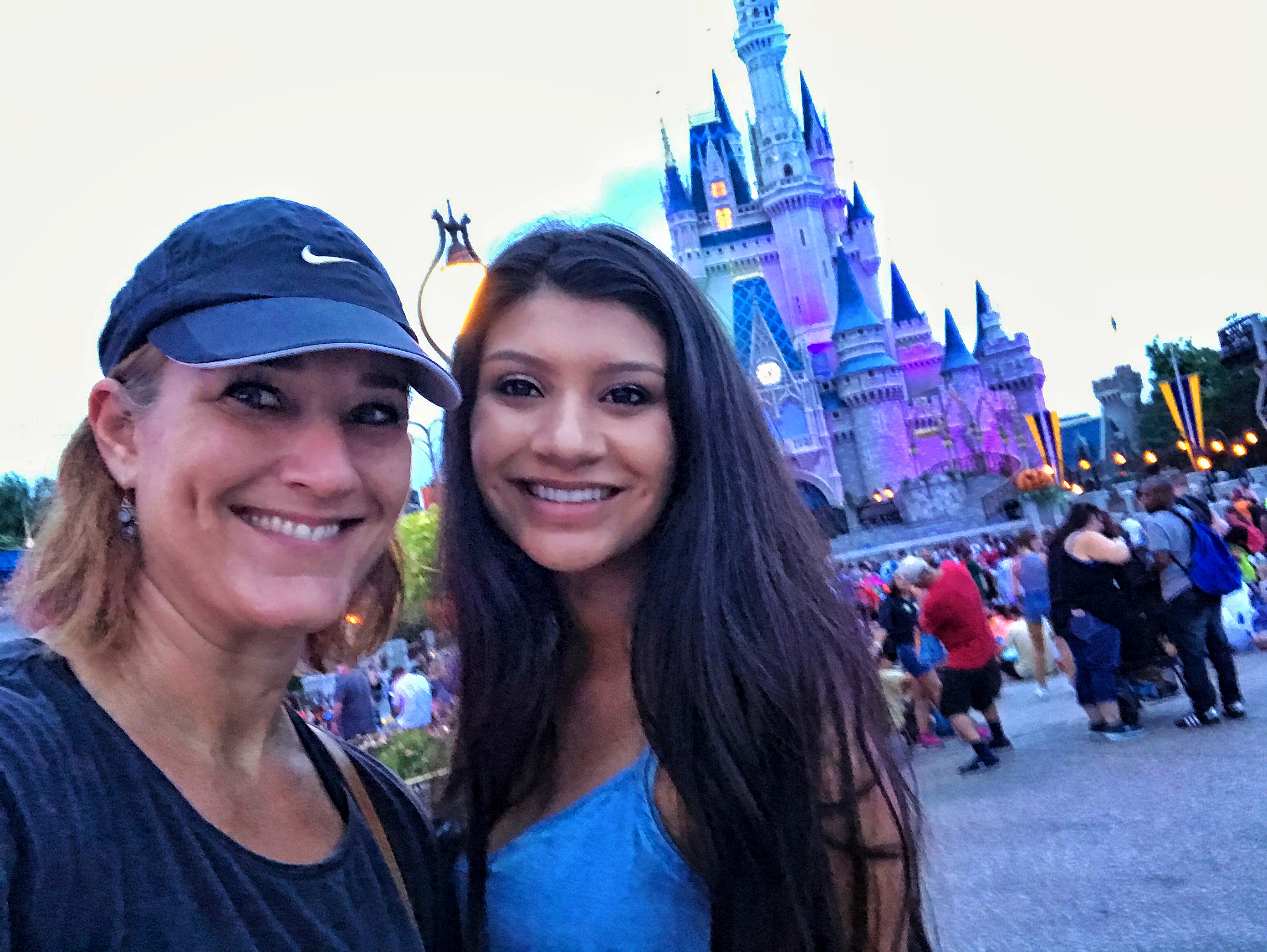 Ponchos are available, but they aren’t cheap. So I would suggest bringing some with, for it really will help keep the rain from making a it’s a small world – Sing along to the classic anthem of world peace during a delightful musical boat tour hosted by the children of the world. From a colorful dock, climb aboard a cozy boat and set sail along the Seven Seaways Waterway on a 10-minute journey. 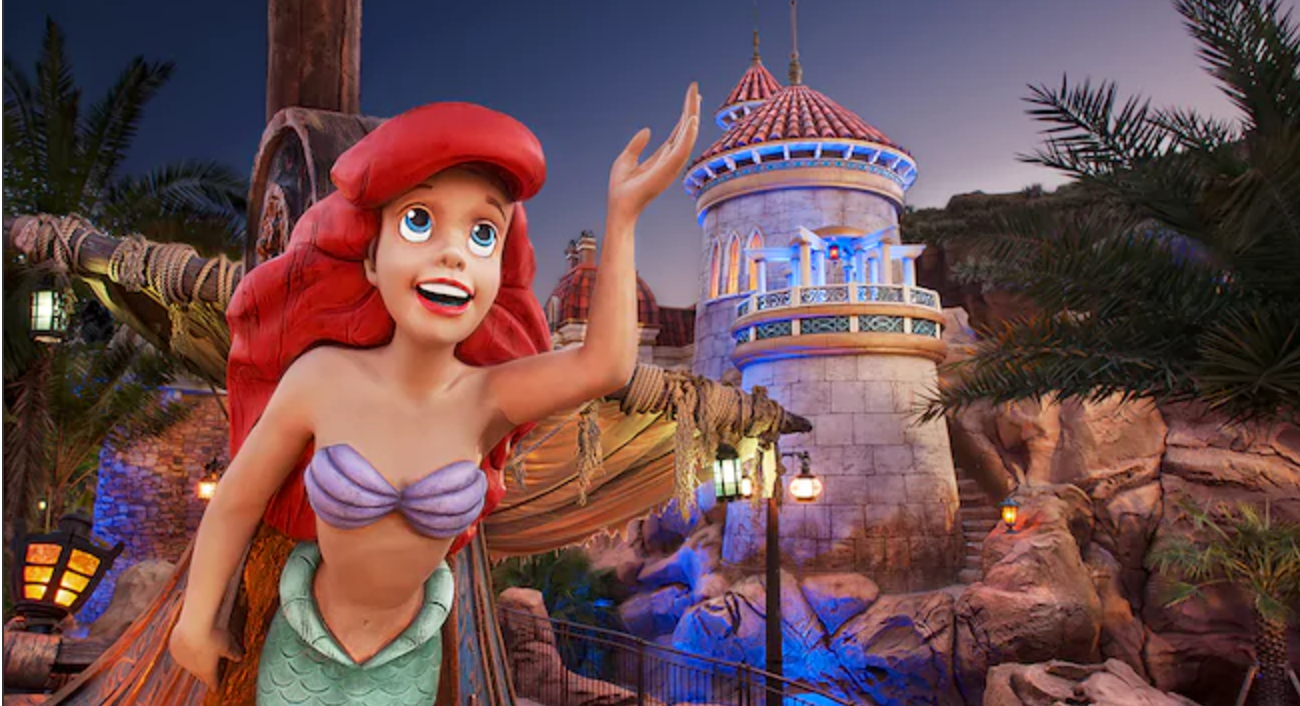 Under the Sea – Journey of the Little Mermaid – Hear classic songs, relive magical moments and visit memorable places from Disney’s The Little Mermaid during your underwater adventure—from Ariel’s gadget-filled grotto to a boisterous crab-conducted bandstand to a sinister eel-infested lair.

Mickey’s Philharmagic – Join Donald Duck on a whirlwind tour of some of the most memorable songs in Disney animation history.

Peter Pan’s Flight – Sail high into the moonlit sky with Peter Pan. Board a colorful galleon and, with the help of some pixie dust, embark on a high-flying adventure, passing many of the unforgettable settings and scenes made famous in Disney’s animated film, Peter Pan.

The Many Adventures of Winnie the Pooh – Glide and bounce and swirl through some of the most popular scenes and settings of Winnie the Pooh. Board a giant Hunny Pot and get lost in the pages of A.A. Milne’s classic tales, as you journey to Hundred Acre Wood.

Meet Minnie Mouse, Daisy Duck, Donald Duck and Goofy as they join the circus. – Enter Pete’s Silly Sideshow at Storybook Circus to meet some of the Big Top’s biggest stars. There’s Minnie as the beautiful poodle trainer Minnie Magnifique and Daisy as the mysterious fortune teller, Daisy Fortuna. Donald plays the role of snake charmer The Astounding Donaldo, while Goofy appears as daring stuntman The Great Goofini. They’re having so much fun, you may just want to join the circus yourself!

Enchanted Tales with Belle – Explore Maurice’s cottage and workshop—home to mementos and gadgets—before being magically transported to the Beast’s library. Once there, you’ll share moments with Belle, and you may even be invited to play a part in her famous story. Will you be an enchanted object… or perhaps fill the role of the Beast with a heart of gold.

Meet Ariel – Venture into a seaside grotto, where you’ll find Ariel amongst some of her treasures. She has gadgets and gizmos aplenty, and she’s always happy to make new friends – especially human ones!

Meet Cinderella & Elena – Feel like a fellow princess as Cinderella encourages you to believe in your dreams. And join Elena as she readies herself to rule the enchanted kingdom of Avalor, she creates her own hero’s journey—stopping along the way to meet Disney Princesses and Guests at Walt Disney World Resort.

Meet Rapunzel and Tiana –  Rapunzel is very excited to meet you and share stories of her many adventures… and maybe even hear about some of yours too! While Princess Tiana is delighted to make your acquaintance and discover a new friend, especially one whose dreams are as big as her own.

Space Mountain – Whiz past shooting stars and celestial satellites during your thrilling space ride. Behold streaking orbs of light, wayward comets and migrant meteors. Dip and careen into the inky blackness as futuristic Starry-O-Phonic Sounds echo all around you. Feel the push and pull of gravity as you soar into a swirling wormhole for re-entry!

Buzz Lightyear Space Ranger Spin – Do you have what it takes to stop Zurg and his army before it’s too late? The fate of the universe is in your hands.

Monster’s Inc Comedy Club – Having discovered that a laugh provides 10 times more energy to Monstropolis than a scream, everybody’s favorite one-eyed monstrosity decided to open up the Monsters, Inc. Laugh Floor—a comedy club starring monster comedians—as a way to capture the giggles and chortles of humans to help run the city.

Carousel of Progress – Look back to the past and get a glimpse of the future at Walt Disney’s Carousel of Progress, a fascinating 21-minute Audio-Animatronics stage show celebrating the evolution of technology throughout the 20th century and today. 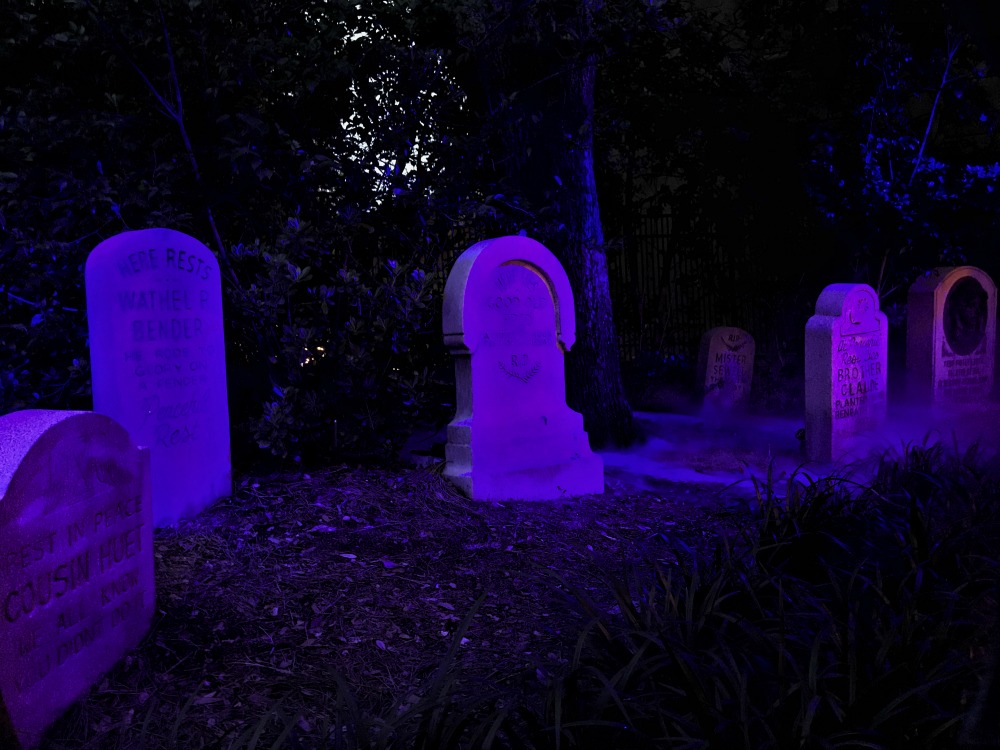 Haunted Mansion – Blending giggling ghouls with things that go bump in the night, this classic attraction promises to send chills up and down your shivering spine.

Meet Tinker Bell – Step through the magical portal to join Tinker Bell. She showcases a collection of her treasures from the mainland. After spending time with a fairy, you too may wish you could fly.

Pirate’s of the Caribbean – Behold boisterous buccaneers drunk on the spoils of plunderin’ during a 9-minute cruise amid the Old World. Sing along as windswept pirates serenade you with their classic anthem, “Yo Ho, Yo Ho (A Pirate’s Life for Me).” And even spy a sly Captain Jack Sparrow from The Pirates of the Caribbean film series along the way!

As you can see there is so much to still do. Even in the rain during the Mickey’s Not So Scary Halloween Party! Thanks Disney for showing us a fun night out, in spite of the rain!