Another Disney classic is now available for you to add to your Blu-ray/DVD collection. Pinocchio, with two Academy Awards®, is one of those films that brings back so many childhood memories for me. From the feelings of being scared to my heart being full by the end, this film fills all those feels.

Now a part of the celebrated Walt Disney Signature Collection, the timeless story of Pinocchio inspires a new generation with its masterful animation, award-winning music and unforgettable characters! With his faithful friend Jiminy Cricket by his side, Pinocchio embarks on fantastic adventures that test his bravery, loyalty and honesty until he triumphs in his quest for his heart’s desire: to become a real boy.

With the new release you know there’s going to be some special features that you will love to watch. What adds to this being even more special is the footage with Walt Disney himself.

Hear Walt himself discuss the making of “Pinocchio” through archival recordings and interviews.

The Pleasure Island scene in the movie shows that there was much more development than what is seen in the movie. Pixar’s Pete Docter and Disney historian and author J.B. Kaufman take you along as they explore artwork recently discovered in Disney’s animation research library, which Disney animators created for this iconic location of the film, that never made it on screen.

I love the old Oswald shorts and this recently restored and scored 1927 short features, Oswald the Lucky Rabbit, who gets multiple visits from the stork and is forced to attempt various methods to help stop the onslaught of baby deliveries. 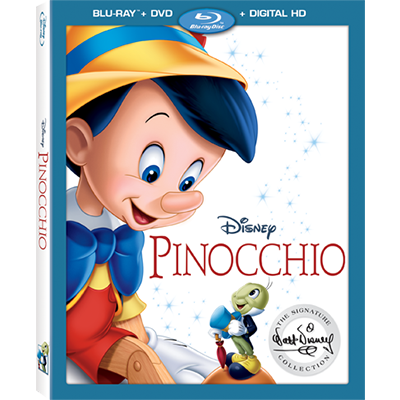 These offerings from prior home entertainment releases include hours of bonus material, such as the making of, deleted scenes, sing-alongs, storyboards and theatrical trailers.

PINOCCHIO is available on Digital HD and on Blu-ray

*I was given a copy of Pinocchio to review and share my thoughts on Trippin’ with Tara. All opinions are my own.