With Pixar’s Inside Out coming to theaters on June 19th, I was recently invited on a press trip that had me just outside of San Francisco in Emeryville on the Pixar campus.  I along with 24 other bloggers were given the privilege of watching just 56 minutes of the film, and then we sat down with the makers of the film in small groups to learn the process.  This session I am sharing was with production designer Ralph Eggleston.  He shared how the fascinating world for Inside Out was created.

Growing up can be a bumpy road, and it’s no exception for 11 year old Riley, who is uprooted from her Midwest life when her father starts a new job in San Francisco. 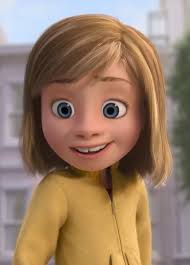 Like all of us, Riley is guided by her emotions – Joy (Amy Poehler), Fear (Bill Hader), Anger (Lewis Black), Disgust (Mindy Kaling) and Sadness (Phyllis Smith). The emotions live in Headquarters, the control center inside Riley’s mind, where they help advise her through everyday life.

As Riley and her emotions struggle to adjust to a new life in San Francisco, turmoil ensues in Headquarters. Although Joy, Riley’s main and most important emotion, tries to keep things positive, the emotions conflict on how best to navigate a new city, house and school.

Pixar’s Inside Out with Ralph Eggleston: Inside the Mind

For this particular learning session, we were in a room surrounded by the original concept art.  It was beautiful, yet many of the pieces of the art were of just specs of colors, and really, just didn’t make sense.  Ralph explained how these were colored and dyed actual neurons that are found in our brain.  YES, they totally did the research to the point to see what those looked like based on different moods that we have.  Calling these “brainbows”, the animators took these and used them for inspiration in the film.  He explained how this type of organized chaos actually lives in each one of us.

Ralph continued to explain to our group how when you look at the wall and how the colors are vastly different and why.  In the beginning of the film it is very saturated in color when Riley was born showing that we are all born with joy being the prominent emotion.  This was done on purpose and was something that Ralph said he fought for, “When I was growing up I remembered when I watch the Wonderful World of Disney or even a Bugs Bunny cartoon, do you remember when a paint brush would kind of come out of the cartoon?  Then the color would appear!  That is what I wanted to create more than anything in the world!”   This is what he was talking about – and of course with Pixar and many years later, Inside Out takes the visualization to a whole new level.

When watching the film you can see the way the mind works as Riley allows the different emotions to become more and more prevalent to her personality.  With this it almost was like making two films at the same time.  There was the Mind World, where the emotions, which are the characters of Joy, Fear, Anger, Disgust and Sadness “live” in Riley’s mind, and then there is the Real World which was the world outside of her mind, how she sees it.

So basically the world in the mind reflects how Riley feels and shows how she sees the Real World.  By the end it is all supposed to come together.  But the journey of how the Mind World and Real World have to come together to work and any little change will affect each other.

I am really looking forward to seeing how that happens, for seeing just under an hour of the film was a huge tease.