Sanjay’s Super Team is the Disney*Pixar short before The Good Dinosaur. Staying true to the standard held for a Pixar short, Sanjay’s Super Team is visually stunning and incredibly moving, with the story told by writer/director Sanjay Patel. It is a little bit autobiographical, with the story being set when Sanjay was just a kid that loved watching superhero cartoons and becomes annoyed by the traditions of Hindu practice with his father. The story of Sanjay’s Super Team takes the two worlds of superheroes and Hindu traditions and brings an understanding between Sanjay and his father. The story is touching, and one that makes you appreciate the customs and traditions that are so important to each of our heritage.

While on a press trip for The Good Dinosaur, we had the opportunity to sit down with Sanjay Patel along with his producer, Nicole Grindle, to talk about the inspiration behind the short, which is a touching story, one that I am grateful to have the opportunity to share with my readers.

The Story Behind Sanjay’s Super Team:

So, those drawings in the notebook. Were those actual pictures that you drew as a child?

Sanjay: No, I wish they were. (Laughing) Definitely not. No that was something that Chris and I did, the Production Designer, specifically for the short, but we had some fun. There was a kind of a fun anecdote for the end credits.

Nicole: Yeah we asked our crew members kids to to do the drawings.

How cool is that?

Nicole: And they were–they took it really seriously. I mean, you know they have parents who work at Pixar and they were like, “What! I can have my artwork in the film?” And they all did their artwork and brought it in and uh we did our best to get them all in there. So that was fun.

Sanjay: Yeah it’s been great. I’ve been able to get the credit for their art work. (Laughing)

Nicole: He told them to ever give their artwork away for free again.

We’ve heard a little bit about the heartwarming story behind the short, can you share the story with us on how Sanjay’s Super Team came to be?

Nicole: Where to start, where to start? There is dimensions to what’s heartwarming. Sanjay has worked at Pixar for almost 20 years and has worked on a number of films there. He started out sort of turning his back on his father’s culture and wanting to fit in as an immigrant and embrace more traditional animation art. And after about 10 years at Pixar you know he got the itch to do something else and was introduced to South Asian art. And fell in love with it and started doing books outside of Pixar and his books were a big hit and these are books, like The Little book of Hindu Deities, that allowed him to reconnect with the culture. He then did his own version of The Rum Iron. And then Pixar said, “Wow.” They saw his artwork, it was at the Asian Art Museum and it was so successful Pixar said, “Hey come to Pixar. We want to put a show on of your work there.” And then John Lassiter saw it and said, “Hey we want you to do a short firm.” And Sanjay didn’t wanna’ do that. (Laughing and turning to him), then you were persuaded to do it and I think the conversation with your father is a great place for you to pick up.

Sanjay: I mean sure. Thank you. Yeah, I mean it’s true. It’s because it’s like kind of a long gestation. I don’t feel like the story just kind of happened overnight. It’s definitely like an evolution of me as an artist and me as like I don’t know, like a dude.(Laughing)

So yeah um I was really scared. I mean that was the thing…I like really started to peel all of it back it was really scared to like bring this sort of me, my identity, my part of my culture and this thing that was so precious to my parents and my community and to work. And I think you know I was like I’ve been at Pixar for so long and I was like convinced, I was an expert. I was like, “You know trust me. Pixar doesn’t want anything to do with this you know. Believe you me.” You know 3 years later I’m completely shocked that we are able to like tell the story and tell it in a way that was so sincere.

Even when the President of Pixar asked me to like try to do this I was like, “Dude we don’t do this here man. This is not part of our brand.” And you know it was like he politely contradicted. He was like, “You know he felt like you know Pixar was always interested in telling new stories.”

Then I finally had a conversation with my father and you know he pointed out that this studio had supported me and educated me for like 20 years and he was like, “They’ve had this relationship with you and they’re finally asking you to try this thing and for you not to try would be bad karma.”  And he said that it was my duty to at least try. Win or lose. He’s like, “that doesn’t matter. That’s not part of the equation Sanjay, but is your duty to at least try.” And I was like, “Dang dad.” (Laughing) So I tried.

What was great is, I would say like John Lassiter, in particular, he just he really believed in the concept from like minute one. He like seemed to like draw out the concept before I even knew it. Like the original concept that I pitched to John- It was about a little boy in India that was kind of ignoring the cultural stories that were carved on the temples all around them.  He had his nose kind of buried in a Western style super hero comic and the short is about the boy appreciating his culture and then I told John because then John asked. “Well where were you born? Where were you raised?” And I told him, “No, I was raised in Whittier or in the San Bernardino. A little bit of both in Southern California.” And then I told him how I spent every morning with my dad and his rituals and my rituals and he really connected with both concepts.

And like the first note from John was like, “and you know Sanjay he’s like just tell your story about you and your dad. If you just tell that as honestly as possible people will connect to it.” And so I just can’t diminish John’s support. I don’t wanna’ say like sell it out or cheese it up, but like he just made it so authentic and so true. He gave me permission to like say things that I wouldn’t say otherwise just because I think growing up in this culture I was always so afraid of exposing my identity, my parents identity, my parents community. Like my normal was always to just try to fit in and so it took John Lassiter to say to me like, “No Sanjay your story, your parent’s story has value here. You have permission to tell it.”  I’m super grateful.

Has your dad seen it yet?

Sanjay: So while we’re making the short at Pixar it’s like we’ve never done anything this personal at the studio in terms of like being so specific to like a father-son, well is me and my dad. And so people were really curious and it was so hard to explain to people that like my dad just doesn’t watch movies.

I think the last thing he had seen was when we had left the U.K. 30 years ago. It was something with Julie Andrews he said ‘cause that was The Sound Of Music. So he had never seen animation, he’s never seen Pixar in animation, he’s never seen any of the movies I’ve worked on. And so it was so surreal to like fly him up to the studio. It’s like the second time he had been there and to like have him come sit down in the theater and watch like an animated story about him and me and our history and like he was super emotional about it.

So was there a private screening for just you?

Sanjay: Just the 3 of us and there was a camera crew taping it. But it was pretty intimate. It was sweet ‘cause he was all business at first you know. He wanted to come and be you know for his son, you know watch the film and say, “Yes it’s very good.” And then when we started talking, he proud of Sanjay and that’s when he went over the edge. He got super emotional.

Nicole: And I mean, he’s a very hard working guy. He works 7 days a week, 24-7, he runs a motel. And here his son really not only was thanking him, but understood who he was and what had sustained him. And I thought you know how can that not be emotional right? To have your child say, “No  I see what you’ve been doing and I appreciate it.” So it was pretty emotional. 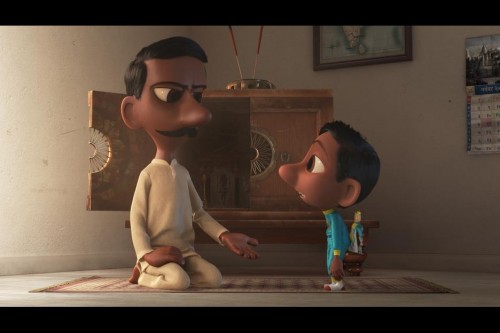 How’d you come up with the title Sanjay’s Super Team?

Nicole: No it always had to be Sanjay and he didn’t like that at first, but you know we encouraged that with the character. It was little Sanjay was always the character and then when we were looking for titles for the film we were trying all kinds of stuff. We did try the, the name Dia to represent the candle ‘cause he wanted it all to be light. We considered calling it ‘Enlightenment’. And finally it was John who said, “It has to have your name on it.” And he said, “I don’t know Sanjay’s Super Heroes or something.”  And because already we had the little action figure saying, “Super team,” we were like, “Yeah Sanjay’s Super Team.” And he wanted the super team to also represent him and his father. 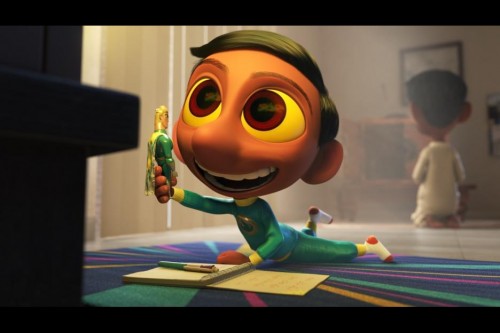 Sanjay: And not superheroes, it’s our team.  It’s about bringing people together, the super team. So that’s how it ended up that way. And he was like, “Oh I can’t believe my name’s gonna’ be on it.” 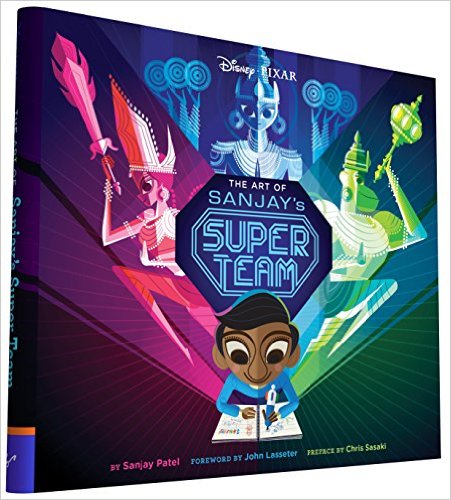 The Art of Sanjay’s Super Team

While I am talking about Sanjay Patel, I must recommend The Art of Sanjay’s Super Team, from Chronicle Books, written by Patel with a forward from John Lasseter. See for yourself why I love it so much.

You can see Sanjay’s Super Team when you go to see The Good Dinosaur, out in theaters now!

*I was invited by Disney*Pixar for the #GoodDinoEvent to share my experience with my readers. All opinions are my own.