Ahhh swoon.  Zachary Levi walks in the room and all the world is right.  Tall, dark, handsome and killer smile…I think his presence got our attention.

The last of the interviews I have to share from my whirlwind of a time in LA for the Thor: The Dark World Event I attended, Zachary Levi was like a cherry on top. 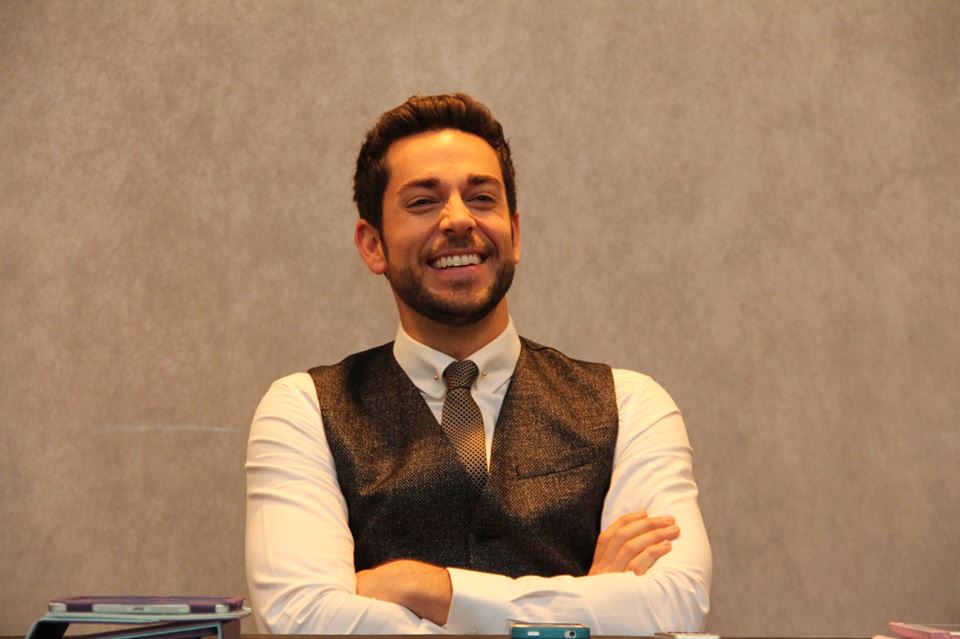 Let’s jump right in there and find out just how Zachary Levi felt about taking on this pretty big role and replacing the first Fandral, actor Josh Dallas.

Q:  We’re you nervous about taking this role and being apart of this huge franchise?

ZL:    You know, I was nervous about coming in and if there was going to be any ill-will from any of the rest of the cast, knowing that Josh had played Fandral in the first film.  Some of the cast knew, I mean, Tom (Hiddleston, who plays Loki) knew, and I think and Jamie (Alexander, who play Sif) did.  I’ve known Jamie for a while, because I was originally going to be Fandral (in the first film) and then Chuck got in the way and I wasn’t able to do it.  And then Josh was able to play the role and did a fantastic job.  But not everybody knew that.  And so I didn’t want to feel like the guy who’s coming in and like taking somebody else’s job away.  But his role on Once Upon a Time conflicted, it was just like what happened to me so it came back around.  So that was the only thing I was kind of nervous about.  Being apart of the Marvel Universe is nothing to be nervous about.  I think you should just celebrate that.   Like you get to be apart of  this incredible comic book lineage and family and universe that they’ve built, which is incredible.  And one of the first days on set Tom gave me a big hug and said, welcome, glad you were finally able to come and do this.  I felt that love from everybody.  And so I, no, I wasn’t nervous beyond that. 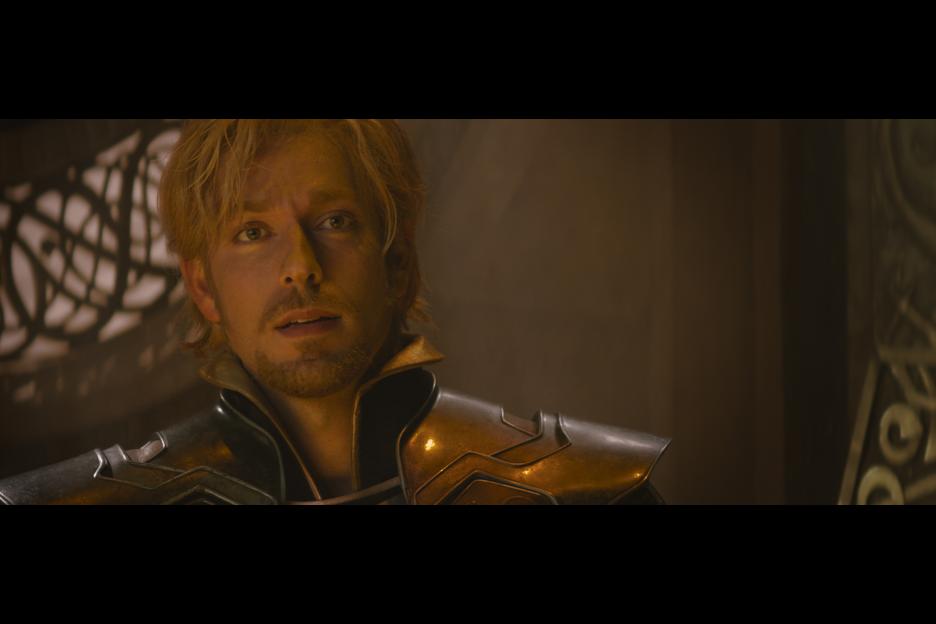 Wondering how battered and bruised Zachary got and what he used remedy the pain?

ZL:  Ha…  Doing what exactly?  I dare say.  You know what, I didn’t get that battered and bruised.  There was a couple, I think I dislocated a rib at one point, but that was a freak accident.  Probably the worst thing that happened to me was (when) I slammed my finger in my trailer door.  Which is incredibly unglamorous.  And that’s just ice and alcohol, that’s pretty much how you deal with that.  It was a really well oiled machine of a set.  Our stunt coordinators and everybody was incredibly good.  And I never at one point felt like I was at risk of getting incredibly injured.  I also wasn’t doing nearly as much stuff as Chris (Hemsworth, who plays Thor) was doing.  I mean, Chris has the lion share of all the action in that movie.  And then myself, and Ray, and Tadd, and Jamie we all some really fun stuff to kind of kick into that.  So, I was reasonable safe and didn’t get too hurt. 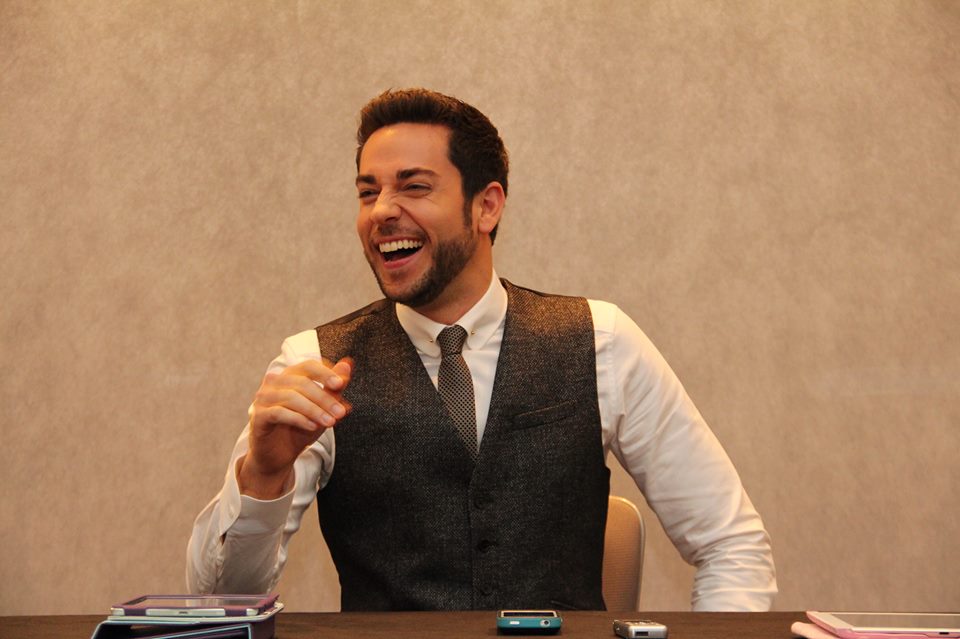 Q:  We’re you a fan of the Marvel comics before this?

ZL:  Absolutely.  Absolutely.  All of it, yeah.  You know, interestingly enough, I was really big into X-Men, the whole kind of mutant category, like X-Men, X-Factor, and X-Force, New Mutants, all that kind of stuff I really, really loved.  Spider-Man, Iron Man to an extent, Captain America.  I went through phases, you know, like I was kind of like, depending on how old I was, or what I was into at the time, I’d be like, yeah, I’m kind of done with that, now I really want to focus on these characters.

The-the mutants were always kind of like, to me the most relatable.  Because as a kid, you thought, well maybe I have that in me it just hasn’t manifested yet.  You know what I mean?  Like I can get to a place and eventually I’ll realize, I am super human and this’ll be great.  Thor is a very unique Marvel character, he’s actually unique, amongst all the comics books, because he’s not somebody who was irregular guy who was thrust into extraordinary situations.  He’s a god.  And how do you relate to that guy?  And I think Marvel’s done a very good job in trying to get you to relate. How do you bring your god to Earth, you know, just as guardian demigod, how do you bring him down to earth and have relatable to human beings?  And they’ve done a great job by bringing Jane into that in the first movie.  And that he falls for a human and that he was able to kind of realize what it is to be human through her, a little bit.  And the other humans that he interacts with and encounters in the first movie and that just continues through the Avengers and the second movie.  So kudos to Marvel for kind of understanding that he’s a difficult character to relate with on the surface.  He’s not a human being.  Almost every other Marvel character is a human being.  I still read Thor as well.  Yeah, and the Avengers, I mean, you know, when you get everybody in one comic, you’re like, well it’s one stop shop, I love this, it’s easy. 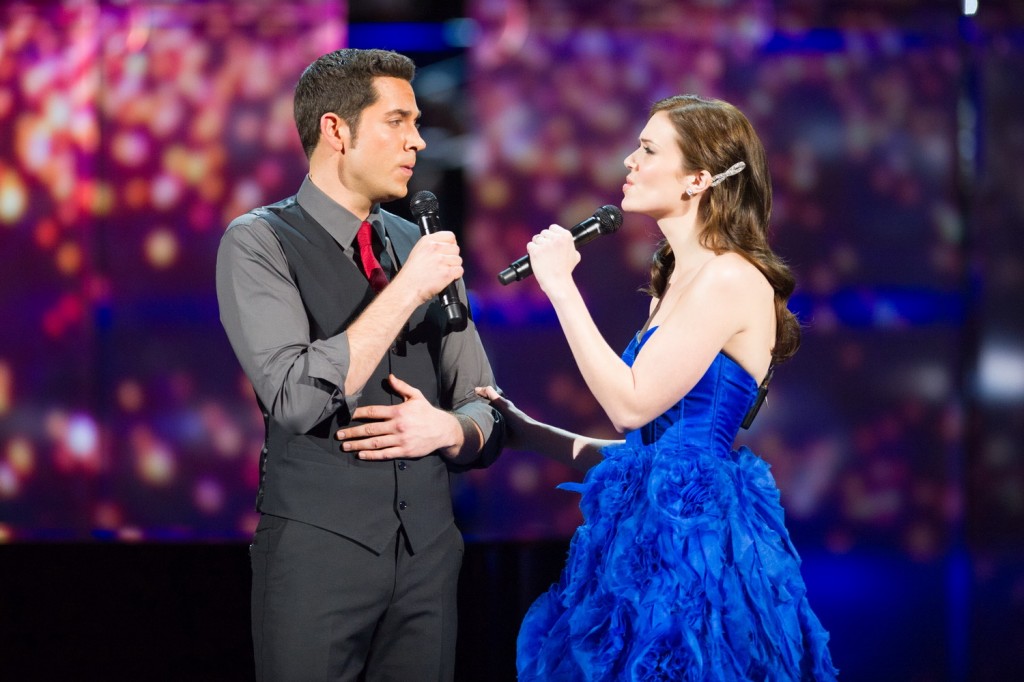 Zachary sang at the Oscars for Disney’s Tangled.  How cool is that?  He didn’t offer up any tunes for us before leaving for the premiere, but he did have a lot to say about singing that night.

ZL:  Ah, the most nerve-racking experience of my life.  I’m surprised I didn’t wet myself at any point during that.  It was a dream come true, but a dream that I didn’t even realize that I had until it was happening.  As a performer, I’ve dreamed about performing on Broadway, and now I’ve finally gotten to do that now, which is incredible and I’m so incredibly blessed to have that opportunity in my life.  I’ve been so blessed on every level.

I literally, since I was a little kid, all I wanted to do was entertain people and do film, television, and theater at the highest level.  God continues to go, here you go, here you go, here you go, here you go.  And I know that doesn’t happen for most people in the world, so I don’t take that lightly.  I’ve not gotten to sing on Broadway.  Other singers dream about doing an album, or want to win a Grammy or something like that.  I don’t think most people sit around as a kid, or even as an adult going, you know what I really dream about doing is singing at the Oscars, it’s such a weird niche little thing.  And then I got to do it, and I was like, oh my god, I’m not only am I doing something that very few people get to do, I’m doing something that very few people even think about ever doing in their life.  And it’s monumental, you’re doing it in front of the largest audience on, that ever see anything televised.  And thank god nobody told me that.   My publicist has the presence of mind to not tell me that a billion people were going to be watching that particular telecast worldwide.  Ah, it was nerve-racking enough.

And then there’s the stars.

We saw all the cardboard cutouts of everybody that’s going to be in those seats, including Haley.  It’s like, all right, don’t look at that one in the front.  I was really calm and a lot, a lot of peace.  And then, the red carpet, that morning, that day comes around, and I’m doing the red carpet at the Oscars.  I’m like, oh my gosh, this is insane.  Talking to Ryan Seacrest, good ole Ry Ry.  And then I get in there and we’re watching, and I’m like, wow, I’m at the Oscars, and we’re doing a thing.  It’s the biggest showsfor, as an actor it’s the biggest thing you could every be apart of.

And then all of a sudden I get the cue – you’re going to be on in about ten minutes.  So then they pull me from the crowd, and I go up, and I’m like, okay, I’m cool, I’m cool.  And the Kevin Spacey introduces Randy Newman.  And Randy does his bit.  And then Randy, and then Kevin comes back out and says, and from Tangled, here comes, Mandy Moore and Zachary Levi.  So Randy’s beginning to finish his song, and it starts dawning on me, I’m like, all right, so he’s going to be done and then Kevin walks out on the stage.  And says, and from Tangled, my heart starts just like pounding out of my chest.  I’m like, oh my god, I don’t know, I can’t do this, I can’t do this, I’m-I’m-I’m-I’m looking for a stage manager, like can I get like a couple more minutes, is that all right?  And you can’t because it’s like its live and its happening.  And you just go into auto pilot and you kind of blackout a little bit.  Not only was I not at all on top of saying don’t look at Haley, all I was saying was just look at Mandy, look at Mandy, look at Mandy.  And I’m looking at Mandy, I’m looking at Mandy, and then we just look into the the lights, they’re shining down.  And really, you can’t see anybody because it’s so bright.  And you just, you finish it, and to try and finish strong.  And I felt like, you know what, hey, we got through it.  I look over and if you look at the footage, I kind of look over at her and I kind of wink at her and smile at her like, hey we did it, we made it through it.  It wasn’t any crazy, crazy mess ups or anything.  Although I didn’t feel great about it, or even slightly good about it, until later when I watched.  And I was like, you know what, that was, that was pretty good, that was pretty good.

This is long, but man, there’s just so much good stuff here!  Zachary was wonderful in giving more that the time promised.  Was even wonderful enough to stop after the premiere to take a photo with one of my fellow blogger friends.  He’s super sweet, very charming, and makes and amazing Fandral! 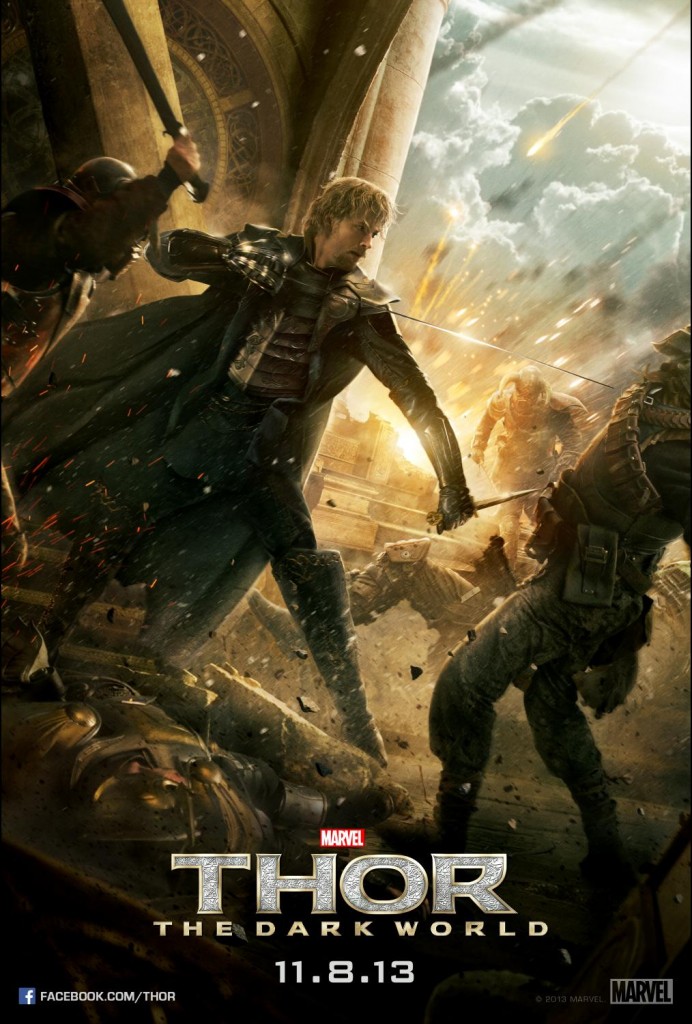 MARVEL’S THOR: THE DARK WORLD is in theaters now!