OZ the Great and Powerful is finally in theaters!  I have been sitting on pins and needles waiting for opening day to arrive!  It’s hard to believe that it’s been almost 3 weeks since I attended the magical premiere of this movie in LA.  When I heard that Oz would be coming out this year I became so excited.  A fan of the original Wizard of Oz film, I mean, I very well could have watched it over 100 times in my life, the anticipation to see this movie had me a little worried – what if it didn’t meet my expectations?  I mean with the incredible cast including James Franco, Michelle Williams, Mila Kunis, Rachel Weisz, Zach Braff and Joey King,  and the amazing director of the Spiderman Trilogy, Sam Raimi – really I don’t know why I thought for a second that I would be the least bit disappointed.  This film is incredible.

Keeping true to the original, Oz begins with the backstory of Oscar Diggs (Franco), a womanizing, small time circus magician in Kansas.  You get a taste of his faults, his humor, and simply, let’s face it, he’s easy on the eyes.  Diggs is then whisked away to the land of Oz in that infamous hot air balloon.  When he lands he thinks he really hit the lotto.  He quickly gets sucked into the world of Oz where he meets the three witches, Theodora (Kunis), Evanora (Weisz), and Glinda (Williams) that are not so easily convinced of him being the Wizard they have all been waiting for to save their precious land.

Oz is cinematic eye candy.  The scenes are breathtakingly beautiful.  The brilliant colors, the fact the sets were tangible makes the 3D experience more than flying monkeys in your face, but rather you feel you are being embraced by this movie.  It’s easy to feel that you too landed from a hot air balloon into this magical place.

It’s funny.  It’s hard to pick a favorite character, but Finley the Flying Monkey (Braff) and China Girl (Joey King) are fantastic.  It’s sentimental, as the relationship of Diggs and China Girl may pull at your heart strings a little.  It’s action packed with flying monkeys and witches.  But most of all it’s magical.  I can’t emphasize enough how much watching this film brings you into the land of Oz and how incredibly amazing they did on making this land so exquisitely eye appealing.

Check out the trailer!  Go see this movie!  Come back and tell me what you think!

So what age is safe to go see this movie?  That’s a tough call.  I have two girls that are now 12 and 15 so they are going to LOVE this film.  But when my oldest one was 3 she loved The Wizard of Oz, she didn’t scare easily, and she would have been fine.  My younger daughter will still find the monkeys scary, but she will still love the movie.  At age 3 though, she would have been very upset and we would have had to leave.  You know your kids.  Maybe consider having a date night and see for yourself if you have young kids if yours could handle the movie.  Regardless, if you are an Oz fan, a movie lover, and love to be taken into another world for a few hours, you will want to see Oz the Great and Powerful! 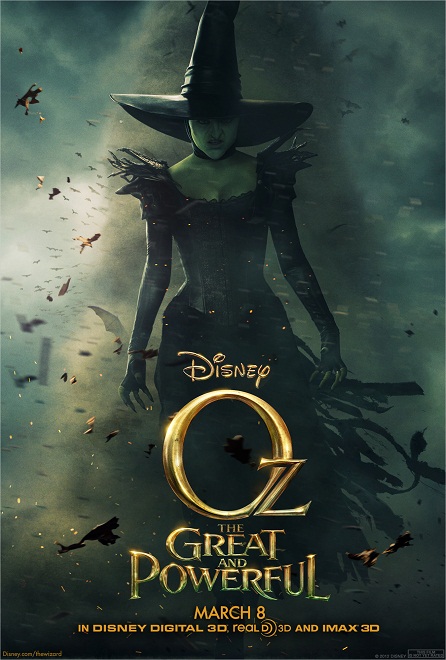