It’s not a secret that Inside Out is one of, if not my all time favorite Pixar movie. I really don’t think I can get tired of this movie or the characters. It’s so funny, heart-felt, and really tells a great story. Please check out my full movie review What is Disney*Pixar’s Inside Out All About? and the hilarious interview with the cast. So of course I am happy to announce that it’ll be available to watch at home on Blu-ray 3D™, Blu-ray™ Combo Pack, On Demand, Digital HD and Disney Movies Anywhere now.

Watch Inside Out Anytime

Do you ever look at someone and wonder what’s going on inside their head? Disney-Pixar’s “Inside Out” takes an exciting and hilarious journey into the mind to find the answer. Based in Headquarters, the control center of 11-year-old Riley’s mind, five emotions are hard at work, led by lighthearted optimist Joy. She strives to make sure Riley stays happy as she operates alongside fellow emotions Fear, Anger, Disgust and Sadness. It’s “an instant classic,” raves Richard Roeper, Chicago Sun-Times. Experience it like never before on Disney Blu-ray! 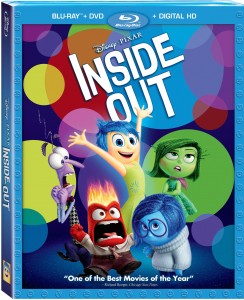 Buy Inside Out Now

Including an extensive line-up of bonus features as well as an all-new animated short, “Riley’s First Date?

Wait until you see the whole thing. This is so funny! And I have lived this, so it’s right on!

*I received the Blu-ray combo pack for review purposes. All opinions are my own.