Walt Disney Studios Chairman Alan Horn possibly the most anticipated panel to get into at the D23 Expo; The Disney, Marvel Studios, and Lucasfilm Live Action Films presentation where they shared their live-action film slates. Filmmakers revealed exclusive news and details about upcoming live-action films and showcased surprise live and video appearances from stars and filmmakers.

The really cool thing about this panel is that it’s always full of epic surprises. Kinda like all the Disney Princesses voice actors coming out during the Disney Animation and Pixar Studios panel the day prior. The announcements were huge, but the people brought up on stage, even bigger.

Yes! I got one of those Ophra mentioned posters. That was all sorts of awesome!

First up, Sean Bailey, President of Walt Disney Studios Motion Picture Production. He shared the overviews of the Disney live-action slate. Looking back at the past few years he talked a little about the live-action films Alice In Wonderland, Maleficent, Cinderella, The Jungle Book, Pete’s Dragon and of course Beauty and the Beast.

A Wrinkle in Time

The morning started off with A Wrinkle in Time by bringing cast members Oprah Winfrey, Reese Witherspoon, Mindy Kaling and Chris Pine to the stage. Also joining the cast was newcomer Storm Reid and visionary director Ava DuVernay. We got a first look at the film’s teaser trailer and teaser poster.

Based on Madeleine L’Engle’s timeless classic, the movie takes audiences on an epic adventure across dimensions of time and space, examining the nature of darkness versus light and ultimately, the triumph of love.

What is a Wrinkle In Time?

Meg Murry (Storm Reid) is a typical middle school student struggling with issues of self-worth who is desperate to fit in. As the daughter of two world-renowned physicists, she is intelligent and uniquely gifted, as is Meg’s younger brother Charles Wallace (Deric McCabe), but she has yet to realize it for herself.

Making matters even worse is the baffling disappearance of Mr. Murry (Chris Pine), which torments Meg and has left her mother (Gugu Mbatha-Raw) heartbroken. Charles Wallace introduces Meg and her fellow classmate Calvin (Levi Miller) to three celestial guides—Mrs. Which (Oprah Winfrey), Mrs. Whatsit (Reese Witherspoon) and Mrs. Who (Mindy Kaling)—who have journeyed to Earth to help search for their father, and together they set off on their formidable quest.

Traveling via a wrinkling of time and space known as tessering, they are soon transported to worlds beyond their imagination where they must confront a powerful evil. To make it back home to Earth, Meg must look deep within herself and embrace her flaws to harness the strength necessary to defeat the darkness closing in on them.

A WRINKLE IN TIME opens in theaters everywhere on March 9th, 2018!

The Nutcracker and the Four Realms

The film mainly takes place in a strange and mysterious parallel world—home to Land of Snowflakes, Land of Flowers and Land of Sweets. But it’s the ominous Fourth Realm where Clara must take on a tyrant called Mother Ginger as well as a gang of mice who’ve stolen a coveted key from Clara.

Said Bailey, “The Mouse King is made up of thousands of mice—a cutting-edge CG creation. But we wanted him to move in a way that would be wonderfully surprising and incredibly cool, so we called on Lil Buck to provide the style of dance that defines the character. He is so talented. The way he makes this character move is unbelievable.”

Los Angeles-based dancer Lil Buck hit the stage at D23 Expo 2017 to demonstrate the kind of street dancing—called jookin—that informed the way his character moves in the film. The performance earned a standing ovation.

Emily Blunt (Mary Poppins) along with director/producer Rob Marshall,  took to the stage to talk about the eagerly-anticipated return of the practically-perfect nanny. This is not a remake, it is an original musical sequel to the 1964 Mary Poppins starring Julie Andrews. In this film Mary and her friend Jack, an optimistic street lamplighter played by Lin-Manuel Miranda, embark on entirely new adventures with the next generation of the Banks family to help them find the joy and wonder missing in their lives.

Offering insight on how she made the character her own, Blunt shared, “I needed to try to pay homage to Julie Andrews, but carve out a new space for myself,”

“And we were very loyal to the books.” Rob Marshall shared, “I was incredibly honored to be approached by Disney about directing a sequel. This is a brand-new original film musical from top to bottom, which is very rare, and it is a wonderful opportunity to create something specifically for the screen.”

P.L. Travers first introduced the world to the no-nonsense nanny in her 1934 children’s book Mary Poppins. However, the subsequent adventures of Mary Poppins remained only on the pages of the seven other P.L. Travers’ books…until now.

Mary Poppins Returns is directed by Rob Marshall. The screenplay is by David Magee, and the screen story is by Magee & Marshall & John DeLuca based on The Mary Poppins Stories by P.L. Travers. The producers are Marshall, DeLuca and Marc Platt with Callum McDougall serving as executive producer, and the music is by Marc Shaiman with songs by Shaiman and Scott Wittman.

Tim Burton didn’t make it to the D23 Expo 2017. He did however, still made a point to greet fans from across the pond. Burton is busy directing his next project—a live-action reimagining of Disney’s 1941 animated classic Dumbo.

“Dumbo was always one of my favorite Disney films,” said Burton. “We’re trying to give it the same heart, feeling, and emotion that we all loved about the original.”

The film stars Colin Farrell as Holt Farrier, a former circus star and war-veteran charged with the care of a newborn elephant whose oversized ears make him a laughingstock of an already struggling circus. Nico Parker and Finley Hobbins were cast as Holt’s children, who discover that Dumbo can fly. Danny DeVito portrays circus owner Max Medici who tries to capitalize on the novelty. And Michael Keaton is persuasive entrepreneur V.A. Vandevere who swoops in with aerial artist Colette Marchant, portrayed by Eva Green, to make Dumbo a star.

The D23 Expo crowd with a special look at director Jon Favreau’s new live-action take on Disney’s 1994 classic animated film The Lion King. He blew our minds with his vision coming to life in the live-action remake of The Jungle Book. Favreau gave us a look at the opening scene to the new film. The technology team behind the movie are introducing all-new filmmaking techniques that promise striking visuals never before seen on the big screen—bringing celebrated characters to life in a whole new way. This is am looking forward to seeing. The little bit we saw brought tears to my eyes. It’s beautiful!

“This is a story that belongs to everyone who grew up with the original film,” said Favreau. “I wanted to demonstrate that we could be respectful of the source material while bringing it to life using new techniques and technologies. We wanted to do something special for the D23 Expo audience and give them a first look at what we’re up to.”

The Lion King is one of the biggest animated films of all time; with a lifetime global box office gross of $968.8 million. It won Academy Awards® for the original song “Can You Feel the Love Tonight” (Elton John, Tim Rice). Also for original score (Hans Zimmer). In 1997, the stage production inspired by the film made its Broadway debut, winning six Tony® Awards; 19 years later, it remains one of Broadway’s biggest hits. 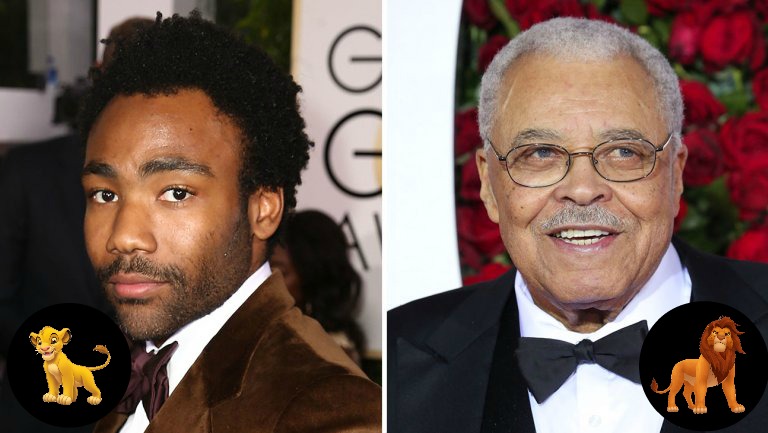 Rian Johnson, the writer, and director of the latest chapter in the Skywalker saga, Star Wars: The Last Jedi. Many of the cast were there including Mark Hamill, Daisy Ridley, John Boyega, Gwendoline Christie, Kelly Marie Tran, Laura Dern and Benicio Del Toro. Here’s a special sneak peek of behind-the-scenes footage from the highly anticipated movie as seen at D23.

Feige unveiled the Marvel Studios’ official 10th-anniversary logo to the audience. Marvel Studios’ 10th anniversary begins with the release of Avengers: Infinity War. It covers an impressive decade of Marvel Studios’ blockbusters released from 2008 through the Avengers untitled film in 2019. In celebration of the anniversary, fans can expect exclusive consumer products and collectibles, along with in-theater events and much more in the coming months.

Then, THE surprise of the day was from the talent from the film making a grand entrance. Robert Downey Jr., Chris Hemsworth, Mark Ruffalo, Anthony Mackie, Elizabeth Olsen, Paul Bettany, Benedict Cumberbatch, Tom Holland, Chadwick Boseman, Josh Brolin, Don Cheadle, Sebastian Stan, Dave Bautista, Karen Gillan and Pom Klementieff. To top it all off, the thrilled fans got an exclusive early look at footage from the movie, introduced by Joe Russo, one of the directors.

An unprecedented cinematic journey ten years in the making and spanning the entire Marvel Cinematic Universe. Marvel Studios’ Avengers: Infinity War brings to the screen the ultimate, deadliest showdown of all time. The Avengers and their Super Hero allies must be willing to sacrifice all. This is in an attempt to defeat the powerful Thanos before his blitz of devastation and ruin puts an end to the universe.

Here are a few other movies that are in pre-production that Sean Bailey mentioned during the event as well.

A live-action take on Disney’s 1998 feature, which will be helmed by Niki Caro (McFarland, USA).

A live-action nod to the popular theme park ride.  The studio is working with Dwayne Johnson, recently heard as Maui in Moana, on the project.

Directed by Guy Ritchie, with Mena Massoud as Aladdin, Naomi Scott as Jasmine and Will Smith as the Genie. 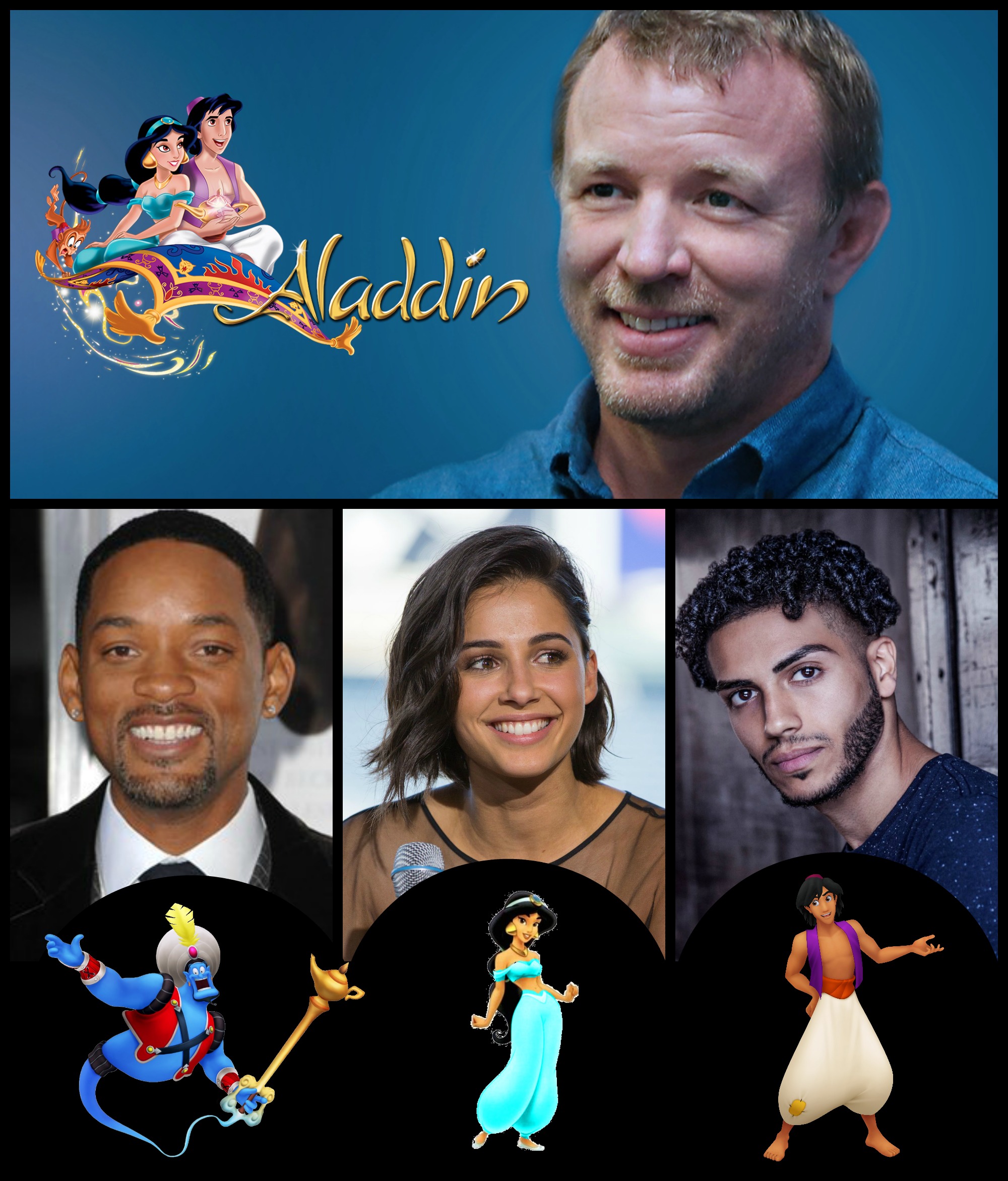 *Disney invited me to attend the D23 Expo to share all I learned with my readers. All opinions are my own.